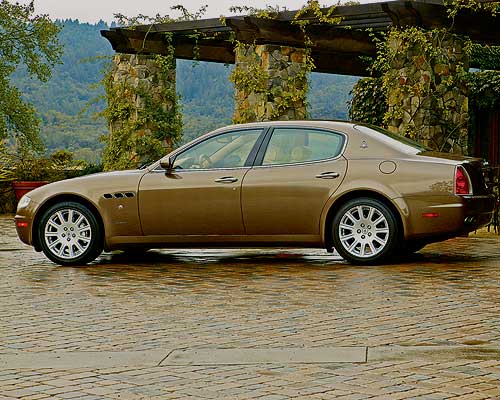 If the meaning of the Maserati Quattroporte’s descriptor is not obvious, it is Italian for “four doors,” but it does not refer to something stodgy, slow, sensible, and Omaha suburban. This is an Italian sports car that, with a top speed of 170 mph, could have outrun Hurricane Andrew. It is quicker to 60 mph than just about any other four-door, save those few Mercedes that have been tinkered with by AMG.

It is luxurious, almost to excess, with an interior that lacks little—certainly not glove leathers, gorgeous woods formed into a solid walnut cascade curving from dash to floor, and reclining rear seats that, through an options package, include heating, cooling, and massage functions.

Low and 161¼2 feet long, the Quattroporte appears subtle, affable, and far removed from suggestions of brute power that do little but add intimidation to the shape of any car. The grille displays horizontal bars in a frame the shape of Maserati’s old racers. Dead center, mounted bold and almost oversized, is the company’s trident emblem—which is, incidentally, a reference to a well-known statue of Neptune in the city of Bologna, where Maserati was founded in 1926.

The fuselage appears to be somewhere between svelte and healthy, with a mild hump in the rear roofline that not only expands headroom for passengers back there, but softens a rear end that is a little too abrupt on Maserati’s Coupe and Spyder. Our only complaint concerns the addition of nonfunctional front-fender portholes reminiscent of no Maseratis within our ken, only of ’50s Buick Roadmasters.

The car is driven by a 400 hp V-8, with a 6-speed transmission activated by paddle shifters tuned for just the right touch, just the correct shift intervals. Even the formerly dreadful automatic mode of the prototypes has been remapped by many milliseconds until it is creamy enough for Los Angeles’ surface streets at crush hour. If all of this has the Quattroporte sounding like a mini-Ferrari, well, that is exactly the intention of parent Ferrari, which took over the crippled company in 1997.

Despite all of this allure, Maserati has yet to capture a large audience in America since its reinvention and return to this country five years ago. Few of our Car of the Year participants knew much about the brand beyond its history. Even fewer had seen a Quattroporte. But it is a tribute to the car, its styling, and a real-world performance envelope ranging from relaxed to raucous, that it rapidly converted the unaware to the appreciative. They admired the looks and particularly the loveliness of the interior, were impressed by the civilized yet lusty performance, and applauded the exclusivity of the product and the distinction that it would bring to their lives. And for an Italian dark horse, the Quattroporte scored remarkably well in their final judgment, seeming to suggest simply that, like Rome, Maserati’s reputation will not be built in a day.