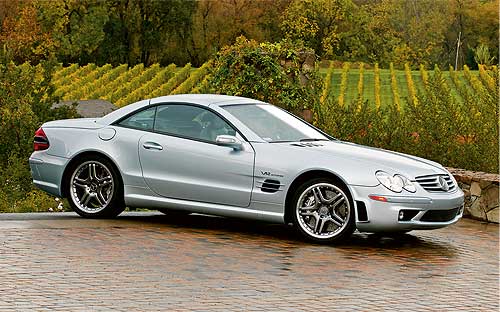 Excepting the exotic SLR, the bad boy in the Mercedes-Benz convertible clubhouse is the SL55’s bigger brother, the SL65. It is an amazing creation in terms of engineering, and its stealth factor is second to none. The car is a brute in a Brioni suit. It is not a well-dressed gentleman, as one might imagine the other SL roadsters to be. Like a bodybuilder with cartoon-character musculature, the SL65 is impressive but perhaps off-putting to those seeking a truly balanced performance car. Certainly, the tremendous horsepower and the even more astonishing torque of the twin-turbocharged V-12 guarantee bragging rights, but then, gentlemen who brag cease to be gentlemen, and the SL65 begs the question: For whom is this car made?

This top-of-the-line SL possesses a temper that flares like that of a muscle man on steroids: Provoke the throttle and all hell—and the rear end—breaks loose. Not that it isn’t fun to torch the rear tires as the turbos spool up, and the monster motor instantly pins driver and passenger (the latter should be diapered) to their sumptuous seat backs. But such antics eventually become tedious to all but the simplest simpleton, and one is left with a car whose attributes teeter on the precipice of overkill for real-world driving.

Of course, this rarest of SLs is endowed with underpinnings—chassis, suspension, and brakes—that are the equal of the car’s prodigious power plant. The brakes are mightily impressive: linear and completely reassuring. Not much is left to chance, unless the hapless driver fails to undertake measures of self-preservation such as ensuring that the traction control is on at all times. Natural selection will quickly eliminate those not respecting the laws of physics. The car is solid as a pillar at Thebes, but light on its feet it is not. I suspect that if we were not so enamored of the SL55, the SL65 would fare better subjectively. But the 55 does feel better-balanced, lighter, and more of a piece. It is a more enjoyable car to drive than its bully brother.

The SL65 is distinguished by a more aggressive front and rear end treatment than its underlings, as well as discreet “V12 Bi-turbo” text on the front fender. Perhaps our example was atypical, but fit and finish were not quite what we expect from the Germans. Some gaps were capacious, and the beautiful blue metallic finish was not consistent from panel to panel. Not a deal-breaker, but worth noting.

Lest we editors be accused of holding such a highly esteemed marque as Mercedes-Benz to a higher standard, remember that the SL65 is intended for the real world, unlike the SLR, Enzo, and other over-the-top exotics that exist only to prove a point and delight their owners on the weekend.

Among top-down GTs, the sensible and more-than-adequate choice is the 2003 Robb ReportCar of the Year, Mercedes’ own  SL55, still the benchmark of the class.