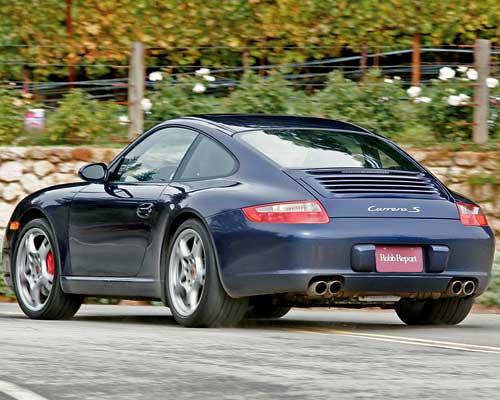 Whenever I get my hands on the latest 911, I cannot help but compare it with its predecessor. True confession: I never really loved the 996, despite using one as a daily driver for many years. It was more a marriage of convenience, a union loyal and dutiful but without the passion shared with the air-cooled 993—a car that was not as refined as the water-cooled 996 but which looked and felt so much more like a Porsche.

While looks are not everything in a relationship, they are the catalyst for attraction. So it is with the 997, which, with its oval eyes and fenders flaring shelflike over the rear wheels, once again resembles a proper 911. The 19-inch wheels of the Carrera S are the most attractive rims since those on the Carrera Cup design of the early ’90s, and they contribute to the S’s aggressive and surefooted stance. Where the 996 seemed unfinished without GT3-style rockers, the 997 is complete right out of the box.

But the beauty of the new 997 goes far beyond appearance. It’s funny how many incremental improvements can coalesce to effect a major change in a car’s character. Everything about the 997’s performance is better than before. The Carrera S engine produces an additional 40 hp compared to the 996’s. The vehicle’s Porsche Brembo brakes—always the best in the business—are as reliable as ever. This car defines handling and delighted every member of our Car of the Year team. Drivers who were not yet members of the Porsche Deification Society acknowledged that the 997 was the car to beat in the fun-to-drive department.

Special accolades must go to the 6-speed manual transmission, maybe the most responsive gearbox ever. While the 996 could be somewhat rubbery and indistinct, the 997 delivers crisp, sure shifts that make stirring the box a pleasure, not a chore. Clutch take-up confounded some drivers, until they got their footwork in order.

The interior has seen the most improvement over the ascetic 996. The latest design is more interesting to view, and the materials and surfaces feel better, too.  Ergonomics, seating, and instrumentation are superb. The sport seats were comfortable and made the drive from L.A. to Napa an only-stopping-for-gas affair.

The 997 represents a relative bargain in the luxury personal car arena. However, the vaultlike aura of earlier models may have spoiled us, because in some respects the 997 seems awfully lightweight. The hood, for instance, is wafer thin, with edges and underside that do not indicate the same level of quality apparent with an older 911. But for all the cost- and weight-saving measures, the car is solid and conveys a feeling of substance, if not opulence, which is consistent with the Porsche credo. This car possesses what I call the 3 Ps: provenance, precision, and performance. The beneficiary of more than 40 years of continuous improvement, the 911 remains the quintessential sports car.