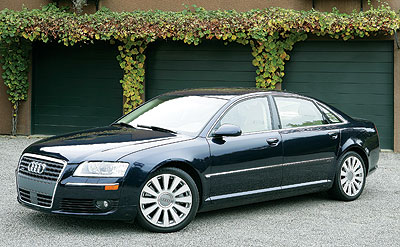 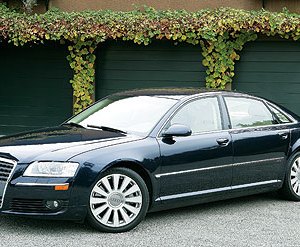 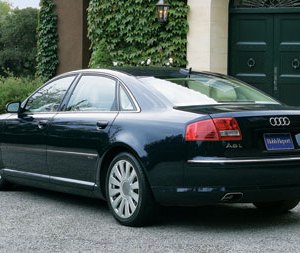 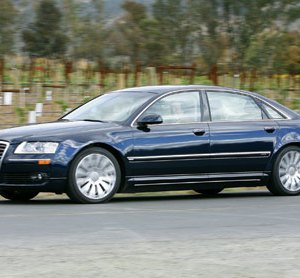 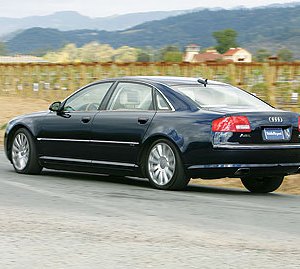 Audi’s A8 L W12 was the tuxedo in our wardrobe of beautifully tailored driving machines. It carried itself with Department of State formality on a wheelbase of near-limousine dimensions. The deep, bottomless azure paint coating its exterior added to the car’s evening-wear elegance, and with enough insulation to reduce a Boston Pops performance to an echo, it moved across the Napa landscape as a whisper.

Add an interior of blond woods and perforated Valcona leather, a DVD system buried in each rear headrest, adaptive cruise control to help avoid the embarrassment of rear-enders, four-zone heating and cooling, Bose 12-speaker sound, Bluetooth and voice control for the phone, radio, CD, and navigation systems, and here was a car every centimeter the European luxury classic.

The A8 L offers all of these features and Audi’s acclaimed Quattro all-wheel drive and all-wheel traction controls, which at last count had prevented worldwide something like 1.7 million trips into the weeds.

The heart and soul of Audi’s all-aluminum, long-wheelbase (hence the L following the A8) flagship is its 6-liter, 450 hp W12 (yes, Virginia, it is two V-6 engines mated side by side into a single powerplant) borrowed from the Phaeton, the sportier—and heavier—banner carrier for parent company Volkswagen. (A steel version of the A8 L would be more than 1,000 pounds heavier than the existing car.) Although large even by Big Three standards, the car has sublime grip and superb agility because of its hydraulic suspension, Quattro, and a stiff chassis.

The 6-speed automatic transmission with Tiptronic is equipped with a system that monitors a driver’s style and adjusts shift patterns accordingly. As for safety features, should events become unpleasant, sensors not only deploy air bags and curtains but also switch on hazard and interior lights, shut down the engine and fuel pumps, and unlock the doors.

All such things considered, Audi’s finish in a tie for seventh place, right at the midpoint of the pack, may well be viewed as a motive for starting World War III. The best explanation for its ranking is that the A8 L is too smooth, too elegant, and so perfect that it loses a little personality, even some soul. As Car of the Year judge Bob Bailey suggested, “It may be too understated for its own good.”

However, designers of the Audi A8 L may find some solace in knowing that none of the judges had anything bad to say about the car. “The blond woodwork with cream-color leather is stunning,” said Gary Michelson. “It drives quietly but carries a big stick. This is a muscle car for an ambassador,” added William Weidner. “This is a car for someone who enjoys aggressive engines but doesn’t have a need for attention,” noted Linda Morris. “It is for someone who is comfortable in his own skin,” concluded Nicolas Liakas. “It’s not flashy, but it still implies success.”

Twentieth-century British philosopher and mathematician Bertrand Russell once said that music or literature devoid of flourishes and trappings is reduced to mathematics. In the case of the Audi A8 L, elegance and efficiency minus flair added up to seven.