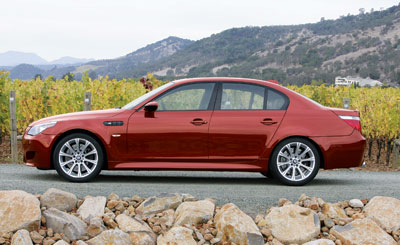 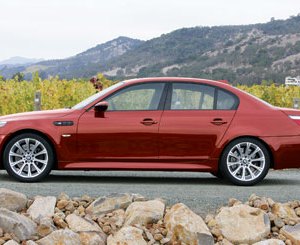 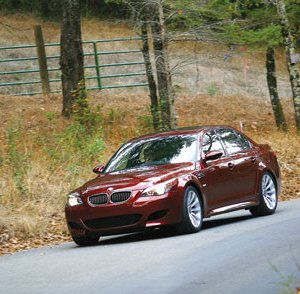 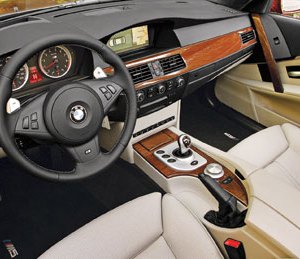 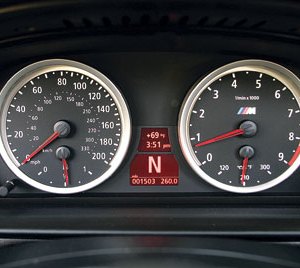 Few events stir more memorable moments than baseball season openers; the third Thursday of every November, when the Beaujolais Nouveau is uncorked; and the introduction of any BMW bearing an M badge. That single initial always has designated the addition of a Motorsports performance package to BMW’s sedans and coupes, which already drive dramatically quick and handle superbly. Indeed, the company slogan about building the ultimate driving machine is considerably more than marketing hyperbole.

Thus our panel of driving enthusiasts greeted with some noticeable salivating the announcement that a 2006 BMW M5 would be among the 14 finalists for the Car of the Year title. Its specs alone suggested that this car would be one of the favorites.

Other carmakers, when creating their performance versions of fairly vanilla vehicles, heavily tweak and polish the basic mechanicals of the chosen model, but for the M5, BMW replaced the inline 6 and V-8 engine of the 5 Series with a unique 5-liter, 500 hp V-10. The M5 is available with a 7-speed sequential gearbox or a 6-speed automatic with an engine redline set north of 8,000 rpm. In combination with the engine, either delivers a zero-to-60 time of 4.5 seconds and a top speed that is clipped at 155 mph. Ungoverned, the M5 would be good for 200 mph.

All of this speed and power is contained in a front-engine, rear-drive four-door devoid of spoilers, flares, and carbon-fiber tidbits. It is styled to the right of center because BMW originally built the 5 Series to carry families, groceries, beagles, and the weekly dry cleaning.

Yet the M5 could climb no higher than the seventh spot in our voting because BMW was overly zealous in its use of technology, equipping the car with an abundance of tricks straight from Hogwarts School of Witchcraft and Wizardry. Complex electronics and nearly unfathomable controls should not be the price of innovation and the prize of progress. The essential truth is that any car, regardless of its performance envelope, should be capable of being controlled instinctively—and not just by MIT graduates who have taken a full complement of Bob Bondurant driving courses.

The M5 carries enough computer capacity for the next space shuttle mission. Its engine management system alone is monitored by 32-bit processors capable of handling 200 million equations per second. BMW also has equipped the car with SMG, EDC, VANOS, ECU, ABS, DSC, and LC (or launch control, for smoother, quicker takeoffs than mere humans can accomplish). And there still is the cumbersome iDrive, which activates most of the auxiliary systems and even may be capable of calculating the most comfortable distances between restroom stops—for each passenger. “That annoying iDrive can’t be shut off,” complained Herb Harris.

Several judges also grumbled about a transmission that they said lagged and slapped regardless of which mode they selected. “The transmission is obnoxious,” noted Gary Michelson. “It dies and then goes. I thought there was something malfunctioning.” Barbara Crown was not alone in reporting difficulties in sorting out the stalks and paddle shifters, which are attached to the steering wheel rather than the column. “I went to shift gears and washed the windows,” she said.

However, no one found fault with the M5’s acceleration, handling, response, styling, brakes, or steering. And no one objected to the concept of a four-door sports car, which is how BMW is presenting this car.

Perhaps owning an M5 is rather like joining in holy matrimony: It requires experience, patience, a little higher learning, and most certainly the ability to adapt.