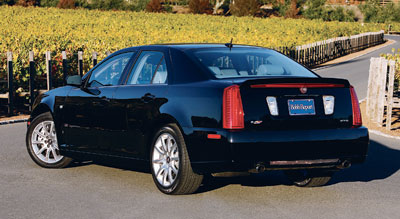 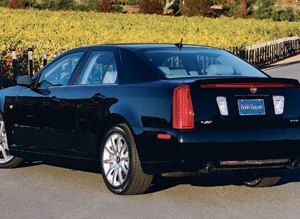 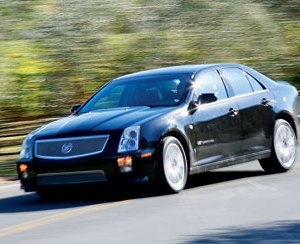 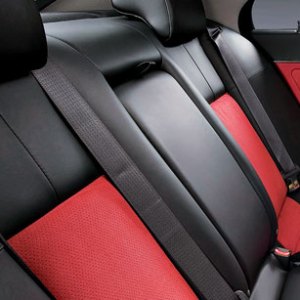 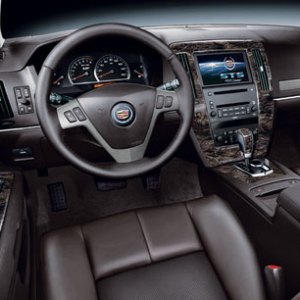 In building the STS-V, the hot rod version of its stately STS sedan, Cadillac affixed a supercharger to its Northstar V-8, creating the marque’s most powerful engine ever. Fitted neatly under the STS-V’s bulging hood, this V-8 breathes with 10 to 12 pounds of boost, which contributes to its total output of 469 hp and 439 ft lbs of torque. Doling all that motivation to the 19-inch rear wheels is a 6-speed Hydra-Matic automatic transmission that shifts itself from zero to 60 mph in less than five seconds.

While the engine alone might be enough to impress under different circumstances, at the Car of the Year event, 469 hp is just the price of admission for a sports sedan. The Mercedes CLS55 AMG offers the same output, and the BMW M5 raises the bar with a 500 hp V-10 motor. Our alphabetical road-testing rotation had drivers hopping out of the M5 and into the STS-V, making for a salient sedan comparison.

Most of our judges had hoped their homeland car would fare better against one of Bavaria’s best. “As an American, I wanted the Cadillac to be good,” said Bob Morris. “But as a driver, I have to say that it is not.” Garen Staglin echoed that sentiment: “The STS-V is not in the same league as the M5.” It is, however, in the same price range, which some found surprising. “If the STS-V cost $48,000, it would be a player,” said Dan D’Agostino. The base STS sedan, it should be noted, does start at less than $42,000.

Of our trio of performance sedans, the Mercedes garnered kudos for its unique design, but the appearances of the BMW and the Cadillac failed to impress. William Weidner referred to the Caddy’s “Cubist exterior design” as something that only an art lover could appreciate. The interior fared even worse, being described as “tacky” by one judge.

But all was not lost. Many of the judges were encouraged by Cadillac’s effort; Bill Harlan noted that the STS-V is “easy and bulletproof to drive.” Still, the consensus seemed to be that General Motors has a ways to go before its top-of-the-line sports sedan catches up with the Germans’. As Scott Kriens said, “This car is not bad at all; it’s just not good enough.”