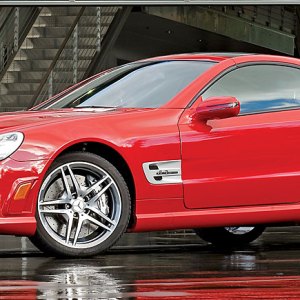 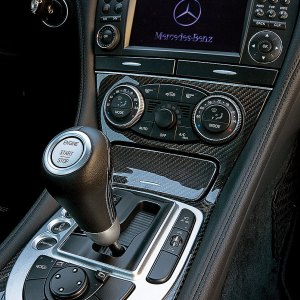 That the Mercedes-Benz SL63 AMG placed second in this group testifies to the hardiness and resiliency of the SL platform, which won back-to-back top honors in this competition—first as the SL500 and again as the SL55 AMG—more than five years ago. Of course, near perfection never loses its appeal. Although it is basically the same vehicle today as it was then, the SL has received a few thousand updates in the interim—among them a new V-8 engine that develops all 518 of its horsepower without resorting to the artifice of superchargers. The new feature that stole the show, however, is the vent in the seat that blows heated air on your neck—an amenity the vehicle borrows from its smaller sibling, the SLK. Such attention to detail explains why Mercedes-Benz has been building automobiles longer than anyone. —Gregory Anderson

This latest in Mercedes-Benz’s maturing yet still ultraluxurious lineup comes with a new 6.2-liter, one-man-built engine from AMG, the company’s in-house performance shop. The supercharger from the retired SL55 has been dumped, power has been improved, exterior and interior visuals have been updated, and Mercedes-Benz’s new multiclutch technology has been mated to a 7-speed gearbox with more legs than a chorus line. Yet the car’s mien is ultimately responsible for its strong appeal: With its hard top retracted, the SL63 is a sensationally comfortable, easy-driving cruiser; with the roof up, it is a serious sports car that will keep its owners satisfied, exhilarated, and quite pleased with their driving prowess. This vehicle does it all quite beautifully, leaving nothing to be desired. —Paul Dean

Mercedes’ SL line suffers unfairly from the “grandparent factor.” It is the car most often associated with the open- and closed-top meanderings of seniors who have accomplished much and have a three-pointed star in the garage to show for it. Settling into the driver’s seat conjures images of lazy days in the wine country with nary a worry about how the grandkids are doing.

Starting up the engine, however, quickly belies this stereotype. The SL63 AMG (and here we are not talking about the ridiculously tweaked Black Series version of the SL) is a time machine of sorts, shedding years off the age of anyone who hops aboard. The engine’s robust growl seems to encourage the bad-boy shenanigans of youth. This may not be the most original car in this year’s competition, but what it lacks in originality the SL63 AMG makes up for in an admirable combination of low-end grunt and bulletproof assembly. —Marco R. della Cava