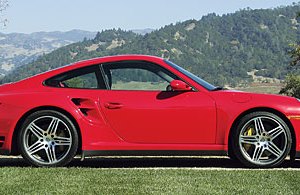 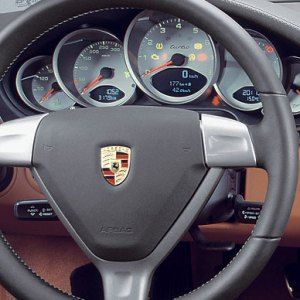 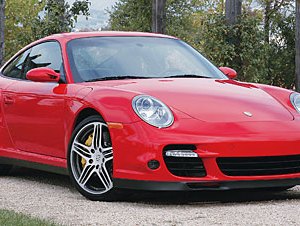 The first Porsche 911 Turbo hit the streets more than 30 years ago, and depending on one’s perspective, the latest, greatest, sixth-generation Turbo can be considered either a descendant from that car or a prototype of cars to come, or both.

As unlikely as it may sound, the late Ferry Porsche—the engineer, inventor, and visionary designer who built the original, non-turbo 911 in 1964—also is the man ultimately responsible for the highest-ranked sports car among our Car of the Year entries. The new 911 retains the same basic rear-engine pattern that Porsche pioneered, though a number of new items have been added. Among these are all-wheel drive with stability and traction controls; a 3.6-liter, water-cooled 6-cylinder engine that spools out 480 hp and as much as 505 ft lbs of torque through variable vane twin turbochargers; a Tiptronic transmission; a hydraulically operated rear spoiler; and ceramic composite brakes.

Thus the car that our participants judged, the 997 generation of Ferry’s 911, was a Guards Red blueprint for the perfect driving experience, particularly along the winding roads of Napa Valley. “It’s so drivable you just don’t want to give up the keys,” Steve Levitan, whose daily driver is a Cayenne, lamented after his stint behind the wheel. One driver after another echoed Levitan’s sentiments. “Wow,” said Todd Thomson. “I didn’t want to get out—speed, handling, comfort—an amazing driver’s car.”

The 911’s longevity indicates that the car has been among the simplest, fastest, easiest-to-drive, most pleasurable cars on the planet since its introduction. Bruce Meyer, a longtime Porsche enthusiast, noted that the 911 “probably [has] the broadest range of potential buyers, [from] 20 to 80 years old.”

If Meyer is correct, and the 911 has such wide appeal, its production run could last another four decades, at least, without significant alterations in its appearance. That would not displease our judges. “Is the styling dated, or classic?” Thomson asked rhetorically. While automobile designers routinely pilfer from the scrapbooks of their predecessors for taillight clusters (see the Jaguar XKR), grilles and door scoops (the Bugatti Veyron 16.4), or entire cars (the Ford Shelby GT500), the Porsche 911 represents uninterrupted automotive evolution.

“It’s what you think of when you think of a sports car,” said Larry Maguire. Indeed, the 911 Turbo does not waver from its sporting purpose, a point Frank McCourt noted. “What you see is what you get,” he said. And what you get is a rear-engine, four-wheel-drive, two-seat sports car with handling so precise, said Scott Gregorchuk, that “this car understands what the road is thinking.”