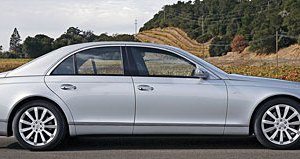 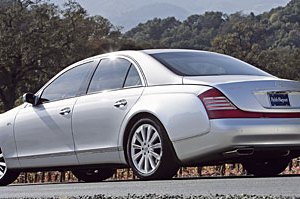 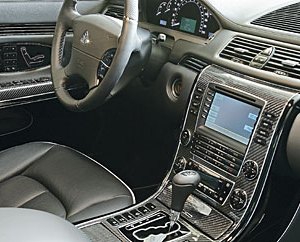 Conventional wisdom says that while a Rolls-Royce fairly screams money and status, a Maybach, a less recognizable marque, is more likely to whisper wealth. Phantoms form a line leading to the red carpet, but a Maybach steals its occupants to the side entrance. The car is not flashy: Maybach’s S models are available in either silver or black, and the seats are upholstered in either black leather with black or silver piping, or white leather with black piping. Carbon fiber and piano-black trim complete the interior palette. You rarely see the sedans, because they are so exclusive—Maybach annually sells fewer than 500 cars worldwide—and because they appeal to the more reclusive. As Thomas Detelich observed, the Maybach is “for someone who doesn’t want to be noticed.”

Until recently, you could have argued that a Maybach also was well suited to someone who does not want to drive. With the arrival of the S edition, however, those days have passed. In an attempt to redefine itself as something other than an anonymous alternative to a Rolls-Royce, Maybach has built a proper driver’s car, “a big car that doesn’t feel like a big car,” as Brian Cobb put it. Imagine instructing your driver, “Home, James, but first stop off at the Skip Barber Racing School for a few brush-up laps.” If an ex–Indy racer were seeking employment as a chauffer, the Maybach 57S surely would be his luxury limousine of choice.

The S signifies that the car is special, or sportier, or in many eyes just plain superior to the standard 57, because of its lower ride height, firmer dampers, and greater performance. The underpinnings are made by Mercedes-Benz, as is the handbuilt, 6-liter, 604 hp, twin-turbocharged V-12 engine that resides beneath the double-M hood ornament. (The same motor powers the Mercedes-Benz S65 AMG that finished in second place among the Car of the Year entries.)

The Maybach would seem to offer much more than its Mercedes-Benz sibling, yet it finished three spots lower in the standings. Timothy Ciasulli suggested that the Maybach’s $375,000 price tag may have put off some judges. “I’m not sure the brand name entitles them to charge that much, and I’m not sure they have done enough to promote the brand,” he opined.

Despite its qualities, the Maybach had other detractors. “Why-bach?” Steve Levitan mocked. “I don’t understand its purpose. It reminded me of a preppier Rolls-Royce on the inside, all dressed up to go to a hip club. But what is it? Why would you prefer the Maybach over the [Mercedes-Benz] S65?” Others expressed similar sentiments. “I just don’t understand why it’s $200,000 more than the S65,” Michael Meldman said. Darryl Frank noted, “I’m not sure it’s worth 200 grand more than the S65 Mercedes, but it handled a bit better, and the interior was a bit more high-tech.”

Its price notwithstanding, the Maybach 57S does present one of the best arguments for giving the chauffeur the night off.