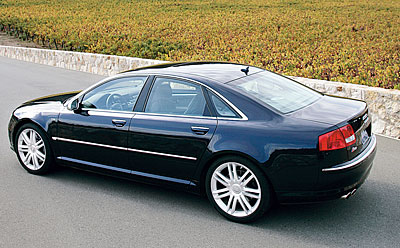 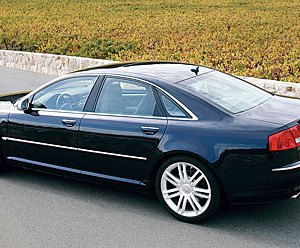 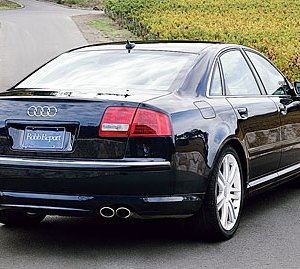 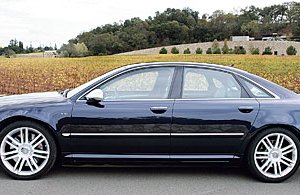 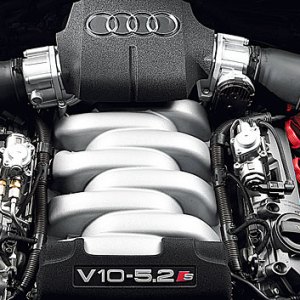 Audi’s new version of the S8 exceeded the expectations of many participants in this year’s event. They were surprised that this S8 was even better than its predecessor, and that it possessed more personality and sporting character than its tasteful, understated styling suggested. But both are characteristics common to most of the marque’s recent models: They keep getting better, and their looks are deceiving. Whether the S8 is the best Audi ever depends on whether one views the cars from Ingolstadt as agile sport machines or full-fledged luxury sedans.

The S8, a unique automobile in many ways, marries both visions without sacrificing either performance or comfort. A state-of-the-art aluminum chassis and a body of the same material establish the highest standard for finish. The car’s weight is relatively minimal, and panel gaps are nearly nonexistent. Inside, no amenity is wanting, yet the layout, ergonomics, and overall design are so well integrated that nothing stands out as flashy or singularly remarkable—a hallmark of a car meant to be driven for long distances in total comfort.

“It is as smooth as butter,” said Todd Thomson. Timothy Foo agreed, crediting the S8 with a “serene and civilized driving environment.” (A longer-wheelbase A8 that affords even greater legroom for backseat occupants is available with the W-12 engine familiar to Bentley Continental drivers.)

As smooth, serene, and civilized as the S8 may be, under its hood lurks a monster, the same normally aspirated V-10 engine that powers the Lamborghini Gallardo. (Audi and Lamborghini both are owned by Volkswagen, and Audi developed the new powerplant for the Italian sports car with an eye toward installing it in some of its own models.) With the Lambo engine, the big sedan delivers performance in league with that of BMW’s M5 and nearly equal to that of the big, blown Mercedes. Yet this V-10 has a character all its own, and, when combined with a seamless transmission, generous brakes, and sporting but supple suspension, it makes this sedan an unqualified winner for drivers who want it all without the flash and love-it-or-hate-it styling of most other high-end marques.

One feature merited special mention by a few participants. “The B&O system rocks,” enthused Mike Yager. The superb sound system, developed by Bang & Olufsen, features two sexy little drivers that rise like periscopes from either side of the dashboard to create a dramatic soundstage more akin to a high-end home rig than anything previously encountered in an automobile. Understatement has its limits.