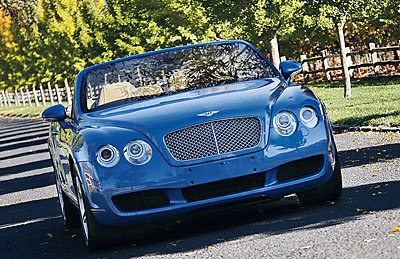 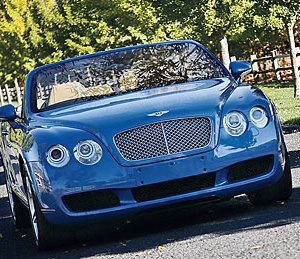 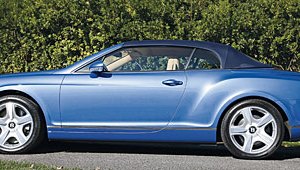 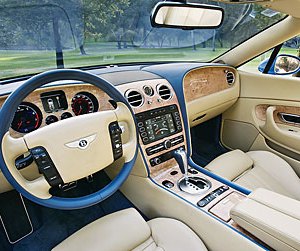 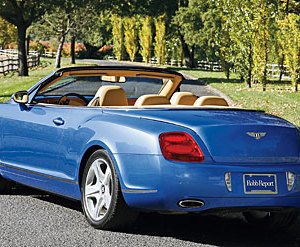 As a prototype convertible made the rounds from one Bentley showroom to another last summer, Robb Report senior correspondent Paul Dean traveled to Miami to drive the latest member of the Continental family—a clan that now consists of the patriarchal Continental GT coupe, a sedan known as the Continental Flying Spur, and this blue-hued, all-new convertible. In the August 2006 issue of Robb Report, before this car was commended by Car and Driver, mentioned by Motor Trend, or revealed by Road & Track, Dean described his ride in the Bentley Continental GTC.

In an attempt to keep news of the existence of such a vehicle from leaking to the masses, we concealed the GTC beneath a cover that featured a triumvirate of disparate American muscle cars: the Cadillac XLR-V (our 13th-place finisher in this year’s Car of the Year competition), the Ford Shelby GT500 (10th place), and a classic roadster from the So-Cal Speed Shop. The Bentley story lay deep within the issue, nestled between yarns about yachts and watch winders.

The truth is, we may have featured the GTC more prominently if we had been more impressed with how the automobile appeared in our photographs. “It looks rather like a shoe,” one staff member proclaimed upon seeing photos of the car for the first time. Two-dimensional images, however, cannot adequately represent the GTC’s most endearing attributes, such as the two-tone leather-swathed steering wheel, which, according to Bentley, takes someone three days to stitch together, and the Breitling clock in the dash. And no visual medium can convey the throaty roar that emanates from twin oval exhaust pipes and that, owing to the car’s retractable top, greets the ears unimpeded.

To view the Continental GTC in the flesh is to understand its overwhelming appeal. “It’s the total package,” Joe Blancato mused the night he arrived in Napa. “I already have one on order.” After driving the car at our annual affair, eight other judges added their names to the list of patient customers.

There was no call for a recount of Car of the Year voting; this was a landslide victory in which the GTC earned first-place votes from nearly half of the members of the constituency, and it was among almost everyone’s top three.

In the August story, Dean called the GTC “the third ace in a full house, the third member of a trifecta, the completion of a hat trick.” Henceforth, we can refer to it as our 2007 Car of the Year, though it almost belonged to a Car-of-the-Year hat trick for Bentley. The Continental GT grabbed our judges’ hearts and our highest automotive honor three years ago as the 2004 Car of the Year. Then 12 months ago, the Continental Flying Spur came within a hair’s breadth of the trophy, finishing second only to the superb Ferrari F430 Spider.

Perhaps our judges have a thing for driving fast convertibles down Silverado Trail in harvest season, or perhaps W.O. Bentley’s spirit has avenged a loss to Enzo Ferrari. “It is a luxury car, but it is as quick as my 430,” said Jamie May. “I’ll be getting one, and I’ll be trading in a 911 Turbo. A lot of 30- or 40-year-olds will be trading in their Ferraris for this car.”

At least one other Porsche owner felt the same. “It just makes me feel good driving it,” Shari Staglin gushed. “It was certainly worth getting my hair messed up for. I was more comfortable in that car than in any other, and so I was able to drive faster.”

The Continental GTC might be the only four-passenger car that can match the performance and charm of Italian sports cars and convert their devotees—especially the ones who want a car that includes room for friends.

With its twin-turbocharged, 6-liter W-12 engine that is good for 552 hp, the GTC will hit 60 mph in 4.8 seconds and achieve a full speed that is just shy of 200 mph. And the car makes only minimal performance concessions—structural reinforcements add about 200 pounds of mass—in the interest of open-air motoring.

Bentley did not simply chop the top off the Continental GT and call it a day. The GTC appears unique and equally attractive when compared to its coupe and sedan siblings. As Bill Harlan noted, “The design is clean, pure, and well executed. It finishes the set: a great coupe, great sedan, and great convertible for the discriminating driver.” Adding historical perspective, he added: “I don’t think anyone else has come close to what Bentley has [accomplished] in the 21st century.”

Those who already have placed their orders for this low-production car can thank us for initially downplaying the car’s introduction; the wait for delivery might not be too long. As for other would-be GTC owners, alas, our secret is officially out.