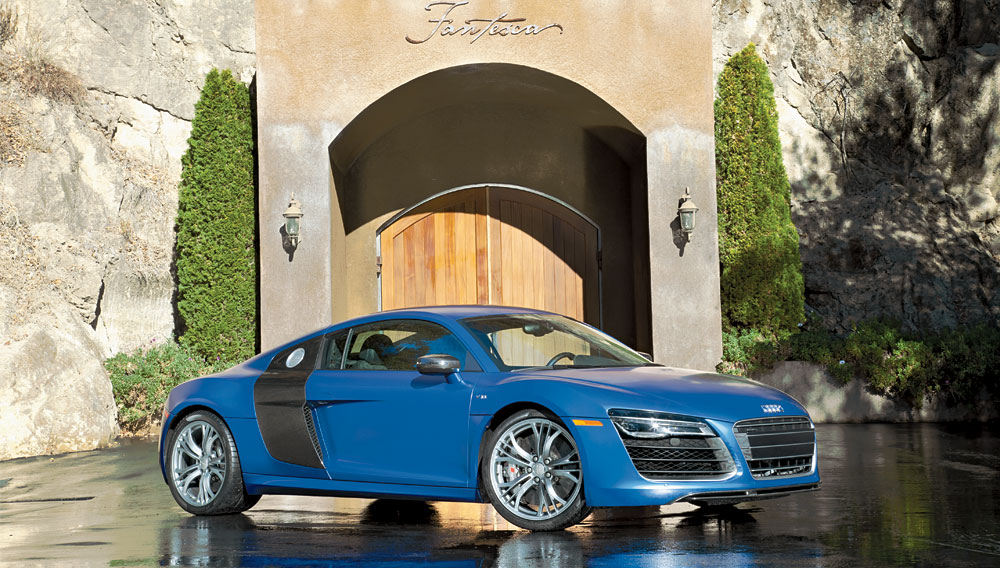 The R8, in various variants, has competed in four of the last seven Car of the Year events and finished second each of the last three times after claiming victory at its Napa Valley debut in 2008. Evidently our judges find something magical about the combination of a fiery, Lamborghini-derived V-10 engine and Teutonic practicality, engineering, and aesthetics. This year, the judges took particular note of the V10 Plus’s all-new dual-clutch transmission, praising it as a vast improvement over the outgoing R tronic gearbox.

Though it has been around since 2007, the R8 continues to lead the pack of mid-engine sports cars—or at least finish in the top two.  —Paul Meyers

The perky and powerful R8 was among the first of the super road cars. It was introduced in 2007 and is beginning to show some gray around its side strakes. To the delight of R8 disciples, changes to the model over the years have been mostly minor and gently progressive. For 2014, the R8 received a visual refreshing—light revisions to the grille, badging, rearview mirrors, and wheels—and several more serious updates. These include a new 7-speed, dual-clutch transmission, improved mechanicals that produce a smoother ride, and many body parts made of aluminum. The V10 Plus’s engine is lighter, and the horsepower has been increased to 550.

Despite its polarizing appearance, the R8 V10 Plus was a popular second choice among our judges. Indeed, about a dozen judges planned to buy one. The widespread opinion was that the car did just about everything perfectly.

Audi makes very good cars—it seems incapable of making a bad one—but the R8 V10 Plus is stellar. It is a well-rounded sports car that rivals the Porsche 911 in its ability to deliver the goods without fanfare or idiosyncrasy. The R8 shape is now familiar, and so the V10 Plus may not vie for the parking spot that the valet has reserved for the newest and most exclusive model. Nevertheless, the car will impress drivers with its flawless performance and impeccable engineering and build quality.  —Robert Ross