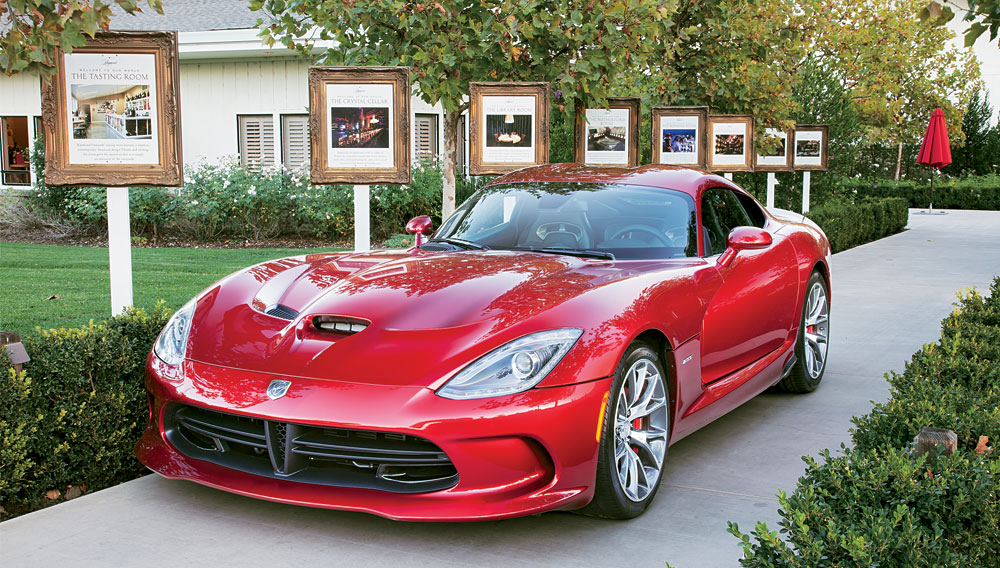 The fifth-generation Viper, the flagship of Chrysler’s Street & Racing Technology (SRT) division, represents three years of reengineering by Ralph Gilles and his team to create a track tyrant that looks as though it was styled in a wind tunnel. As our judges discovered, even in its more refined GTS form, the Viper is indeed a single-purpose automobile built for racing circuits, not wine-country roads. “Driving this car is like wrestling alligators,” said one judge, whose herpetological inclinations stopped with a pair of stylish alligator driving shoes. Others were equally flummoxed. “It was fun,” said another judge, “for the first two minutes.”

The Viper has always been the hair shirt of sports cars. It never has been equipped with an automatic transmission, and the current model does not have ABS brakes. It does have cup holders—for the first time—but there is not a surface anywhere in the interior that can accommodate a smart phone. Despite the absence of amenities, the Viper GTS can be priced at more than $150,000, as was the one driven at the Car of the Year contest. No new American-made production car costs as much.

The 8.4-liter V-10 monster beneath the Viper’s curvaceous carbon-fiber hood is normally aspirated and develops 640 hp and 600 ft lbs of torque. It is paired with a Tremec 6-speed manual transmission, for drivers who enjoy shifting gears the old-fashioned way. There are Sport and Track settings for the stability-control system but not much else to assist with the drive from Point A to Point B. The Viper requires a lot from its driver, but when it is traveling from Point A to Point A around a racetrack, its shortcomings become virtues and, like the Car of the Year test vehicle’s Adrenaline Red paint job, it really shines.