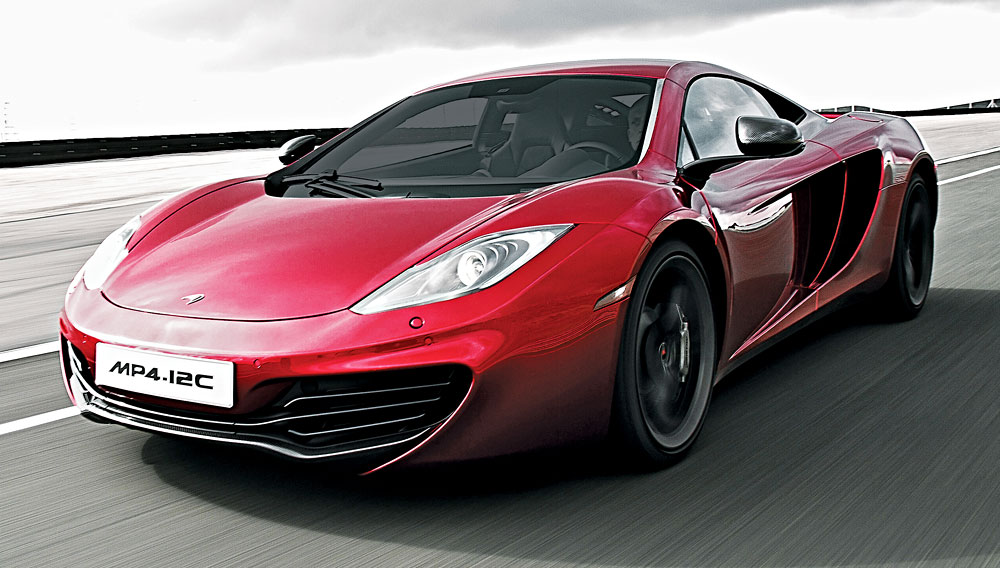 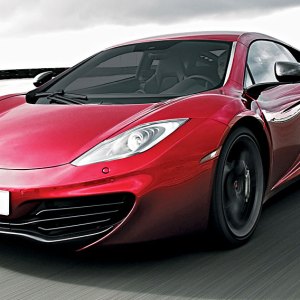 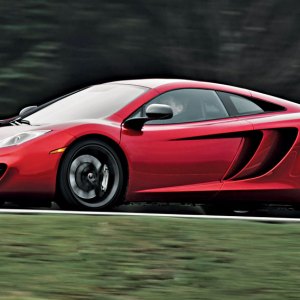 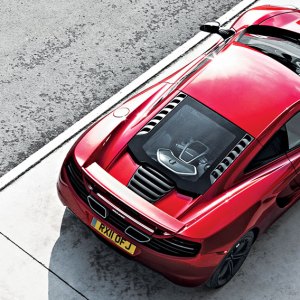 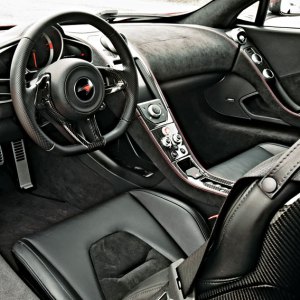 McLaren Automotive’s launch this year of the MP4-12C is a laudable achievement. Not since Lamborghini in the 1960s has a super-performance marque emerged with a car in which every major component is unique to the brand. Engine-development cost is the Achilles’ heel of most automotive start-ups, and so high-end newcomers rarely if ever see fit to invest resources in the creation of a purebred sports car. But the MP4-12C, the first volume-production model from the road-car-making sibling of McLaren Racing, features an engine that is entirely its own.

While McLaren Automotive’s first car, the low-volume and legendary McLaren F1, utilized a bespoke BMW V-12 engine, a McLaren-designed V-8 powers the 12C. The M838T engine is a 3.8-liter, 90-degree, 32-valve DOHC V-8 with twin turbochargers that develops 592 hp and 443 ft lbs of maximum torque. This 439-pound aluminum jewel uses dry-sump lubrication, which reduces its weight and lowers its center of gravity. Longitudinally mid-mounted behind the passenger compartment, the powerplant takes the 2,868-pound (with lightweight options) 12C to a top speed of 205 mph and from zero to 60 mph in three seconds (when the car is equipped with the optional Pirelli PZero Corsa tires; 3.2 seconds with the standard Pirelli PZeros).

But it is not just the engine of the $229,000 12C, which will begin arriving in the United States in October, that impresses technophiles and performance-oriented drivers. McLaren’s history demonstrates proof of the concept that carbon—not plastics, as proclaimed in The Graduate—is the key to success. Since 1981, neither McLaren Racing nor McLaren Automotive (which was formed in 1989 as McLaren Cars and became an independent company in 2009) has built a car with anything but a carbon chassis. The 240 mph F1, of which the company built only 106 examples from 1992 to 1998, was the world’s first carbon-based road car, and the Mercedes-Benz SLR—made at the McLaren factory—is the world’s most popular carbon-based car thus far. Composite technology is the backbone, literally, of the new-generation McLaren automobiles, and the company is set to prove that carbon fiber can be a cost-effective platform on which to base an entire range of volume-production road cars.

In Formula 1, McLaren Racing has achieved dominance since New Zealand native and grand prix racer Bruce McLaren established it. The company began manufacturing in 1964 and has since made history with 171 grand prix victories, 12 World Drivers’ Championships, and eight World Constructors’ Championships, with drivers such as Lauda, Prost, Senna, and Lewis piloting its cars.

Ron Dennis, chairman and CEO of the McLaren Group, which includes both the auto manufacturer and the racing team, puts his company’s success in context. “One hundred and seven F1 teams have come and gone since 1966,” he notes. “Survival is challenging.” It is no less challenging in the sports-car realm, where McLaren has applied its racing technology—underpinned by the most advanced composite engineering resources in the business—to create the MP4-12C.

A visit to McLaren Technology Centre in Woking, England, less than an hour’s drive outside London proper, reveals Dennis’ obsessive, perfectionistic nature. He has stipulated that nearly everything inside the sprawling facility be painted the same hue of white—from forklifts to cabinetry to hundreds of thousands of spotless ceramic floor tiles. The continuity is intended to promote total harmony, even tranquility, in the creative process.

According to Dennis, after building 1,000 cars this year, McLaren Automotive plans to produce 4,000 examples of the 12C annually by the middle of the decade, in its new, nearly 350,000-square-foot facility adjacent to the Technology Centre. This activity might be of interest to Ferrari, which recently released the 458 Italia, a car that bears a physical resemblance to the 12C and has comparable performance capabilities.

With gracious deference, Dennis insists that Ferrari is not a competitor. He acknowledges that potential customers for his car are the same people who drive the world’s other great sports cars, but that even in such a rarefied field, there is room for McLaren, as the company has demonstrated by already selling out its first year’s entire production. After careful inspection and a first drive, it is hard to imagine that any performance-car aficionado will not clamor for his or her own 12C.

Achieving maximum performance with maximum efficiency is of paramount concern, and according to McLaren Automotive managing director Antony Sheriff, the 12C “is the most powerful car in its class, yet with a CO2 figure of just 279 g/km, each horsepower is produced more efficiently than virtually any car on sale today featuring a petrol, diesel, or hybrid engine.”

Because its designers intend for the 12C to be a practical road car, its exhaust note is refined and almost Porsche-quiet compared with the commotion created by its Italian counterparts. An optional lightweight sport exhaust made of Inconel sets the bar for exotic metallurgy and provides a more aggressive note for those who wish to announce themselves.

A dual-clutch, 7-speed transmission is flicked through fingertip controls behind the 12C’s tidy steering wheel. The mechanical sound that accompanies the gear changes will bring drivers a step closer to realizing their Formula 1 dreams. The gearbox can be set to Normal, Sport, or Track mode, and the differences between the settings are immediately apparent when driving on a track and even on the road. The transmission also has Automatic and Winter modes, as well as Launch Control for exhibitionists and parking valets.

Need more fiber in your diet? Try a flyweight, 165-pound carbon MonoCell tub, the nucleus around which the 12C is built. Other than the 12C, the only series production car (with projected volumes into the thousands) employing a composite chassis is the Lamborghini Aventador, which has a more comprehensive and costly carbon cage. Front and rear aluminum subframes are attached to the chassis, carrying race-derived suspension at both ends.

What McLaren calls ProActive Chassis Control is a suspension system based on double wishbones with coil springs. It utilizes hydraulic dampers but eschews traditional roll bars, which would improve handling but also increase ride stiffness. Instead, the 12C offers driver-adjustable roll control that establishes precise cornering but essentially decouples the suspension in straight-line driving. Again, the driver chooses Normal, Sport, or Track settings—completely independent from those of the transmission mapping—to render a ride with the supple comfort of a luxury sedan. The system rewards the sporting driver who seeks more than a modicum of comfort and the surgical precision of a track car.

For McLaren, safety and speed go hand in hand, so the 12C includes an electronic driver aid called Brake Steer. A variation on the torque-vectoring differential developed for Formula 1—and subsequently banned for its efficacy—to prevent wheel spin and improve traction, Brake Steer essentially reduces understeer. Take a corner too hot and the system applies braking forces to the inside rear wheel, bringing the nose back in line. In doing so, it also improves acceleration out of corners.

When deceleration is in order, the standard cast-iron brakes on the McLaren are sufficient for all but the most aggressive track work. But ceramic composite brakes are an option for owners who must have bragging rights to the largest, lightest rotors.

To aid braking and improve aerodynamic downforce, the McLaren employs an aggressive air brake, which, under heavy breaking at speeds faster than 60 mph, shoots up and articulates to the correct angle. The broad wing, ordinarily flush with the rear deck, creates an impressive display worthy of an avian exhibitionist, fanning and flapping when performance is called for and quickly disappearing once the job is done.

The man behind the look of the 12C is Frank Stephenson, formerly with Ferrari and responsible for the F430. Stephenson is a designer’s designer, with a practical side reflected in styling that is at the service of the greater good: an economy of lines and weight, maximum visibility, and aerodynamic efficiency.

The 12C’s dihedral doors—the signature of the McLaren F1—swoop up and out, a pragmatic solution for creating space and saving weight. The front cowl and huge windscreen arc downward in a graceful curve that provides an expansive vista from behind the wheel. Exterior louvers, vents, and side air inlets keep the car glued to the road while cooling the drivetrain systems; louvers along the engine cover extract heat from the busy engine bay.

Inside, all is calm. The cockpit is purposeful and comfortable, with a narrow center console that offers just two rotary controls (for the transmission and suspension settings) and four buttons. It is blessedly simple, in contrast to the confusing command centers containing a plethora of nonsense that so effectively date-stamps a design. The console also houses the Active Dynamics Panel, a vertical screen for the navigation system and the Meridian entertainment system.

Ultimately, the greatest pleasure afforded by the McLaren MP4-12C is in the driving. Lightning-fast paddle shifts are clicked off as quickly as revs build. While good torque is abundant at lower rpms, the engine spins to a sublime redline with an accompanying soundtrack that is distinct to the McLaren V-8, which, despite twin turbochargers, delivers power seamlessly.

Steering is precise, with telegraphic feedback that is neither light nor twitchy. McLaren Brake Steer neutralizes handling and essentially nullifies understeer, making the 12C a friendly car for non-world-class drivers. Automatic shifting mode, a welcome option for real-world freeway driving, acquits itself on the track by allowing the driver to concentrate completely on the course instead of worrying about optimal shifting points. The McLaren is an easy car to drive fast.

The 12C inevitably will be compared to the Ferrari 458 Italia in appearance, technology, performance, and pedigree. But anyone who appreciates excellence realizes that the sports-car world is bettered by the presence of McLaren. And we suspect that both marques will be parked side by side in many garages.