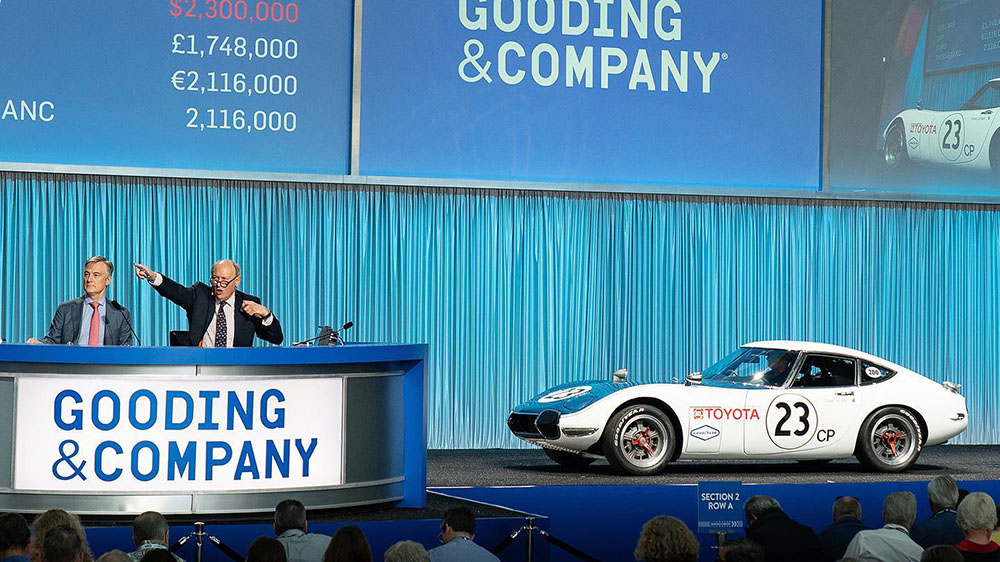 It shouldn’t come as a surprise that a 2000 GT now owns the title. The Satoru Nozaki-designed coupé debuted during a time when the country’s cars were unfairly derided as little more than disposable budget rides, but it’s one of the more striking sports cars of the era. Low and compact, the car has a long nose and sleek curves running from front to back. Only 351 examples were built, each of which were meant to show that Japanese vehicles were more than just utilitarian everyday drivers, a goal they accomplished with ease.

Toyota’s exclusive coupé wasn’t just a looker, though. It also had some pep thanks to a Yamaha-built 2.0-liter, twin-cam inline-six engine that produced a respectable 148 hp and could push the car to a top speed of a 137 mph, both of which were impressive marks for the times. Of course, this isn’t any old 2000 GT. This particular example, chassis No. MF10-10001, is the first of three which Toyota had Shelby modified for competition in SCCA C-Production racing. This included tuning the engine, lowering its suspension, stripping its Solar Red finish and replacing it with a racing livery.

This 2000 GT’s auction price easily tops the previous record for a Japanese car. In 2019, the first production example of the fifth-generation Supra sold for $2.1 million, with all proceeds going to the American Heart Association and the Bob Woodruff Foundation, according to the ClassicCars.com. In terms of vehicles not sold for charity, the previous record holder was a 1989 Mazda 767B race car that sold for $1.75 million in 2017. Amazingly, this particularly 2000 GT went for lower than its pre-sale estimate of between $2.75 million and $3.5 million.

The interior of the Shelby-tuned 2000 GT  Photo by Josh Hway, courtesy of Gooding & Company.

The result shows that collectors are starting to take Japanese-made sports cars more seriously. That is undoubtedly a good thing, but there is still room for improvement. The Shelby-tuned 2000 GT was the fourth highest sale of the event, finishing behind a 1937 Talbot-Lago T150-C-SS Teardrop coupé (that sold for $13.43 million), a 1959 Porsche 718 RSK ($2.98 million) and a 1954 Bentley R-Type Continental Fastback ($2.98 million).