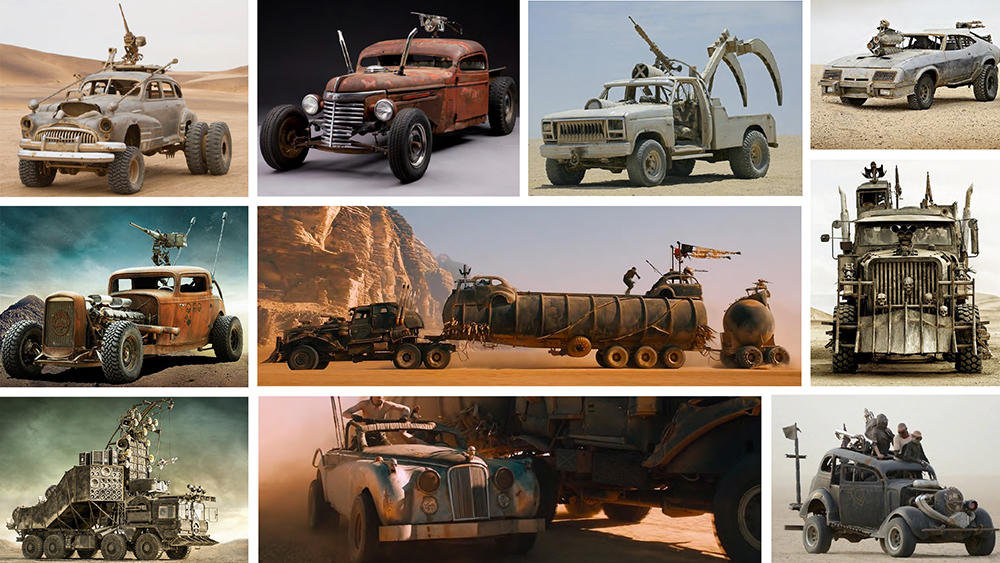 Let’s face it, the real stars of George Miller’s post-apocalyptic hit Mad Max: Fury Road were the gas-guzzlers. The 2015 blockbuster features a full fleet of insane, high-octane machines, and now they are ready and raring to join your collection.

Lloyds Auctioneers and Valuers is sending some of the film’s most memorable rides under the gavel for the first time this September. The 13 otherworldly cars and trucks, which will be offered separately, were created by head production designer and art director Colin Gibson and painstakingly custom-built for the big screen.

Leading the charge is the War Rig. A cross between a semi-trailer and hot rod, this 18-wheeler boasts two V-8s end-to-end and a bunch of weapons (in the movie at least). The truck is most famously helmed by the formidable warrior Furiosa (Charlize Theron) during the high-speed chase across the desert wasteland.

Another highlight is the Gigahorse, which is piloted by the fearsome main antagonist Immortan Joe (Hugh Keays-Byrne) throughout the movie. This hair-raising beast is actually two ‘59 Cadillac Coupe de Villes stacked on top of one another. Again, it’s packed with not one but two V-8 engines mated to a handmade gearbox and rides on massive wheels. The monster truck is shown equipped with a harpoon and flamethrower for the battles on Fury Road.

One more vehicle that is impossible to ignore is the Doof Wagon. It’s actually a repurposed 8×8 missile carrier that sports a ginormous stack of speakers to blast the music for end times. You might remember Coma (Sean Hape), the terrifying Doof Warrior, rocking out on the top of the behemoth with a flame-throwing guitar.

Other noteworthy four-wheelers include Nux’s super-turbocharged, nitrous-boosted 1932 Chevy Deuce Coupe which Max (Tom Hardy) gets strapped to the front of; a flame-throwing Dodge hot rod known as the Fire Car; and a repurposed F250 tow truck with a vicious pair of steel teeth dubbed Saber Tooth. (You can check out the full list here.)

“These vehicles are iconic and need to be seen and enjoyed… and driven in anger every so often,” COO Lee Hames told Robb Report.

The explosive vehicles will be offered in a series of virtual auctions from September 25-26. There are no prices currently listed on the site, but we imagine road warriors will be prepared to drop some serious cash.