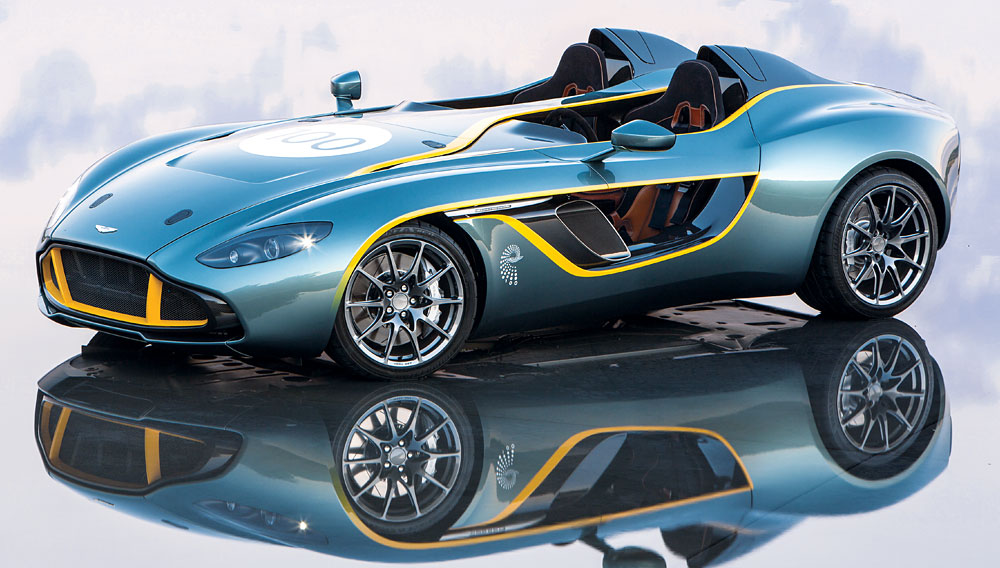 The Aston Martin name is not quite 100, but the British company that builds the cars was originally formed in 1913, and so Aston Martin has spent the past year celebrating its centennial. The events included the debut of the CC100 Speedster Concept (shown on the previous pages), a one-off design made mostly of carbon fiber that visually recalls the DBR1 racecar. The company introduced the Speedster in May at the Nürburgring, prior to the 24-hour race. It was an appropriate setting for the debut, because in 1959, the DBR1 became Aston Martin’s most successful racecar by winning on that circuit and at Le Mans.

The ceremonies continued into July, when, at Kensington Gardens in London, the company hosted the Centenary Celebration, which featured a display of about 150 Aston Martins. The cars ranged from the earliest to the latest models and included one-off concepts, racecars, and of course the vehicles that have appeared in the James Bond films. On these pages, we focus on 10 of the most significant Aston Martins from that gathering and from the company’s 100-year history.

As for the name, Aston Martin officially first appeared 98 years ago, when the Bamford & Martin company registered it to a 50 mph sports car made from a 4-cylinder Coventry-Simplex engine and a 1908 Isotta Fraschini chassis. The company itself did not take the name Aston Martin until 1925. So maybe a second centennial celebration is in order for the year 2025.

The oldest known surviving Aston Martin is the A3, which was built in 1921 by Robert Bamford and Lionel Martin. The numeral 3 may indicate that the car was the third Aston Martin ever built. The two Britons had formed the Bamford & Martin company in 1913 in London, initially to sell and service Singer motorcars. Martin, a motorsport enthusiast, adapted some Singers to compete in hill climbs, the uphill races that were popular at the time. In 1915, when Bamford and Martin built their own car—the aforementioned vehicle that paired a Coventry-Simplex engine with an Isotta Fraschini chassis—they called it an Aston Martin, in honor of Martin’s successes in the contests at Aston Hill in the English county of Buckinghamshire. The A3 arrived six years later, after World War I had prevented development and production of that earlier model, and after Bamford had left the company. Powered by a 1.5-liter 4-

cylinder engine and sporting a polished aluminum hood, the A3 debuted at the Kop Hill Climb in Buckinghamshire. It also served as a backup to the two Aston Martins that competed in the 1922 French Grand Prix.

Cut to the Quick

A single-seat racer built in 1923, the Razor Bladegot its name from its body, which was built—by the De Havilland Aircraft Co.—just 18.5 inches wide to make the vehicle as aerodynamic as possible. The car originally was called the Oyster, because it had a hinged cockpit cover. But when the top was later discarded, the Razor Blade name stuck.

The Razor Blade won the first race in which it competed, at Brooklands in 1923. Bamford & Martin also employed the Razor Blade in an attempt to break the one-hour speed record set by fellow British automaker AC Cars. Though the Razor Blade consistently lapped the Brooklands circuit at 103 to 104 mph, which would have been fast enough to set a new record, the company abandoned the attempt because the car kept shredding its tires.

In 1926, August “Bert” Bertelli and William Renwick took over Aston Martin Motors, which had been in bankruptcy. Bertelli designed the cars, his brother Enrico built the bodies, Renwick engineered a new 1.5-liter 4-cylinder engine, and Aston Martin went racing. To celebrate its winning the team prize at the Tourist Trophy races held in Ulster, Ireland, in 1934, Aston Martin introduced a limited-run Ulster model based on the racecars. The Ulster was equipped with an 80 hp engine and could reach speeds in excess of 100 mph. Aston Martin built only 21 examples, 17 with two-seat racing bodywork and four with seating for four. All of the cars still exist.

After the Racers Split

By 1939, Bertelli and Renwick had left Aston Martin, and the company—now owned by the shipping magnate Sir Arthur Sutherland and run by his son Robert—had shifted its focus from racing to road cars. That year, chief engineer Claude Hill developed the Atom, an aerodynamic sedan prototype that featured a steel space frame, an independent front suspension, and body panels made of a lightweight magnesium alloy called Elektron. The car’s space-frame construction provided the basis for the DB1 and succeeding models. David Brown responded to a classified ad in the British newspaper The Times announcing that a motorcar company was for sale. That company turned out to be Aston Martin, and after driving the Atom in 1947, Brown, who owned a successful engineering business at the time, agreed to buy the company. He remained in charge of Aston Martin until 1972 and lent his initials to the DB model names.

Following the introduction of the two-seat DB2, Aston Martin expanded the range by offering a 2+2 version of the car, the DB2/4. Its rear seats folded down to offer additional luggage space, which was accessed through a rear hatch. The 2+2 hatchback configuration, known in England as a shooting brake, continues to this day on the DB9 and Vanquish. Introduced in 1953, the DB2/4 was one of the fastest GT cars of its day. Its 125 hp 2.6-liter twin-cam straight-6 enabled a top speed of 120 mph. David Brown obtained the engine when he acquired the English automaker Lagonda, shortly after he bought Aston Martin.

The DB5 became a pop-culture phenomenon when it appeared in the 1964 James Bond film Goldfinger, a year after the car went into production. But the DB5 is also significant because, like the DB4 and DB6, it featured the Superleggera (Italian for “superlight”) construction patented by Italy’s Carrozzeria Touring. This design uses steel tubes to support the car’s aluminum bodywork. The DB5 also was the first Aston Martin road car equipped with a 4-liter version of Tadek Marek’s twin-cam straight-6, which powered the four-door Lagonda Rapide and the DP215 racecar. With this engine, the DB5 was capable of reaching 150 mph.

When the V8 Vantage debuted in 1977, it was the world’s fastest production road car, and now it is regarded as Britain’s first supercar. The V8 Vantage had a 380 hp engine, which gave it a top speed of 170 mph and a zero-to-60-mph time of 5.3 seconds, even though the car weighed about 4,000 pounds. Such high speeds necessitated a deep air dam, a full-length ducktail spoiler across the car’s rear, and other aerodynamic enhancements.

Canine that Could Fly

Project K.901, or K-9 for short, was intended to demonstrate the capabilities of Aston Martin’s new engineering facility in Newport Pagnell. K-9 eventually became a one-off mid-engine supercar called the Bulldog, named for the Scottish Aviation Bulldog airplane flown by Aston Martin’s managing director at the time, Alan Curtis. The Bulldog was designed by William Towns, who also penned the edgy Lagonda sedan that Aston Martin built from 1976 through 1990. The two-seater was more than 15 feet long and only 43 inches tall. It was equipped with massive electrohydraulic gullwing doors and hideaway headlamps. The Bulldog’s twin-turbo 5.3-liter V-8 produced more than 700 hp and enabled a top speed that was estimated at 237 mph. In test-drives, however, the highest speed recorded was 192 mph.

In 1987, Ford Motor Co. acquired a share of Aston Martin, and then two years later it bought Jaguar. When Ford stopped making the Jaguar XJ220 supercar in 1994, it created the capacity at the production facility in Bloxham for an all-new Aston Martin, one that borrowed elements from the Jaguar XJ-S and was more affordable than other Aston Martins. Walter Hayes, a top Ford executive who ran Aston Martin at the time, invited former Aston Martin owner David Brown to view a clay model of the car, which was being developed under the name Project NPX. Brown reportedly was so delighted with the model that he said, “You must call it a DB7.” The DB7, powered by a new 3.4-liter inline-6 engine, was introduced at the 1993 Geneva Motor Show and went into production a year later. Aston Martin debuted the DB7 as a coupe, then added a convertible model, and eventually offered V-12-powered versions of the car.

One for the Ages

Introduced in 2009, the One-77 fits the definition of a hypercar, a term that was introduced in recent years when supercar no longer seemed sufficient. The vehicle has a 7.3-liter V-12 that produces more than 750 hp and enables a top speed exceeding 220 mph. Aston Martin planned to build 77 examples of the $1.85 million car, and unlike with the Bulldog, it achieved its goal. The interior looks like that of a grand tourer, but the carbon-fiber body, the pushrod suspension, and the menacing exhaust note speak to Aston Martin’s racing heritage. This blend of high style and extreme performance makes the One-77 perhaps the purest expression of the Aston Martin marque.