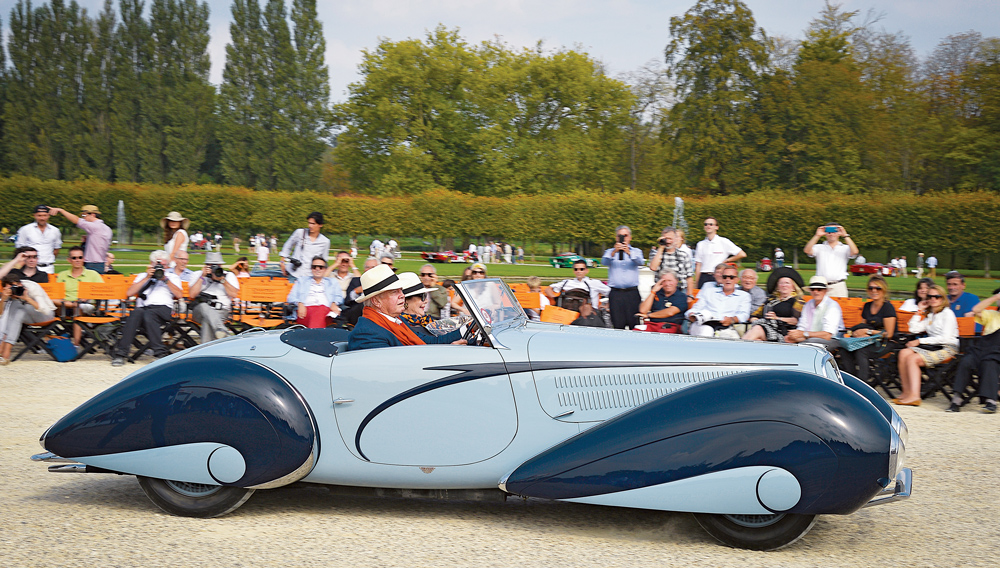 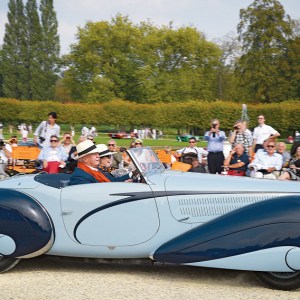 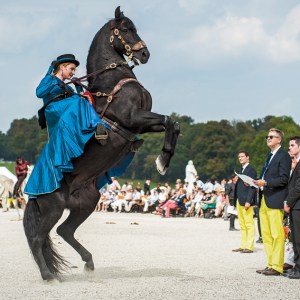 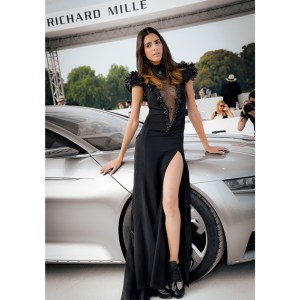 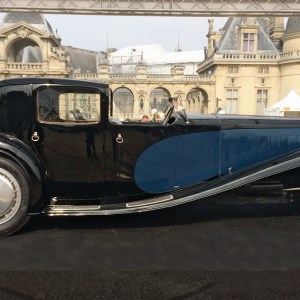 Lying less than an hour’s drive north of Paris, the quaint town of Chantilly (pronounced “shawn-tee-YEE” in French) affords a blessed respite from France’s alluring but chaotic capital. The town, once known for the types of porcelain and lace that were made there, is home to the Domaine de Chantilly, a property that dates to at least the 13th century and includes a castle of grand proportions, the Château de Chantilly. The castle houses the Condé Museumand its collection of more than 800 important paintings, 44,000 ancient books, and 1,500 manuscripts. The estate’s grounds also feature a garden and a 1.5-mile Grand Canal designed in the 17th century by André Le Nôtre, who at the same time was creating the gardens of Versailles for King Louis XIV.

On the first weekend of September, visitors to the Domaine de Chantilly were greeted by one of the greatest treasures of the automotive world: the 1930 Bugatti Type 41 Coupé Napoleon, the first of the six Royales that Bugatti built. On loan from the Collection Schlumpf at the Cité de l’Automobile, Museé National in Mulhouse, France, the 21-foot-long leviathan sat atop a platform at the entry to the estate. On the field beyond was a collection of A-list automobiles ranging from models built at the dawn of the industry to prewar classics, postwar sports prototypes, historic racecars, and contemporary concept cars. Each was a contestant in one of the three concours competitions that composed the inaugural Chantilly Arts & Elegance Richard Mille, an event that drew some 10,000 visitors and will likely attract even more to its second edition, scheduled for September 6, 2015.

The presence of the Bugatti immediately signified to all visitors the clout of the event’s organizers: Richard Mille, the founder of his namesake watch brand and an avid auto collector, and Patrick Peter, of Peter Auto, which operates the Le Mans Classic and other vintage-racing and classic-car events. On the evening prior to Sunday’s competitions, Mille and Peter hosted a formal dinner for nearly 500 invited guests at the estate’s Great Stables, in the nave—the banquet hall where the Condé family held parties when they owned the estate in the 18th century.

An architectural masterpiece, the stables were also home to the Condé family’s horses and today house a museum of equine history. According to legend, Louis Henri, the prince of Condé, believed he would be reincarnated as a horse, and so in the 1700s he commissioned stables that would provide him with comfortable accommodations in his next life. The centerpiece of the stables is an elegant stadium whose oval ring served as the stage for a performance that preceded the banquet. A troupe of riders dressed in brilliant period costumes and their mounts executed meticulous equine choreography to music that ranged from a Brandenburg Concerto to cool midcentury jazz.

Dinner was a black-tie affair that began with the introduction of the hosts, Mille and Peter, followed by a procession of waiters serving the evening’s wine. Accompanied by a light show and music, the waiters presented the wine in a succession of formats that began with a single 750 mL bottle and progressed to an 18-liter Melchior. Dinner included a soufflé that seemed, although the three Michelin-starred chefs were cooking for 500, to have come from a single casserole.

Sunday afternoon’s lunch featured similar displays of culinary expertise and a variety of Bordeaux in huge formats. A string quartet played while Mille’s guests dined. Lunch concluded with the arrival of a gigantic Thoroughbred. Its rider guided the steed forward and backward, up and down the center aisle between the tables. The horse reared, then delicately threaded through the crowd and trotted off to a fanfare of applause.

Notwithstanding the Domaine de Chantilly’s architecture, art, and gardens, and the weekend’s food, wine, and equestrian shows, the focal point of Arts & Elegance was the cars. In the event’s Concours d’Etat, 100 of the world’s most beautiful automobiles competed in 10 classes. Two of the classes were dedicated to the Maserati marque, which celebrated its centenary in 2014. Other classes included French cars from the 1920s and ’30s with coach-built bodies, Bugattis, interwar sports and racing cars, and British and Italian classic sports cars.

The Lamborghini Flying Star II was among a handful of unique concept cars from the 1960s and ’70s in the competition. The one-off design was the swan song of Carrozzeria Touring, the Milanese coachbuilder that went bankrupt and closed its doors in 1967. Built on the chassis of a Lamborghini 400 GT 2+2, the Flying Star II was Touring’s elegant take on a Lamborghini estate wagon, or shooting brake.

Judges for the Arts & Elegance concours competitions included Frank Stephenson, who designed the Mini and the Ferrari F430 and is currently the design director for McLaren Automotive; the renowned collector Bruce Meyer; the former racer and current television-program host Alain de Cadenet; Gordon Murray, who designed the McLaren F1 and the Mercedes-Benz SLR McLaren; and Adolfo Orsi Jr., a Maserati expert whose family owned the marque from 1937 to 1968. The judges awarded the best-of-show prize to Peter and Merle Mullin’s 1937 Delahaye 135M Cabriolet with coachwork by Figoni et Falaschi.

Less a competition than a showcase, the Chantilly event’s Concours d’Elegance recalled the French concours of the 1920s and ’30s, at which coachbuilders presented their latest designs. The concours featured the world premiere of Zagato’s Aston Martin Virage Shooting Brake, a long-legged, two-door hatchback that displays the typical quirkiness and flair of a Zagato creation. Also drawing attention was the Maserati Alfieri, an in-house design prefiguring the successor to the brand’s GranTurismo sports car.

The third judged event, the Grand Prix des Clubs, involved some 500 vehicles representing about 20 car clubs from around the world. The competition’s “Lunch on the Grass” theme called for each car to be presented with the owner’s take on a luxury picnic. Wicker baskets, fine linen, and candelabra were arrayed among the ACs and Aston Martins, Alfa Romeos and Alvises, Delages and Delahayes. Even the Mustang Club de France was represented, with a display of Ford’s popular pony cars that included a meticulously restored 1964½ notchback coupe in Wimbledon White.

With the annual affairs at Monterey, Villa d’Este, and Goodwood setting the bar, any newcomer to the international concours scene is scrutinized as seriously as the cars themselves. The Chantilly event certainly faced such judgment, and the verdict is in: Based on the invited guests’ seemingly unanimous praise, Richard Mille’s concours has eclipsed every other one.

Other concours may satiate the enthusiast’s automotive appetite, but they lack the space offered by Arts & Elegance. Though nearly 10,000 people attended Sunday’s event, the crowd was never pressing; there was not the constant concern of backing into a cell-phone camera while trying to enjoy a broader view of a car.

Other concours also lack the cultural elements found at the Richard Mille event. To take a break from looking at automobiles, visitors could, for instance, spend time viewing a special exhibit of Fra Angelico and Sandro Botticelli paintings in the Condé Museum’s Jeu de Paume room. Other diversions included a variety of gastronomic and oenological demonstrations, regattas of classic wooden boats and vintage skiffs on the Grand Canal, and workshops for making everything from hats to crème Chantilly, better known as whipped cream. (Whipped cream may have been served at the estate as early as the 17th century, but contrary to some accounts, it was not invented there.)

With its over-the-top debut, the Chantilly Arts & Elegance Richard Mille has redefined the confluence of automobiles and culture, and in doing so it has not just met the bar for concours events—it has raised it.