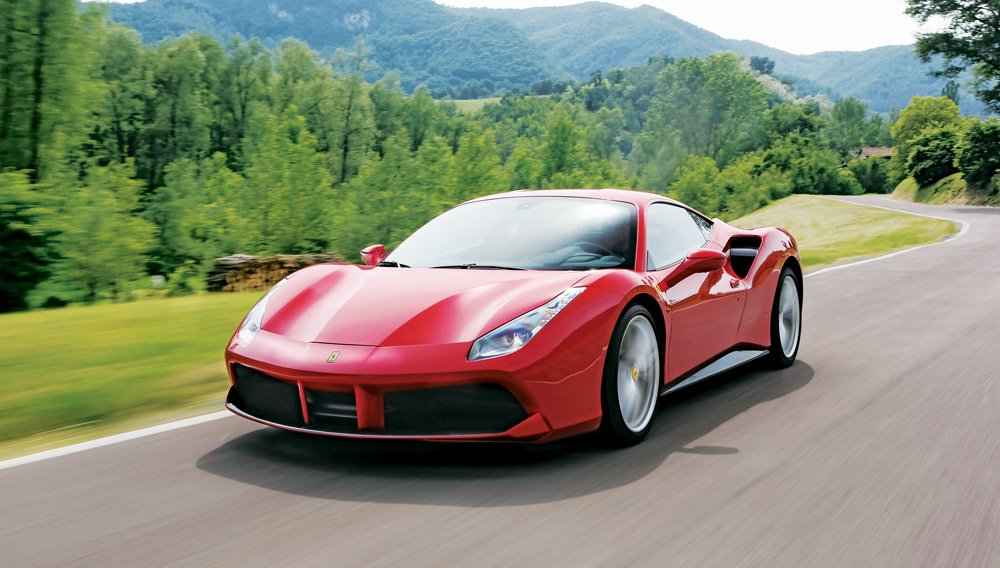 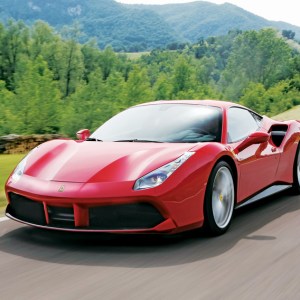 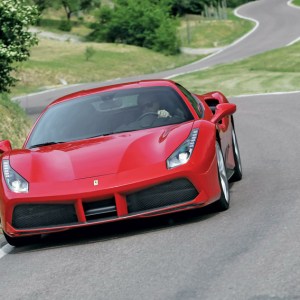 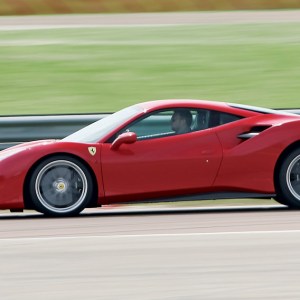 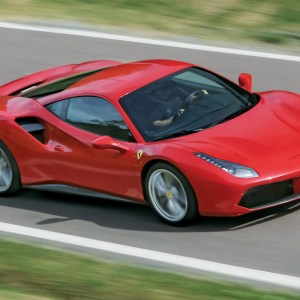 Driving the new Ferrari 488 GTB on the company’s test track and through the countryside outside Maranello shows there is no turning back from the car’s turbo-enhanced V-8.

The bridge at Fiorano, Ferrari’s 1.9-mile test track near Maranello, Italy, will reveal a car’s character. The figure-eight circuit rises to a crest, dips, and rises again at the bridge, which spans the crossover point. Before this second crest, you ease into the brakes to keep the car’s nose down, then press hard on the pedal before entering a 90-degree right-hander. If the car has any flaws, they will manifest here.

The new Ferrari 488 GTB, which is equipped with the latest adaptive suspension technology, was unflappable on this and every other section of the track. It also remained composed on the highways that run through the verdant countryside outside Maranello, where, on this early-June day, the air was redolent of honeysuckle and the first cuttings of hay were drying in the fields.

Powered by a new twin-turbocharged engine—which, after the California T’s launch last year, makes it only the second turbocharged Ferrari road car since the F40 of the late 1980s—the 488 GTB proved worthy of replacing the 458 series and extending Ferrari’s tradition of building brilliant mid-engine V-8 berlinettas—the name the marque has used since the 1950s for its sport coupes. The 488 GTB, which officially debuted in March at the Geneva International Motor Show, is priced at about $245,000. Deliveries are expected to begin by the end of October. (Like the original Ferraris and its immediate predecessor, the 488 GTB takes the numerical portion of its name from the quotient of the engine’s displacement—3,902 cc—divided by the number of cylinders.)

Ferrari introduced the first GTB model, the 308, in 1975 (along with the 308 GTS spider), and with it came an onslaught of V-8 power. Since then the company has been producing ever more sophisticated and potent grand-tourer berlinettas and spiders, leading to the 488 GTB. (A spider version is expected to arrive next year.) “We wanted top of the segment in terms of acceleration,” said Ferrari’s development director, Matteo Turconi, during the test-drive event in Maranello. “We worked on developing the aerodynamics and chassis dynamics to put all this power on the ground in a safe way, in an emotional way.”

The new GTB’s engine uses direct fuel injection—in addition to turbochargers and intercoolers—to generate 661 hp and 561 ft lbs of torque. Compared to the 458 Speciale’s larger, normally aspirated 4.5-liter V-8, these figures represent a 16 percent increase in horsepower and a 41 percent jump in torque. The engine is paired with a 7-speed dual-clutch transmission, which automatically downshifted through the gears and settled into second at the point where Fiorano’s longest straightaway ends. The power train enables a blinding 3-second dash from zero to 62 mph, and in only 8.3 seconds the car reaches 124 mph.

Ferrari engineers focused on speed and sound. They labored to tune the 488 GTB’s exhaust note without resorting to the use of a sound synthesizer. As heard on the track, the note was raw and threatening; the hoarseness was typical of engines, like this one, with a flat-plane crankshaft.

Engine development presented many challenges to the engineers. First among them was finding a way to fit the turbochargers alongside each of the V-8’s cylinder banks. The solution was to design the rear section of the chassis so that the engine sits 5 mm lower than it did on the 458 models. The list of new parts for the engine is long: a lightweight crankshaft, redesigned pistons and connecting rods, cylinder heads with reduced thickness near the combustion chambers, an intake plenum with unequal-length runners, and exhaust runners tuned for what Turconi called “the sharp, loud, unmistakable Ferrari sound.”

The redline of the new engine is 8,000 rpm (compared to 9,000 for the 458’s engine). With the generous torque curve, throttle response is instantaneous. In fact, when the manettino—the “little hand” ­driving-mode selector on a Ferrari steering wheel—is set to race mode, as it was at Fiorano, you have to be judicious with the accelerator or else the car will jump like a beast.

Taking the car away from the track for a drive through the countryside gave the locals their first look at the Rosso Corsa Metallizzato wonder. Most onlookers recognized it as a Ferrari, though the company says that 85 percent of the car is new, with only the roof remaining unchanged from the 458 series.

The new body reflects an emphasis on aerodynamic efficiency. Ferrari claims that compared to the 458, the new car benefits from slightly less drag and 50 percent greater downforce. The brand removed most of the active aerodynamic features that distinguished the 458, though the computer-governed variable flaps on the rear diffuser remain in place. The so-called aero pillar dominating the 488’s front end is augmented by a double spoiler that has been adopted and adapted from Ferrari’s Formula 1 cars. The spoiler’s upper element directs air to the radiators, while the lower one works in concert with the under-tray to generate downforce. The rear spoiler inducts air through openings at the base of the rear glass and directs it to exit points at the rear bumper. Deep indentations along the sides of the car feed air into the intercoolers.

“We want to quote from history,” said Flavio Manzoni, Ferrari’s head designer, in reference to the side openings, which resemble those on the 360 and the F430, V-8 models from the last decade. “Despite that, we want a modern, futuristic shape.” The 488 GTB certainly presented a visual contrast to the centuries-old campaniles and other structures in the villages of the Emilia–Romagna countryside.

Along a byway between villages, the car, set in sport mode, cruised in sixth gear as the road rose and fell. A bit of acceleration did not require downshifting because of the available torque and the revised gear ratios. The interior was sufficiently quiet for a car with a top speed of 205 mph, and visibility was good even when backing up.

The cockpit’s ergonomics will help drivers forget all the futzing and fiddling that older Ferraris required. The leather-upholstered seats fit just right, the steering was light but precise, and the automatic climate control worked like magic on a muggy day. Another attractive feature is the passenger-side instrument display—showing gear position, engine rpm, and road speed—which was adopted from the Ferrari FF and the F12 Berlinetta.

Ferrari expects to build 7,000 examples of the 488 GTB over the next four years. Considering the attributes it displayed at Fiorano and off the track, the car may have taken the brand through a crossover point where there is no turning back from turbocharging.