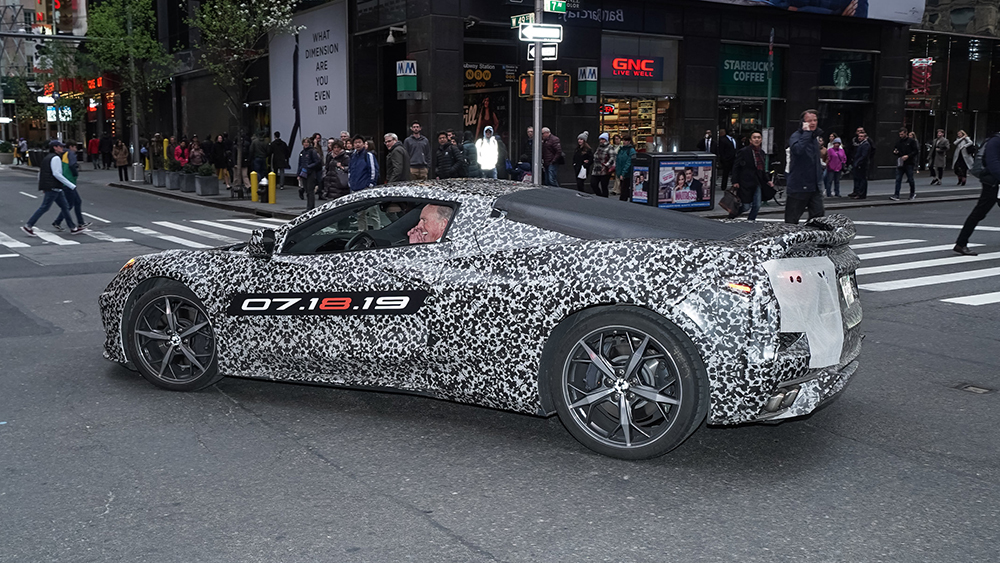 While it’s unclear if this C8 mule has the final engine setup or is just running something from the existing Corvette lineup, a witness to Jeuchter and Barra’s NYC ride tells Robb Report that it sounded “low and rumbly, like a Corvette should, with a hint of supercharger whine.”

Chevrolet is being tight-lipped about the powertrain specifications, but the folks over at Car and Driver have some solid intel about what the C8 will be packing behind the driver’s head. The launch vehicle sounds like it’ll be the base Stingray, and feature an upgraded iteration of the C7’s 6.2-liter V-8, tweaked to around 500 ponies and dubbed the LT2 to represent the placement of the engine. Tremac’s seven-speed dual-clutch automatic transmission will get the power down, and it doesn’t seem like there’ll be a manual option, which isn’t much of a surprise. More than half the current ZR1s were ordered in automatic spec.

Don’t expect Chevy to wait long before ratcheting up the performance and offering us the C8 Z06, a ZR1 and perhaps an apex hybrid that’ll bear Zora’s name (Zora Arkus-Duntov was the father of the Corvette and the man who originally conceived the Corvette’s mid-engine placement back in the ’60s). C&D believes the Z06 will have a 5.5-liter V-8 with a flat-plane crank, the ZR1 will tack on twin puffers to that set-up, and the Zora will have all that plus a front-axle electric motor to supplement everything and get a comma into the horsepower output.

Pricing is still up in the air, but early reports claim Chevy will keep things around $63,000 for the base units. Chevy has already launched a landing page for the C8 on its website so it probably won’t be too far after the C8’s debut in mid-summer that GM will start taking orders.