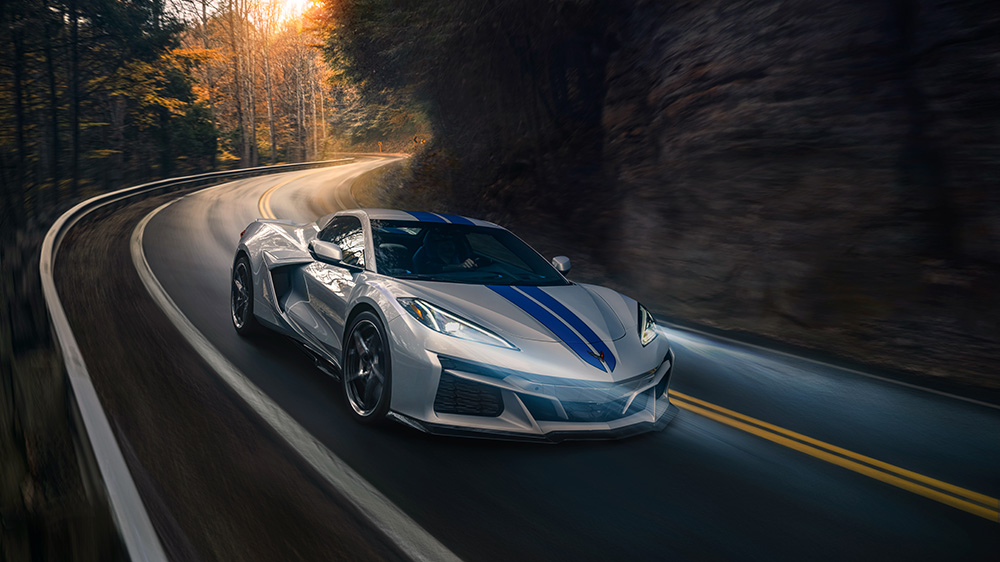 After years of rumors and teases, the first electrified Chevrolet Corvette is finally here.

On Tuesday morning, 70 years to the day after America’s sports car debuted at the 1953 GM Motorama, the Detroit giant unveiled a hybrid variant of its most iconic nameplate called the E-Ray. Better yet, the automaker managed to electrify its halo vehicle without getting rid of its trademark small-block V-8.

It’s not even four years old at this point, but the Corvette’s eighth generation is likely to go down as its most revolutionary. First, there was the shift to a mid-engine layout, putting the vehicle more in line with the best sports cars coming out of Europe. Now, though, Chevy has taken things up a notch by adding an electric motor to the mix. You’ll feel the difference, too, as the hybrid is now the quickest ‘Vette in history.

Robb Report got the chance to check out the latest C8 in New York last week. Here are our five big takeaways:

Corvette E-Ray Specs: The V-8 Stays in the Picture

Automakers like Ferrari or McLaren may have equipped their high-performance hybrids with twin-turbo V-6s, but not Chevy. The marque told us there was never any doubt about the choice—an eight-cylinder mill has been in every version since the 1950s—but that doesn’t make it any less impressive. The third C8 is the only sports car that pairs a naturally aspirated V-8 with electric responsiveness.

The mill is a 6.2-liter LT2 V-8 just like in the Stingray and can make 495 hp and 470 ft lbs of torque. Meanwhile, the front-positioned electric motor, which is powered by a 1.9-kWh battery, produces an additional 160 hp and 125 ft lbs of torque. Combine the two and you get 655 horses sad 595 ft lbs of twist, making the E-Ray one of the most powerful ‘Vettes ever (it’s only 15 hp less powerful than the high-performance Z06). But where it can’t be matched is acceleration. The E-Ray can rocket from 0-to-60 mph in just 2.5 seconds and cover the quarter-mile in an equally impressive 10.5 seconds. There’s no Corvette that gets there faster.

The E-Ray’s electric motor doesn’t just add power, it delivers it to all four wheels, making the model the first all-wheel-drive ‘Vette in history. You’ll be able to feel the difference as soon as you put your foot on the gas, too. Thanks to the presence of the electric motor on the front axle the new variant launches forward with zero hesitation, which we experienced firsthand on a test ride.

The hybrid assist also changes the car’s driving dynamic in interesting ways, making it as much a grand tourer as a sports car. Chevy says the car’s intelligent eAWD system is constantly reading the road and making adjustments based on traction and driving conditions, including applying more power to the front wheels to increase stability. Combine this with the standard Magnetic Ride Control 4.0 and brand-new Michelin Pilot Sport all-season tires, and you’re in for a driving experience that’s designed to be both comfortable and thrilling in equal measure. The eAWD system also means you can use the E-Ray as your everyday driver, even in areas where the winter months come with their fair share of snow.

Like the upcoming Porsche 911 hybrid, the E-Ray won’t need to be plugged in for charging. Instead, the electric motor’s battery is charged via regenerative energy generated by braking and coasting, as well as normal driving. There’s also a Charge+ feature triggered by a button on the center console that maximizes the energy going to the battery.

The E-Ray’s infotainment system also gives you access to a special performance app that allows you to monitor the hybrid-assisted powertrain in real-time. You can also use the system to select the hybrid’s brand-new Stealth mode. The drive mode, which was first hinted at in last week’s teaser footage, allows you to operate the car for a short amount of time using only electric power. Select it at startup if you want to pull out of your garage without waking up the neighbors in the morning.

Exterior and Interior: No Makeover but 14 New Colors

The E-Ray sports the same aggressive look and stance that has marked the C8 since its debut in the summer of 2019. Its angular body is almost identical to that of the Z06 (both variants are 3.6 inches wider than the Stingray). You’ll be able to select from 14 different exterior colors, including the brand-new Riptide Blue, Seawolf Gray and Cacti, as well as an optional, model-specific Electric Blue stripe package. There’s also special E-Ray badging, including a new logo on the trunk lid. The two-door rides on a set of staggered alloy wheels—20 inches up front, 21 inches in the rear—that feature a unique twisted five-spoke star design.

Inside, the car has the same jetfighter-style cockpit as other C8s. The new Artemis Dipped motif does separate the E-Ray from other C8s, adding deep green tones throughout the cabin. You can also customize the space with one of two carbon-fiber trim packages.

Corvette E-Ray Price: How Much It Will Cost—and When You Can Buy It?

As for when you can buy it—that’s still being worked out. Chevy says the vehicle will launch sometime in 2023 as part of the 2024 model year, though, so it shouldn’t be too much of a wait.