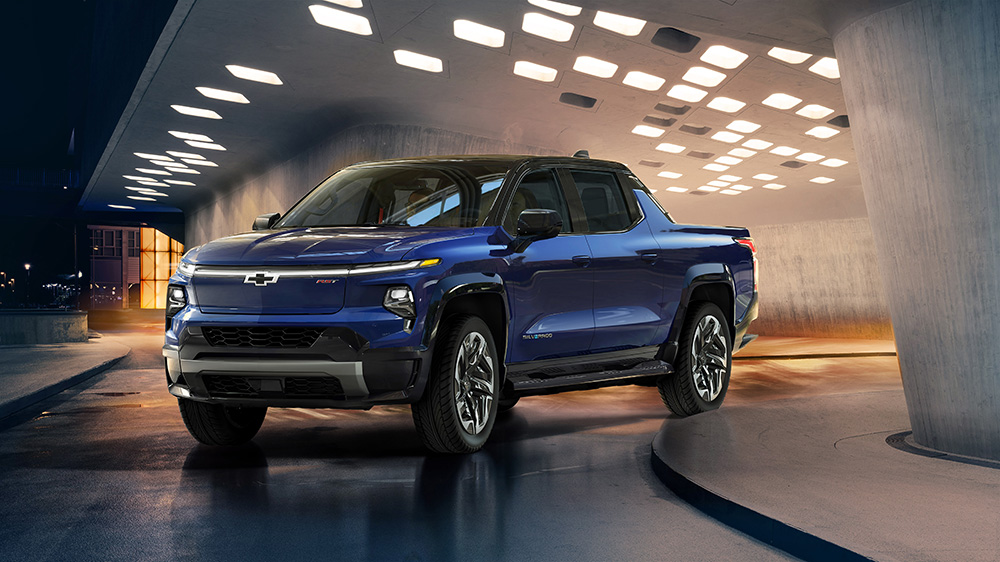 The Chevrolet versus Ford debate is finally ready for the electric revolution.

On Wednesday, Chevy finally unveiled its answer to the all-electric F-150 Lightning—the Silverado EV. While both brands have released battery-powered vehicles before—including one of the more popular EVs currently on the market—this is the first time they’ve released electrified models that that will be in direct competition with one another (along with other electric pickups, like the much-delayed Tesla Cybertruck). You’ll get to decide which side you’re on sooner rather than later, too. The F-150 Lightning, which arrives later this year, will make it to market first, but the all-electric version of Chevy’s most popular vehicle won’t be far behind. The automaker plans to start selling the electric truck next year.

Although there are several differences between the Silverado EV and its gas-powered sibling, the biggest, without a doubt, is under the hood. Like sister company GMC’s electric pickup, the Hummer EV, the electrified Silverado will be built on General Motors’s Ultium EV platform.

The pickup will initially be available as two variants, the high-end RST and the Work Truck (WT), both of which are powered by a 24-module Ultium power pack. Their powertrains consist of front- and rear-drive motors, giving both trucks four-wheel drive and allowing for four-wheel steering. The two motors combine to deliver up to 664 horses and 780 ft lbs of twist on the range-topping RST and 510 horses and 615 ft lbs of twist on the WT. The dual-motor setup will also rocket the RST from zero to 60 mph in less than 4.5 seconds.

Just as impressive is the range target Chevy has set for its all-electric pickup. The automaker says the RST and WT will be able to travel 400 miles on a full charge, which is 70 miles more than the Hummer EV (though that pickup has 1000 hp). This figure isn’t EPA certified—and won’t be until the truck is ready for series production—but if accurate, the electric Silverado will be one will be one of the longest-range EVs available when it launches. If you need even more range, it won’t take much time to top up the battery, either. Chevy says you’ll be able to add 100 miles in just 10 minutes with a DC fast charger. Like the F-150 Lightning, the Chevy EV will also be able to help charge other EVs via a special charging cord.

As popular as the Silverado is already, Chevy knew it didn’t have to change the look of the truck too much. At a glance, the EV looks just like a sleeker, more aerodynamic version of the standard Crew Cab model  but lacks the gas-powered version’s gigantic grille (there’s no engine to cool after all). Look at it from the side, though, and you’ll notice more differences. Specifically, the EV takes a couple design cues from the discontinued Avalanche (h/t Car and Driver). These include its unibody styling and Multi-Flex tailgate.

That last feature isn’t just a nod to Chevy’s past. It serves a valuable purpose, allowing you to increase cargo space dramatically. With the tailgate fully up, the Silverado EV cargo bed is just shy of 6 feet long. Lower the tail gate and rear cab wall (which still leaves room for one passenger in the back) and the space grows to 11 feet. There’s also an available tonneau cover if you need to keep your cargo dry. The EV’s frunk—or eTrunk, as Chevy calls it—also has room for a large suitcase and other bags.

Inside the Silverado EV RST  Chevrolet

The cabin of the Silverado EV won’t look nearly as futuristic as that of the Hummer EV, but it will still feature a number of high-tech features. On the RST, these include 11-inch instrument gauge, a multi-color driver head-up display and 17-inch diagonal touchscreen infotainment system from which you’ll be able to access GM’s hands-free Super Cruise driver assistance technology. The feature can help you navigate over 200,000 miles of compatible roads in the US and Canada. The WT variant, meanwhile, has an 8-inch gauge cluster and 11-inch center display.

The two-row cab will have room for up to five passengers, though seating capacity shrinks to three when the cabin wall is lowered to increase cargo space. There’s plenty of storage, too, including 7 gallons of space in the center console.

How Much Your Silverado EV Will Cost

We’ll have to wait for full pricing info for the Silverado EV, but Chevy has given us a pretty good idea of what to expect. Costs will range widely, depending the model and amenities. The WT, which is aimed at fleet customers, will start at $39,900, while the fully loaded RST First Edition will cost $105,000. That means the price for its base model starts lower than the F-150 Lightning ($41,000), and its range-topping variant will cost less than the Hummer EV Edition 1 (which tops out at $112,595).

Both versions of the Silverado EV will launch next year. The WT will be available in the second quarter of 2023, while the deliveries of the RST will begin that fall. You can reserve either through the brand right now.