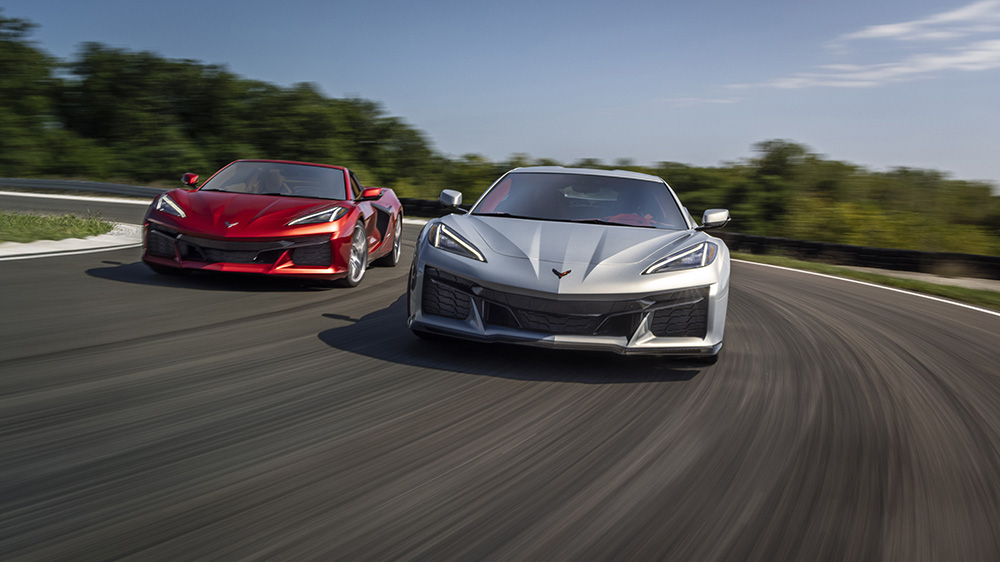 After more than a year of rumors and speculation, the mid-engine Chevrolet Corvette Z06 is finally here.

On Tuesday, the Detroit automaker unveiled the first high-performance variant of the iconic nameplate’s eighth generation. And if it took longer than some ‘Vette enthusiasts would’ve preferred, the car’s beastly new engine should help make things right in Chevy world again.

The Z06’s new V-8 is easily the biggest difference between it and the standard C8 Stingray. Dubbed the LT6, it’s a DOHC 5.5-liter naturally aspirated V-8 with a flat-plane-crankshaft similar to the engine in the C8.R race car, according to the marque. The presence of a flat-plane crank has generated its share of media buzz. That’s because it keeps weight down and allows the mill to rev faster than a V-8 with a more common cross-plane-crank, which translates into more power, speed and sound. Mated to a Tremac eight-speed dual-clutch automatic transmission (sorry, no manual option here) that sends power to the rear axle, the engine pumps out an impressive 670 horses and 460 ft lbs of twist and has a redline of 8,600 rpm.

To put that in context, the Stingray’s very capable LT2 V-8 can generate 490 hp and 465 ft lbs of torque. Sure, the Z06 has slightly less torque, but there’s also an additional 180 horses to make up for it. On top of that, as Car and Driver points out, the LT6 has even more oomph than the 622 hp 6.2-liter mill in the 2014 Mercedes-Benz SLS AMG Black Series, which previously held the title of most powerful naturally aspirated V-8 in a production vehicle.

Chevy hasn’t released performance numbers for the Z06—expect to see them closer to its launch date—but we’d wager you’ll be able to feel the difference when you’re behind the wheel. The expectation is that the performance variant will be even quicker off the line than the other mid-engine Corvette, zooming from zero to 60 mph in 2.6 seconds. Top speed should be at least 186 mph but could be even more. Then, of course, there will be the scream that only a naturally aspirated flat-plane-crank mill can deliver: We’ve already heard it and it sounds more like a Ferrari than an American sports car.

To help maximize the LT6 engine, the Z06 wears a new and more intense aero package. This includes a new front fascia with a larger splitter and a low fixed wing in the rear. If you want an even more extreme treatment, you can opt for the track-focused Z07 package that includes an even larger front splitter, dive planes, underbody strakes and the more prominent rear wing, all of which combine to create more downforce. Even without these carbon-fiber elements, the newest ‘Vette stands 3.6 inches wider than the Stingray, allowing for better handling and increased airflow through the side vents.

The Z06 also features a specially calibrated suspension with Magnetic Ride Control that is much stiffer than that found on the Stingray. It’s so rigid that no additional bracing was required for the optional removable hard-top. The variant also comes with a set of spider-pattern forged alloy wheels that are the largest in Corvette history. These come wrapped in 20-inch, 275-series rubber tires in the front and 21 inch, 375-series rubber tires in the rear. If you opt for the Z07 package you get carbon-fiber wheels that shave 41 pounds off the car’s weight, as well as larger Brembo ceramic brakes and a set of wider Z06-specific Michelin Sport Cup 2 R ZP tires.

Although the switch to mid-engine layout turned off some purists from the get-go, the C8 has proven itself time and time again since its launch. This would appear to be even more true of the Z06, which, at first blush, appears to be the high-performance variant enthusiasts were dreaming of. We’ll get the chance to find out next summer when the newest ‘Vette goes into production. No pricing has been announced as of writing, but we wouldn’t be surprised if the LT6 V-8 alone runs higher than a fully loaded $100,000 Stingray convertible.

For true ‘Vette lovers, that could turn out to be a relatively small price to pay. But you you best start now—at least one dealer already has a waiting list 1,000 people.

Check out more photos of the Z06 below: