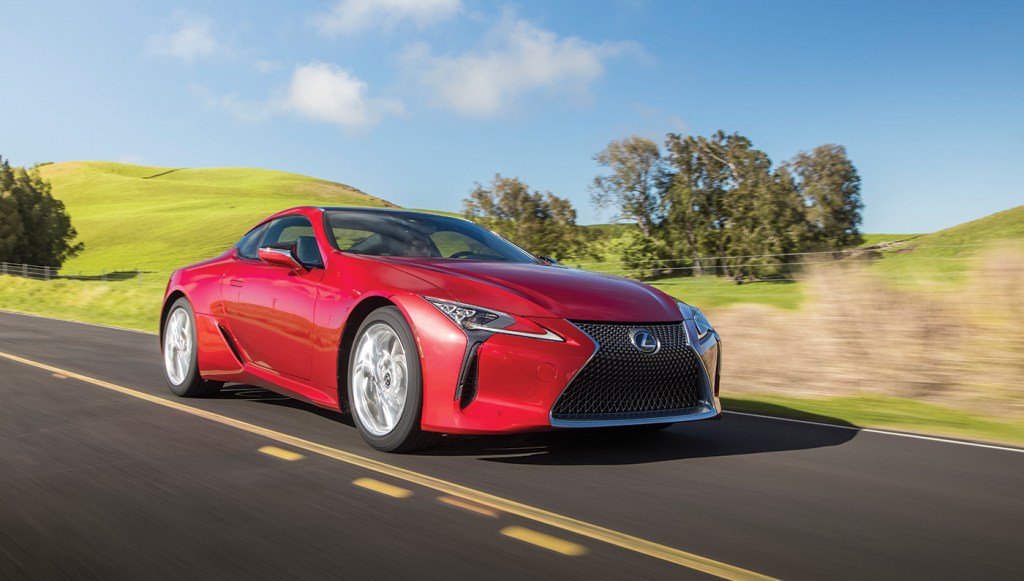 The grand tourer shines in a Big Island test-drive.

Against the lunar landscape of Hawaii’s Kona coast, the Lexus LC 500 (lexus.com) appears both elegant and menacing, and not at all bland or boring. It displays the same wide and low athletic stance and complex curves as the concept car on which it is based, the LF-LC that first appeared in 2012.

The LC 500 is a superb rear-wheel-drive grand tourer, powered by a 471 hp, 5-liter V-8 that produces a growling exhaust note and smooth, effortless acceleration. The new 10-speed transmission maximizes fuel economy in comfort mode and holds the gears well in sportier settings, and it can be shifted manually with steering-wheel paddles.

Lexus says the chassis is the stiffest and most agile it has ever built, and our ride on the Big Island’s winding roads supports this claim. The company also offers a more softly tuned LC 500h hybrid, which pairs a 3.5-liter V-6 with two electric motors for a total output of 354 hp. Both cars go on sale in May. The LC 500 has a base price of $92,000; the hybrid starts at $96,510.

In the cabin, nearly every surface is covered with leather or Alcantara, and the exterior-color selection includes several pearls and metallics, among them Sonic Titanium, a shiny gray that glows softly under Hawaii’s setting sun.

The chief designer for Lexus speaks with Laura Burstein about the design of the LC 500 and what inspired it.

Why was it important for the LC 500 to make a bold design statement, and how was that achieved?

We wanted to create a more dynamic, younger brand image, so we had to do a big jump. We always focused on dynamic elegance, but this time we got a new platform, which has [space for] big tires and a big track. It shows a new emotion for our brand.

What were your design inspirations?

We had a 2012 motor-show car, the LF-LC, but that was simply a design study. That car looked great, but it was impossible to build. Also, many small details carry over from the LFA [the supercar that Lexus produced from 2010 to 2012], like the ring meter on the instrument cluster and the control stalks on either side.

Were you influenced by anything else?

We found some leaves and plants and did digital scans, then transformed those shapes on the computer and put them into the car. Also, we studied housing and architecture.

Are there any styling elements that make you particularly proud?

The exterior has lots of depth. You can see a very three-dimensional shape, especially at the rear fender. In the interior, we have almost no [visible] plastic parts, so it has a very welcoming feeling, and luxurious.