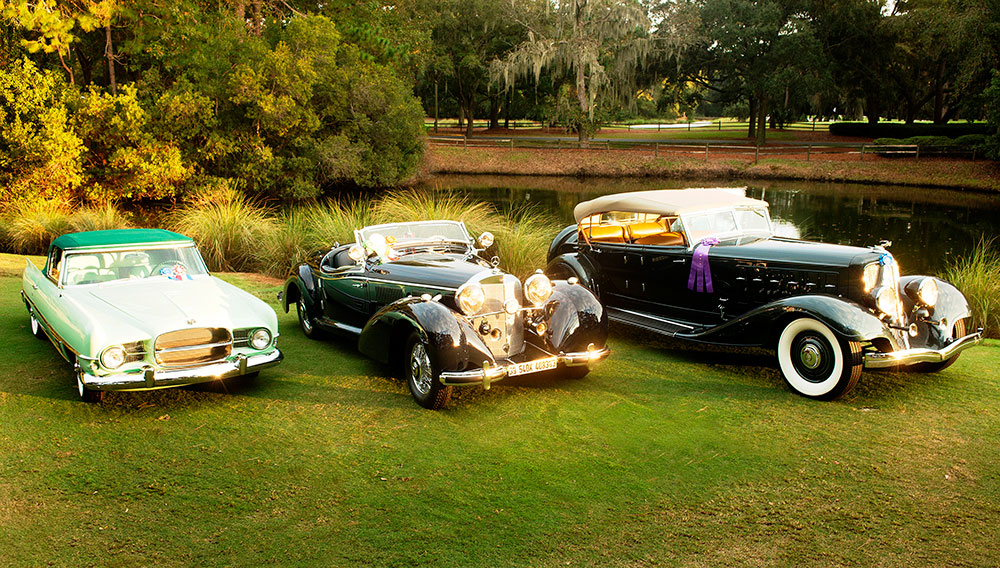 The Imperial, belonging to Joseph and Margie Cassini of West Orange, N.J., brought additional limelight to Chrysler, which was also this year’s featured marque. The custom Phaeton features a long louvered hood, and a second windshield protects backseat passengers when the tan soft top is lowered. The undeniable classic was displayed alongside another great Chrysler—the one-of-a-kind 1937 LeBaron-bodied Imperial that was created especially for Della Chrysler, the wife of Walter P. Chrysler.

The Westin Hilton Head Island Resort & Spa, which adjoins the golf club and served as the host hotel for the weekend, also welcomed Auctions America for the first time with an offering of about 95 collector vehicles. One of the most desirable to cross the auction block was a 1967 Ferrari 330GTC, which sold for $638,000. Another highlight was a 1989 Lamborghini Countach 25th Anniversary Edition that sold for $343,750.

The weekend began with a tour of about 30 classic cars, which headed in procession around Port Royal Sound to neighboring Parris Island—home of the United States Marines Corps Recruit Depot. Chrysler stood out in this group as well, with John and Lynn Heimerl’s rare 1935 Chrysler Imperial Airflow coupe drawing attention. The range of other cars extended from a Judkins-bodied 1932 Duesenberg coupe to a gaggle of mid-1950s Ford Thunderbirds and a popular Volkswagen Microbus.

The Car Club Showcase brought together the best from about 15 Southeastern car clubs, and the Motoring Midway event presented the GMC-sponsored Life in the Suburbs exhibit. This nostalgic presentation grouped hot rods, Cushman motor scooters, a Coca-Cola-themed cab-over truck, and even a Divco milk truck, reminding spectators of the charms of each. (hhiconcours.com)