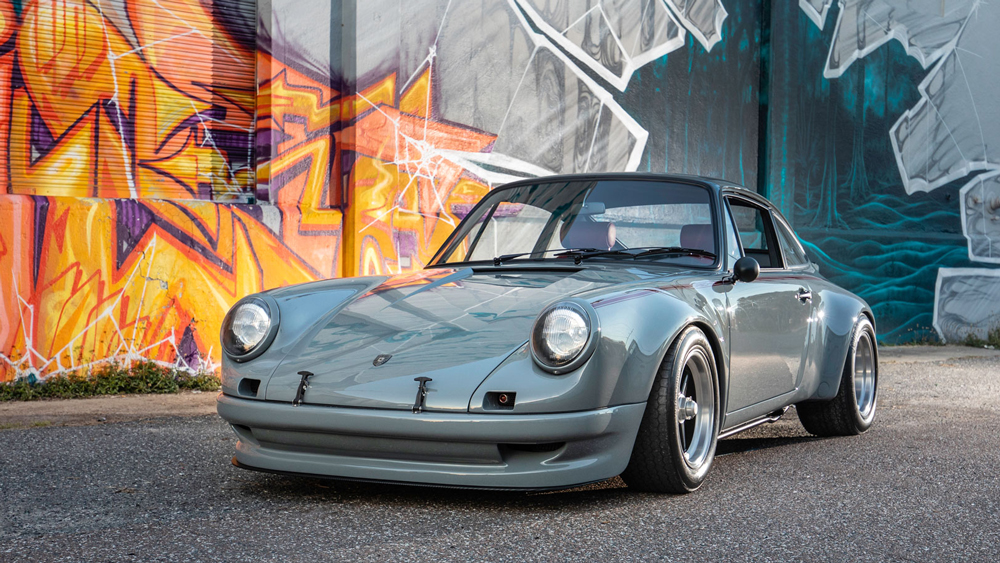 Jim and Jason Faulkner, the father and son co-founders of Classic 9 Motorwerks, together share decades of combined Porsche racing experience and have now built a reputation with their careful and correct Porsche 911 restorations. About their mission, the elder Faulkner, who also brings an aesthetic sensibility honed by more than 25 years as a practicing architect, says, “We envisioned Classic 9 Motorwerks as a business that honors Porsche’s legendary racing heritage.”

In tribute to that history, Classic 9 made some big noise at the 2020 Amelia Island Concours d’Elegance, as well as at Luft 7 last September, showing its hand-built jewel-box of a car, the C9 RS Turbo. Wearing Outlaw Gray paint and red graphics, the sleek-but-familiar shape attracted Porsche enthusiasts who appreciate the meticulous execution and creativity of a no-holds-barred 911 build.

About the genesis of the C9 RS Turbo, the younger Faulkner explained, “Our car is an evolution of the 1973 Porsche 911 RS, and is inspired by Porsche’s 911 RSR Turbo race car.” Porsche’s first 911 Turbo came to market in 1975, with the factory needing 400 examples to homologate its 911 for Group 4 racing. But public demand was fierce and, eventually, about 21,000 G-Series 911 Turbos were made through 1989, when production changed to the then-new 964 iteration of the 911. But the first 911 Turbos for the street—more properly designated by internal type number 930—were as intense as the public’s demand for them. It was a car that did not suffer fools, as ferocious as a drowsy gila monster that awakens instantly, snapping around and biting an inattentive or inexperienced handler.

Looking back, the evergreen 911 is longer-lived than even the oldest gila (36 years in captivity), and so Classic 9 can use a donor chassis (furnished by the customer) from two decades of 911 production, spanning 1969 to 1989. In the spirit of the Porsche factory’s 1973 Carrera RS, the C9 RS Turbo is offered in both Touring and Sport configurations.

The heart of the C9 RS Turbo is a 3.0-liter, twin-plug turbocharged flat-six with Motec engine management that develops 420 hp and 380 ft lbs of torque; massive numbers for a 2,340-pound car. A tried-and-true G50 five-speed transmission and limited-slip differential make quick work of covering zero to 60 mph, all in under four seconds, while the car heads for a top speed greater than 170 mph.

Not counting the client-supplied donor car, the build starts at $510,000.  Photo: Courtesy of Classic 9 Motorwerks.

The original Carrera RS, and certainly the track-focused RSR, were anything but luxurious when introduced. Conversely, the C9 RS Turbo is simple but sophisticated. Classic 9 Motorwerks takes a page out of the bespoke handbook to offer interiors finished in hand-tooled leather and aluminum that complement the C9’s build quality and starting price of $510,000, which doesn’t include the client’s donor 911.

Classic 9 Motorwerks is headquartered in a brand-new 8,000 square-foot facility in Jacksonville, Fla. Featuring a showroom and an expansive assembly facility, the new base of operations offers ample workshop space for the design and development of a forthcoming lineup. The latter includes the C9 GT6, a heritage-inspired evolution of the 914/6 GT from 1970 (in touring configuration), as well as the C9 CS, an interpretation of the lightweight and elemental 911 ST, of which a mere 24 examples were built for racing in 1970 and ’71.