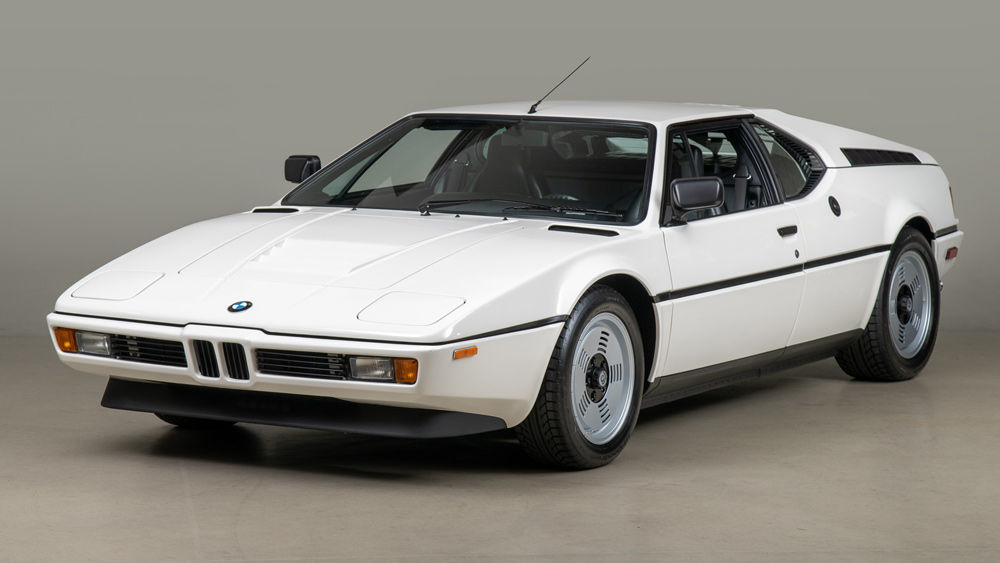 For BMW. which built its reputation on the BMW 2002, the charming little sports sedan that had all the aerodynamic efficiency of a shoebox, the sleek, mid-engined M1 was a revelation, and a first in many ways. BMW’s first mid-engined production car, it was also the first vehicle developed by the BMW Motorsports division, headed by Jochen Neerpasch, to compete in racing, specifically Group 4 Procar.

BMW M-cars may be frequent sights today, but it wasn’t until the 1980s that 3, 5 and 6-Series BMWs began to wear the M badge striped blue, purple and red. Initially, BMW enlisted Lamborghini to build the necessary 400 examples for homologation, but the arrangement was scuttled and BMW took the M1 project on in its entirety, eventually constructing 453 examples between 1979 and 1981.

While known to BMW addicts as the E26, the M1 was designed by Italdesign’s Giorgetto Giugiaro and bodies were made in Italy, with assembly completed by Karosserie Baur, the German coachbuilder that had been building BMWs since the 1930s. Under the wedge-shaped fiberglass body was a longitudinally mounted, 3.5-liter inline-six DOHC engine mated to a five-speed ZF transmission. The power train developed 274 hp in street form. Despite its race-born, tubular-steel spaceframe chassis, the M1 belonged mostly on the street, considering its weight of nearly 3,000 pounds—hefty for a race car—conspired against any motorsports winning streak.

The car has been in the stewardship of a single family since new.  Photo: Courtesy of Canepa.

For many years, these outliers in the BMW lineage received less attention than they deserved, but those days are behind the M1, with the cars finally being coveted among collectors who want a friendly exotic with a distinctive shape and great significance in BMW history.

This example is offered by Canepa in Scotts Valley, Calif., the team of specialists whose fastidious restorations and upgrades for the Porsche 959 have garnered worldwide acclaim. In single-family ownership since new, this M1 was originally imported to San Francisco. During the ensuing years, it received a color change from blue to white, and retains its original black interior with new, original equipment fabric seat inserts.

Canepa has brought the vehicle to concours-preservation standards.  Photo: Courtesy of Canepa.

In storage from the 1990s until 2010, it was recommissioned and, in 2019, received a complete mechanical servicing and cosmetic refurbishment by Canepa to concours-preservation standards. Today, the 22,760-mile M1 is so complete, it retains its original tool roll, road hazard triangle and even a factory-issue medical kit, with unopened bandages still in their original wrappers.