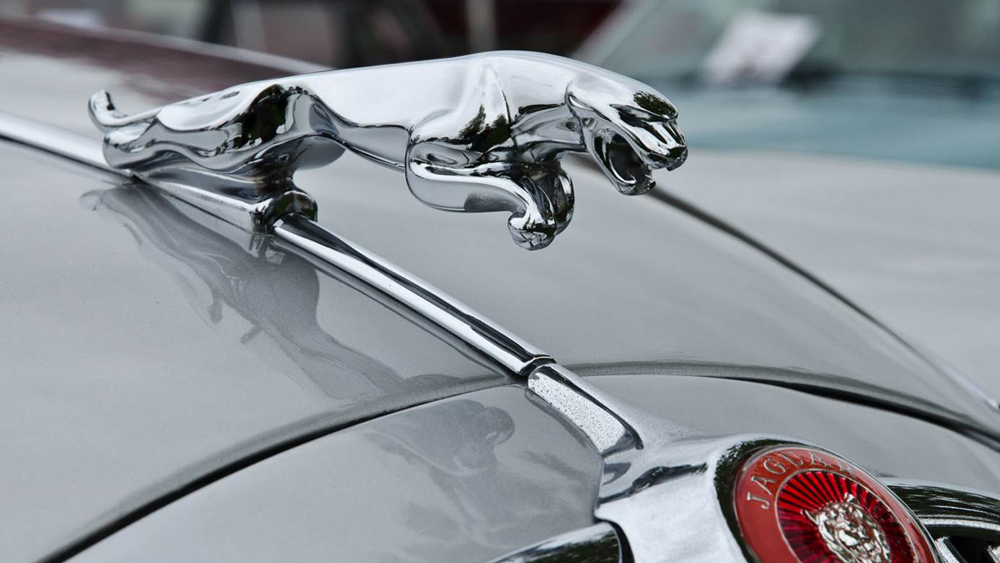 Jaguar’s renowned hood ornament in the form of a leaping cat was first seen on one of its automobiles in 1945—a symbol of grace, power and elegance that later adorned many of the company’s legendary models. As there’s already a growing hullaballoo about the 60th anniversary of the Jaguar E-Type in 2021, we wanted to remember some of the company’s finest sports cars, a legacy that stretches back long before the E-type to the gloriously stylish XK120, and even further still.

The XK120 was introduced to the US in late 1949, the aluminum-bodied roadster had curves in all the right places and was achingly beautiful. The two-seater was also the fastest production car in the world when it came on the scene—the model prefix referring to a top speed of 120 mph.

Priced at $3,495 when released, the very first example was delivered to Hollywood star Clark Gable and proved a sensation. Powered by a 3.4-liter engine, the XK120’s elegant lines were said to be inspired by the prewar BMW 328 Mille Miglia.

Aficionados of the marque might argue that the SS Jaguar 100, launched more than a decade before, was actually the company’s original sports car. The British manufacturer had to drop the SS moniker—Swallow Sidecar—after World War II because of its association with the Nazis.

The SS Jaguar 100 was visually stunning and boasted a top speed of 101 mph, the least-expensive British car of the era to reach three figures. Designed by Sir William Lyons, the 1935 classic featured a bonnet that stretched forever, cut away doors and huge chrome headlights.

The styling was the epitome of a 1930s British sports car and the later XK120 couldn’t have been more different. However, when the XK changed from an aluminum body shell to steel in 1950, the increase in weight affected performance.

The uprated XK140 was unveiled in 1954 followed by the XK150 in 1957. The latter looked dated compared to key rivals and only survived until 1961. That’s when the Jaguar E-type was born—a model often voted the most beautiful car in the world.

In 1961, a speed of 70 mph was considered fast on the road. The E-type claimed a top speed of 150 mph and was gorgeous from every angle. It epitomized the era and had performance to match. The original Series I was the most attractive, as subsequent versions featured larger engines but looked flabby by comparison. Such was the car’s allure that it soldiered on until 1975 before it was replaced by the XJ-S.

The Jaguar E-type is regarded by many as one of the most beautiful car designs to date.  Photo: Courtesy of Jaguar Land Rover Automotive PLC.

Billed as the ultimate grand tourer, the XJ-S lacked the style of the svelte E-type and was initially blasted by the motoring press—just look at those dreadful bumpers and awkward rear buttresses.

But a 5.2-liter V-12 engine gave the XJ-S a serious turn of speed and was a cost-effective means to enjoy supercar performance at half the price of many others. It remained in production for 21 years, a staggering achievement.

By 1996, Jaguar was in dire need of a replacement for the XJ-S, and Project X100 was the answer. Designated as the XK8 when premiered, the model was available as a coupe or convertible and was well received. It did, however, still lag behind the best from Porsche and Mercedes. The addition of the supercharged XKR, and then an updated 2006 model, proved a significant step forward. By the time production ceased in 2014, many people were flummoxed as to why Jaguar was killing off a very appealing car.

The 1996 Jaguar XK8 was referred to as Project X100 during development.  Photo: Courtesy of Jaguar Land Rover Automotive PLC.

The reason turned out to be the current F-type, which offers drivers a well-packaged sports car that blends performance and great looks. It’s not exactly an E-type, but offers an impressive motoring experience all the same.

As electric power trains become prominent, the next generation of Jaguar sports car will likely have no conventional engine at all. It will be the end of one era and the start of another—a time when Jaguars may no longer roar, but will surely still make their presence known.