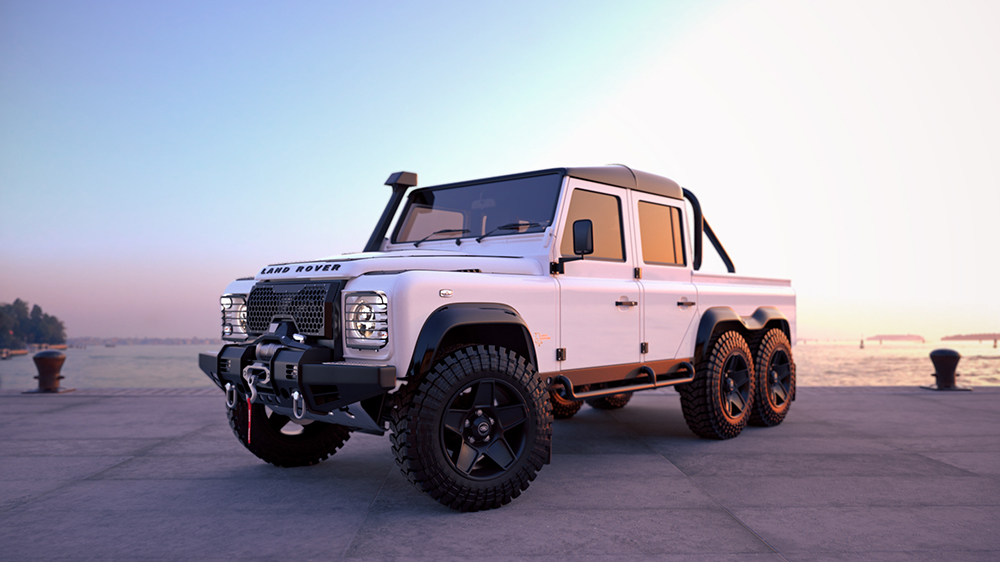 Classic Overland wants you to know there’s no reason to stop at four wheels.

The Georgia-based Land Rover restoration experts have just unveiled their latest 6×6, the “White Rhino.” The new build is based on an old truck used to carry fire fighters in South Africa and is easily one of the shop’s most impressive yet.

The “White Rhino” follows in the footsteps of Classic Overland’s equally striking “Project Black Mamba” utility vehicle from a few years back. Like its predecessor, it’s based on a Defender truck that started out life as a 6×6. But just because the company didn’t have to add another set of wheels to the off-roader doesn’t mean it hasn’t been thoroughly upgraded inside and out.

The biggest change is that the 6×6’s specially tuned 3.5-liter V-8 has been swapped out for a supercharged 6.2-liter LT4 mill sourced from GM. The beastly mill is mated to a 10-speed automatic transmission and can pump out up to 682 horses. That’s more than enough muscle to use it as a specialty off-roader, but we won’t blame you if you just want to used it as your daily driver.

Whatever you end up using it for, the “White Rhino” is sure to turn heads. Classic Overland has finished the off-roader in a brilliant coat of Icy White, which is offset by matte black accents. The vehicle has also been equipped with LED lights, a snorkel, custom step bars, a winch and rides on a set of all-black Kahn Mondial Retro wheels wrapped in chunky all-terrain tires. The shop hasn’t shared images of the interior, but says it will be covered in premium leather. Whether it’s fresh out the car wash or covered in mud from your last adventure, it’ll look the part.

If you’re looking to add a classic off-roader restomod with real character to your garage, there aren’t many better options right now than the “White Rhino.” Classic Overland is aware of what it has on its hands, though. That’s why the build starts at $400,000. You can also ask them to build a completely different Defender too.

Click here to see all the photos of the Classic Overland “White Rhino” Land Rover Defender 6×6.