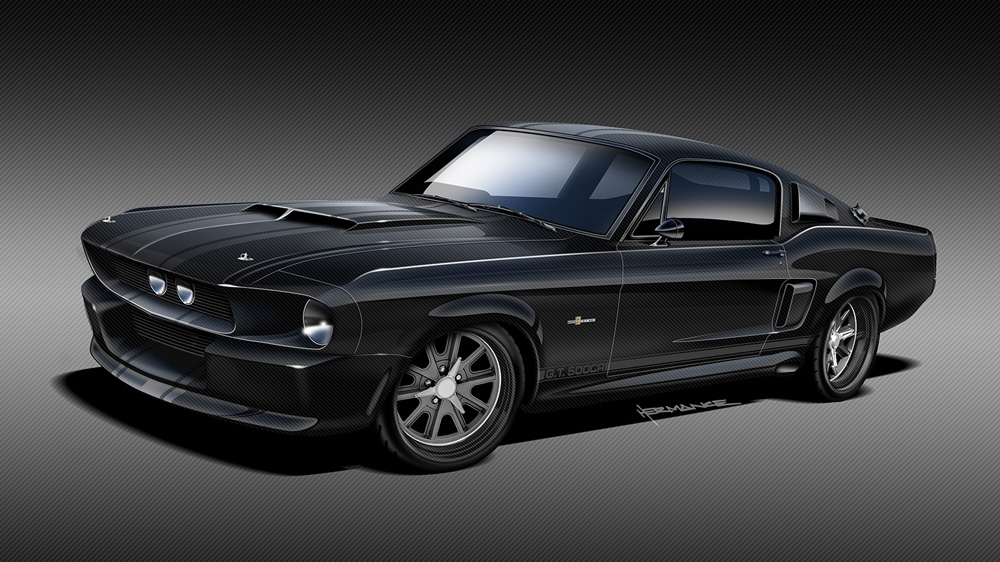 Few automobiles epitomized American muscle like the Shelby GT500 when it was introduced in 1967. A meaner Mustang, the original model carried fiberglass body panels and a 355 hp, Ford FE Series 428 cubic-inch V-8 that could launch the 3,370-pound two-door from zero to 60 mph in 6.5 seconds before covering the quarter mile in 15 seconds. Remember, we hadn’t landed on the moon yet and the Beatles were still together—these performance specs were newsworthy for the era.

Flash-forward 53 years and this particular pony is making headlines again, this time thanks to Oklahoma-based Classic Recreations and its “new” 1967 Shelby GT500CR Mustang. Currently in the development phase, the vehicle is set to be the only carbon-fiber version of the iconic model.

“I was really inspired by Carroll Shelby,” says Jason Engel, founder and president of Classic Recreations, a company sanctioned by Ford and Shelby American to manufacture continuation cars and restore their respective models. “His legendary designs and functionality blend so well, and the GT500 is one of the most coveted muscle cars in the world. I couldn’t ignore that.”

To make this composite restomod a reality, Engel has collaborated with the team of fabricators at SpeedKore Performance Group out of Wisconsin. The process begins with the steel tub of a donor Mustang from 1967 or ’68. A 3-D model is then made based off a scan of a conventionally bodied Shelby GT500CR from Classic Recreations before a CNC machine makes the molds for the aerospace-grade carbon-fiber panels. The latter are then cured in an autoclave.

As with other GT500 builds from Classic Recreations, this latest offering will pair a Tremac five-speed manual transmission (although six-speed manual and automatic options are also available) with one of several possible engine selections. Among the latter is a supercharged 427 cubic inch beast that makes 900 hp—mind-boggling output, especially considering that a stock 2020 Mustang Shelby GT500 from Ford boasts 760 hp.

The car will be built to order and benefits from coilover suspension, rack-and-pinon steering and Wilwood brakes, although a host of upgrades will also be available to prospective owners. After the $214,900 starting cost of a compatible base model Shelby GT500CR from Classic Recreations, the painted carbon-fiber package is priced at an additional $55,000, or $60,000 for exposed weave.

“I remember hearing Carroll [Shelby] dream about carbon fiber and his vision for the future of his vehicles in the early ’90s, Engel says. “Ever since then, I have dreamed of helping see that vision come true and am finally making it happen.”