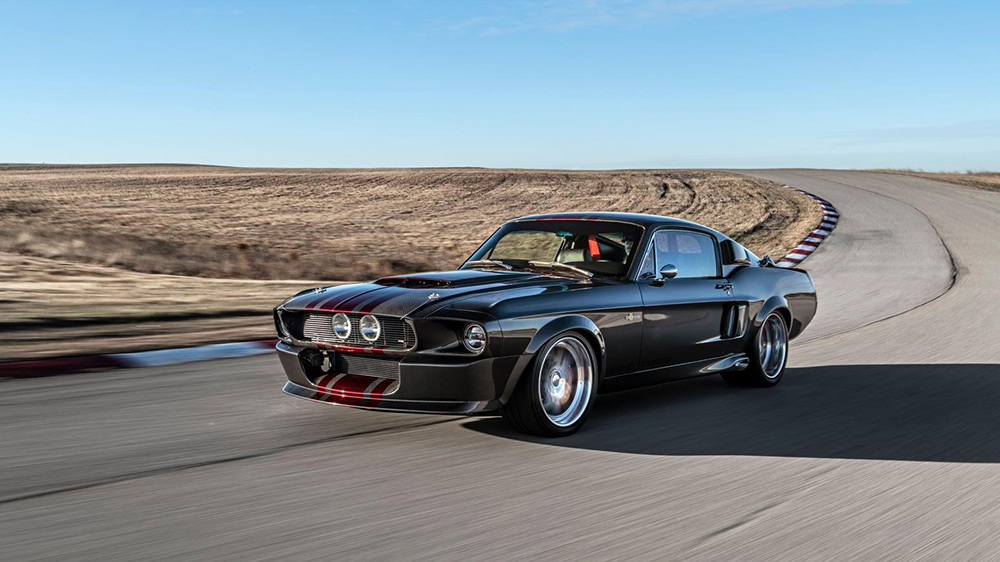 The carbon-fiber muscle car is having a moment.

Classic Recreations has just unveiled a new 1967 Shelby GT500CR Mustang, its first to feature an entirely carbon-fiber body. The custom shop, which is responsible for all of Shelby’s officially licensed continuation cars, teamed up with Speedkore to design and fabricate the ultra-lightweight body.

The process is nothing if not high-tech: The shop bluelight-scanned the steel body of a 1967 GT500CR, ran it through CAD and then permanently enshrined it in plugs, which will be used to make future molds. The resulting exterior is made up of autoclave-cured panels that form a blemish-free “exact-match replication” of a Vintage Shelby GT500—except this one weighs 600 pounds less.

The lighter body doesn’t come at the cost of power. Under that carbon-fiber hood is a third-generation Ford 5.2-liter Coyote engine with a 2.9-liter Whipple supercharger. Mated to a 10-speed automatic transmission, it’s capable of churning out 810 horsepower and 600 ft lbs of torque. Other modern-day features include an adjustable Detroit Speed suspension, JRI Coilover shocks, quadralink rear suspension, high-performance Wilwood brakes, roll bar and rack and pinion steering. The muscle car also rides on three-piece wrapped in BFGoodrich Rivals tires.

“This first car in the production series demonstrates our ability to engineer and handcraft amazing cars by collaborating with key partners like SpeedKore,” Jason Engel, founder and co-owner at Classic Recreations, said in a statement. The carbon-fiber Shelby, Engel claimed, has a power-to-weight ratio “on par with most exotic vehicles.”

The lithe new GT500CR starts at $265,000 and is available with several different drivetrain options. A limited-release Carbon Edition Shelby GT500CR, which features special badging and a Shelby serial number, starts at $298,000 and can be upgraded to the customer’s preference. Ordering information is available through the shop’s website now.

This isn’t the first carbon-fiber restomod we’ve seen this week. Speedkore also unveiled their 1970 Dodge Charger Hellraiser. The sinister-looking ride, which was commissioned by comedian Kevin Hart, features a 426 Hemi that delivers a jaw-dropping 1,000 horses and 950 ft lbs of twist.

Who says muscle cars are dead?