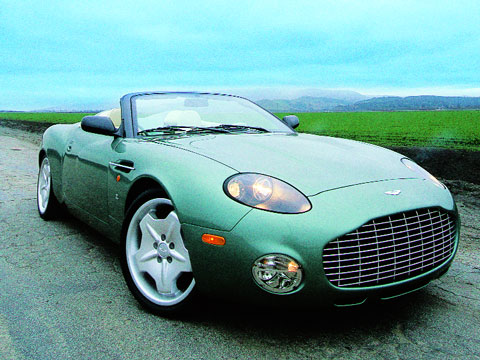 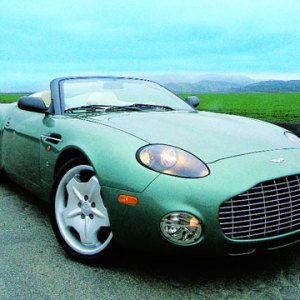 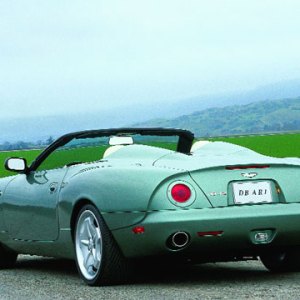 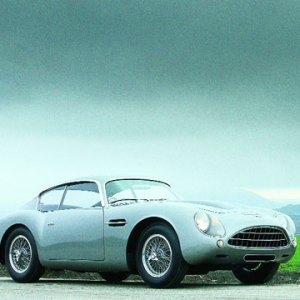 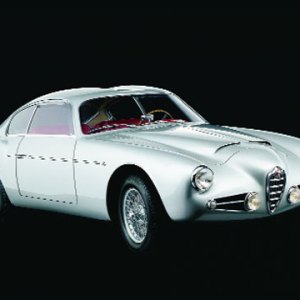 In all walks of life, certain name pairings guarantee results that transcend the ordinary. Think Astaire and Rogers, Hope and Crosby, Lennon and McCartney, Montana and Rice, and—for auto enthusiasts—Aston Martin and Zagato. When the talents of the venerable English auto firm and the renowned Italian coachbuilder are combined, car collectors immediately line up, checkbooks in hand. The team’s latest instant collectible is the Aston Martin American Roadster 1.

At the 2001 Pebble Beach Concours d’Elegance, Aston Martin CEO Dr. Ulrich Bez and Zagato President Andrea Zagato spoke about rekindling the companies’ relationship, which began in 1960 with the DB4 Zagato but had remained dormant since the Volante Zagato in 1987. At the 2002 Pebble Beach event, only a year after Bez and Zagato’s initial discussions, the DB7 Zagato made its public debut. Within weeks, the limited-production run of 99 cars was sold out, leaving at least 150 other Aston Martin enthusiasts wishing that they had placed their deposits more hastily.

Many of the DB7 Zagato inquiries and deposits came from Aston Martin’s American clientele, which underscored a dilemma for the carmaker. Because the model featured a shorter wheelbase (and thus a modified chassis) compared with the current DB7 Vantage or Volante, it would have to undergo a full safety certification process before it could be deemed street legal in the United States. However, the DB7 Zagato’s limited production rendered any crash testing impractical.

With the goal of accommodating American drivers, Bez and Zagato turned their attention to creating a prototype specifically for the North American market. Thus was born the Aston Martin DB American Roadster 1, or DB AR1 for short. The $245,000 prototype debuted at the Greater Los Angeles Auto Show in January, and its production run of 99 was presold by March. The stunning two-seater is a piece of rolling sculpture that appears different from any car on the road today—just as Andrea Zagato intended. “I prefer cars to have a bold, distinctive design,” he says.

While other coachbuilders have made Aston Martins that are sportier and more exclusive than their production counterparts (Ghia, Bertone, and Touring, for example), none is linked to the carmaker like Zagato is. Each time Aston Martin and Zagato have collaborated, they have produced a landmark vehicle.

The first was the aforementioned DB4 Zagato, which is widely recognized as the greatest street Aston and has been described by Bez as “one of the most beautiful Aston Martins ever created.” Only 19 DB4 Zagatos were built during the two-year production run, and in today’s collector car market, one can fetch more than $2 million. The DB4 Zagato’s beautiful, aggressive aerodynamic body clearly alluded to its performance pretenses, which were confirmed by its 314-hp engine. The interior was comfortable yet stark, a reflection of the weight-saving measures that helped the DB4 Zagato easily exceed 150 mph.

The next Aston Martin Zagato did not appear until the mid-1980s, when a new top-speed war was declared among the world’s most prestigious manufacturers. Not content to remain a spectator behind the battle lines, Aston Martin’s dynamic CEO Victor Gauntlett and fellow Aston shareholder Peter Livanos met with Zagato chief Gianni Zagato, the son of company founder Ugo Zagato and the uncle of Andrea, at the 1984 Geneva Motor Show. At Geneva the following year, Aston Martin unveiled a series of sketches for a new limited-production model that it claimed would be able to accelerate from zero to 60 mph in under five seconds and reach 186 mph—a speed that would make it the world’s fastest production car.

The project followed the DB4 Zagato’s successful formula by installing an engine that was more powerful (listed at 432 hp) than the production version’s and removing as much weight as possible (almost 400 pounds). The Vantage Zagato debuted at the 1986 Geneva show, and the entire production run of 50 vehicles was instantly sold out.

This response led Aston Martin to commission a second, open-air version, the Volante Zagato, which debuted at Geneva in 1987 and became one of the stars of the show. Like the Vantage Zagato, the Volante Zagato represented the visions of Gianni Zagato and Zagato chief stylist Giuseppe Mittino. They derived the clean, aerodynamic form from its enclosed counterpart, yet the Volante Zagato was more oriented toward luxury than raw speed. Only 25 were made, and all were sold immediately.

The relationship between Aston Martin and Zagato began in 1960, when the English automaker and the Italian coachbuilder collaborated on the DB4 Zagato. With a 314-hp engine and a stripped-down interior, the DB4 could reach a top speed of 150 mph.

Allusions to these past collaborations are evident in the design of the American Roadster, on which Andrea Zagato and his chief designer, Nori Harada, worked closely with Aston’s design head, Henrik Fisker. The large yet discreet grille carries over from the DB4 Zagato and the DB7 Zagato, and the lovely, swooping buttresses behind the seats pay homage to the classic double-bubble roofline found on many of Zagato’s most famous models.

As with other Aston Martin Zagato models, the Roadster’s performance is formidable. The DB AR1’s dohc 6-liter V-12 has been massaged to produce 435 hp and 410 ft lbs of torque (compared with the standard Vantage Volante’s 420 hp and 400 ft lbs of torque). The drivetrain has a revised final drive ratio to provide superior midrange performance.

Other modifications include a sport exhaust system with rear muffler bypass valves borrowed from the Vanquish. An AP Racing twin-plate clutch replaces the standard Vantage Volante’s single plate, and the gear lever has been revised for even quicker shifts.

Perhaps the most impressive feature about the American Roadster 1 is that the project progressed from concept to running prototype in less than four months. “Aston Martin is unique in its ability to react quickly to market moods and produce limited edition sports cars like the DB7 Zagato,” says Bez. “Production of the DB AR1 is dependent entirely on customer interest.”

But then, the doctor could add, the pairing of the Aston Martin and Zagato names all but guarantees customer interest.

Zagato: Flying Right From the Start

Having designed and constructed airplanes for Italy during World War I, Zagato Carrozzeria founder Ugo Zagato understood the benefits of aerodynamic, lightweight forms. In 1919, at the age of 29, Zagato began applying those principles to automobile chassis when he opened his namesake company in Milan. Six years later, in 1925, Zagato produced a lightweight body for Alfa Romeo’s 6C 1500 Spider chassis, and a legend was born.

Zagato-bodied Alfa Romeos dominated endurance competition in the late 1920s and early 1930s. The cars were regarded highly enough for Benito Mussolini to own one, which he drove on the street and the racetrack. Soon Lancia, Rolls-Royce, Bugatti, and Isotta Fraschini were among the manufacturers offering elegant, lightweight Zagato coachwork.

After World War II, in its new factory on the outskirts of Milan, Zagato began experimenting with bold new designs on cars for Fiat, MG, Ferrari, and Maserati. Zagato also produced a number of open two-seat racecars, including the Testadoro, the Siluro, and the Marinella. As the racetrack victories accumulated, the Za gato name became synonymous with lightweight, wind- cheating design. The shapes were simple and elegant and frequently won awards on the concours d’elegance circuit, but Zagatos remained best known for their speed.

During the 1950s and 1960s, Ugo Zagato’s eldest son, Elio, an accomplished driver who had won five Italian driving championships, assumed a more prominent role in the company’s operations and further solidified Zagato’s association with high-performance vehicles. “Racing definitely helped sell our cars,” Elio remembers. “People would see the results of the race and would frequently read the Zagato name. Often, someone would approach me after a race was over and say, ‘I want to buy your car.’ ”

In 1962, Zagato moved into a new facility outside Milan. It was here that Ugo, along with Elio and younger brother Gianni, worked closely with the company’s new chief stylist, Ercole Spada, to create a number of Zagato classics, including the Aston Martin DB4 Zagato, Alfa Romeo’s TZ1 and TZ2, and the Lancia Flaminia Sport Zagato. In the 1980s, with Gianni running the company, Zagato collaborated with Aston Martin on the Vantage Zagato and Volante Zagato, two cars that quickly sold out their limited production runs.

Today Zagato is prospering under the leadership of Elio’s son Andrea. His prototypes include the spectacular Lamborghini Raptor and L147 of the mid-1990s. The firm also won the most recent Compasso d’Oro, a prestigious award for outstanding industrial design.

“Looking back over our history, 1960 to 1970 was our best period,” says Andrea. “Our designs were creative, the company expanded enormously, and our production was quite strong. It was a very profitable and a very satisfying decade for us. Now, 40 years later, I feel as though we’re on the threshold of a dynamic decade, one that will rival what we accomplished in the 1960s.”

When wealthy auto enthusiast Lionel Martin and engineer Robert Bamford built their first Aston-Martin in 1914, they could not have realized that it was the genesis of a company that would become synonymous with prestige, beautiful design, performance, and a character called James Bond. (The name originally included a hyphen, and Aston refers to the Aston Clinton hill climb course where they test-drove the car, or it’s a name that Martin’s wife came up with so that the company could be at the front of any alphabetical listings.) Martin and Bamford also could not have foreseen the financial difficulties that the company would experience while creating such coveted machines.

Aston-Martin officially formed in 1922 and was bankrupt by 1925, when William Renwick and engineer Augustus Bertelli purchased the company. The new incarnation of Aston Martin operated without the hyphen and without Martin or Bamford. While Aston Martin produced an impressive string of exclusive sports cars and speedy racecars, financial success continued to elude the company.

Following World War II, Aston Martin was purchased by tractor manufacturer David Brown, the DB to whom nearly every postwar Aston Martin model name pays homage. The DB1 that appeared in 1948 was followed by 1950’s DB2. It featured a fastback body derived from the company’s Le Mans special and was powered by a 2.5-liter twin-cam 6-cylinder engine. The DB2 inaugurated an incredible run of sports cars and luxurious GTs that vaulted Aston Martin onto the automotive world’s center stage.

Aston also assaulted the track with a DB3S that placed second at Le Mans in 1955, ’56, and ’58. The DBR1 swept the top two places at Le Mans in 1959, its debut year, helping Aston Martin win the World Sports Car Championship.

In 1958, Aston Martin introduced the seminal DB4 street car. Propelled by a 3.7-liter engine and dubbed by the company “the ultimate symbol of success,” the DB4 could reach a top speed of 140 mph. It was followed by the more powerful Vantage, the short-wheelbase GT, the top-performing DB4 Zagato, and the DB5, whose elegant lines, covered headlights, and starring role in Goldfinger made Aston a household word.

Despite its growing popularity among the masses and its long-standing cachet among auto connoisseurs, Aston Martin was losing close to £1 million a year by Brown’s own estimate during his ownership. Finally, in 1972, three years after Sir David was knighted for his contributions to the auto industry, Brown sold the company and all of its debt for £1. This began an eight-year period in which the company passed through the hands of several owners (even closing temporarily in 1974) before a group of investors led by Pace Petroleum Chairman Victor Gauntlett purchased it in 1980. Gauntlett’s group preserved it from bankruptcy until Ford Motor Co. bought 75 percent of the firm in 1987.

The sleek DB7 of the mid-1990s suggested a bright future under the direction of Ford, which purchased the remaining 25 percent of the company in 1994. Now, with the release of the DB American Roadster 1, which was preceded by the 1999 releases of the V12 Vantage and Volante and 2001’s Vanquish, one of the stars of James Bond’s Die Another Day, Aston Martin appears to be back on the A-list.