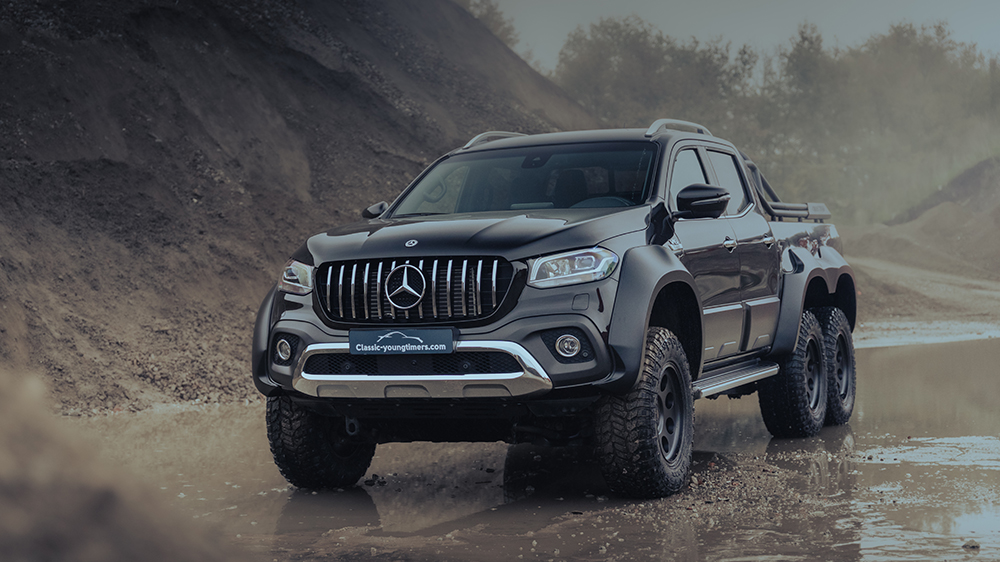 The G-Wagen isn’t the only option for Mercedes-Benz lovers looking to off-road in style.

Classic Youngtimers Consultancy has just unveiled an insane six-wheel version of the German marque’s X 350d “Black Edition” truck. With a host of modifications it’s likely one of the gnarliest Mercedes you’ll lay eyes on.

You’d be forgiven for not knowing that the German automaker has a pickup truck in its lineup. The X-Class was introduced in 2017 and only released in Australia, New Zealand and parts of Europe, Africa and Latin America. It never quite managed to catch on, and the brand pulled the plug on it last year.

Nevertheless, Classic Youngtimers Consultancy saw a vehicle it could have some fun with. Taking inspiration from the ultra-rare G63 AMG 6×6, the exotic car dealership dramatically extended the body of the truck and added a third set of wheels. That alone would’ve turned this X-class into something different, but the shop had more in store. The pickup was also equipped it with a Mercedes-Benz GTR grille, cartoonish fender flares, door protectors, custom alloy rims and a menacing gloss black. Most intriguing of all, though, is a detachable truck bed and its custom roll-bars. The ability to remove it would, in theory, allow you to turn this truck into a behemoth camper.

It looks like the dealership has limited its modifications to the body of the vehicle,\ in an attempt to make it a tad more practical that the over-the-top G-Wagen 6×6. That means you’ll find a 3.0-liter turbo V-6 diesel engine under the hood. Mated to a seven-speed automatic transmission, the burly mill can generate 255 hp and 406 ft lbs of torque. It’s not a supertruck—it needs about 750 more horses to qualify—but it will have some serious grunt. A video accompanying its announcement shows that, at the very least, it’ll look cool ripping donuts in the mud.

Anyone interested in adding the modified 6×6 to their garage would be wise to contact Classic Youngtimers sooner rather than later. The dealership has made clear that this “Black Edition” will be a one-of-a-kind. As for cost, the $129,000 price tag is no small investment, but it’s also half as much as its inspiration. And hey, it’s a Mercedes.