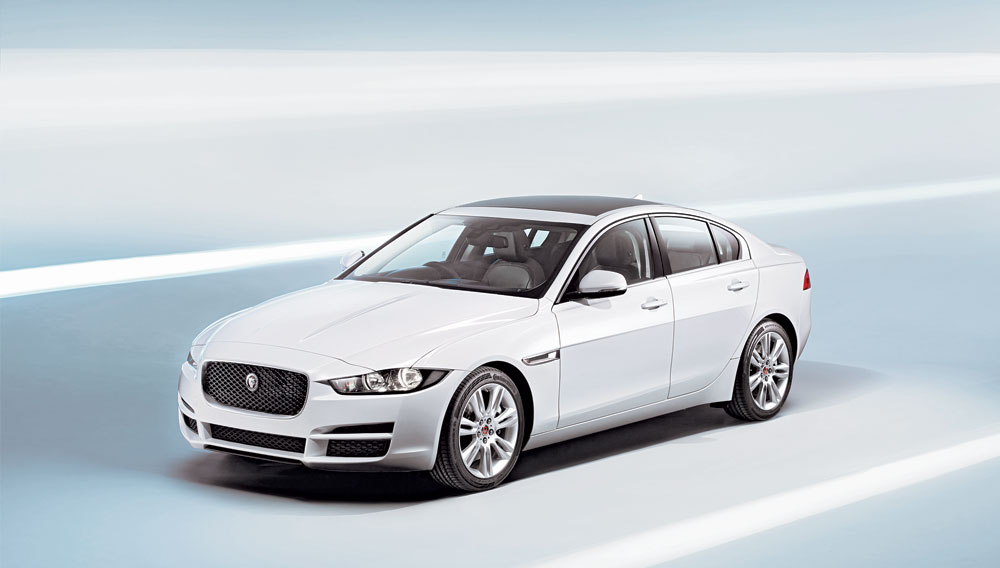 Though the XE will be Jaguar’s smallest model, it figures big in the company’s plans.

With the recently revealed XE, a lightly down-priced and downsized sedan, Jaguar will attempt to make up for lost time and gain ground that it has been surrendering since the 1970s to BMW’s spirited 3 Series and also, in more recent years, to Audi’s elegant A4 and the stolid Mercedes-Benz C-Class.

The XE will not arrive in U.S. showrooms until 2016, so the marketing and production plans for this junior Jag remain fluid. One variant that should reach this country will be equipped with a 335 hp supercharged V-6 that is similar to the engine powering Jaguar’s mid-level XF sedan. Paired with an 8-speed automatic transmission, the engine is expected to enable a zero-to-60-mph time of 4.9 seconds and an electronically limited top speed of 155 mph.

Pricing for the XE, says a Jaguar spokesperson, will start “in the high $30,000s,” which would be in line with the prices of the car’s German competitors. There is talk of a coupe, a convertible, and an estate car, and there is the strong possibility that Jaguar will offer a high-performance variant with a 5-liter V-8.

“The XE will attract new followers to the brand,” says Nick Miller, Jaguar’s vehicle program director for the XE, “and it is one of the most important cars in the history of the company.” Miller is referring to the XE’s role in the grand plans by Jaguar and its corporate cousin, Land Rover, to become one of the world’s largest builders of luxury vehicles. Industry analysts and company insiders say Jaguar intends to increase annual sales from 60,000 cars last year to more than 250,000 by the end of this decade.

Jaguar is no newbie when it comes to building a midsize sedan. In 2000, while owned by Ford, it introduced the S-Type. About two years later, the X-Type arrived. Both were criticized heavily by purists. The S-Type was scorned for being a Jaguar shell built on a Lincoln LS platform, and the X-Type is doomed to be remembered as a rebadged Ford Mondeo.

Happily and certainly wisely for Jaguar, which has been owned by India’s Tata Motors since 2008, the XE is sparkling new from the ground up and from end to end, and it is all-Jaguar in terms of looks, luxury, and build quality. The exterior bears a family resemblance to the flagship Jaguar XJ and the slightly smaller XF. It has an oversize wire mesh grille, yawning front air intakes, exquisitely proportioned length and height, a long bonnet, and a bobbed, saucily rounded boot.

“We’ve got the foundation of the brand in place,” said Jaguar design director Ian Callum in discussing the XE at the Geneva International Motor Show in March. Fortunately, he noted, Jaguar’s greatest asset, a nearly 80-year legacy of gorgeous looks and driving brilliance, remains intact.  “But we can’t continue at the [limited] volume we’ve got. We need to reach a mass of people.”