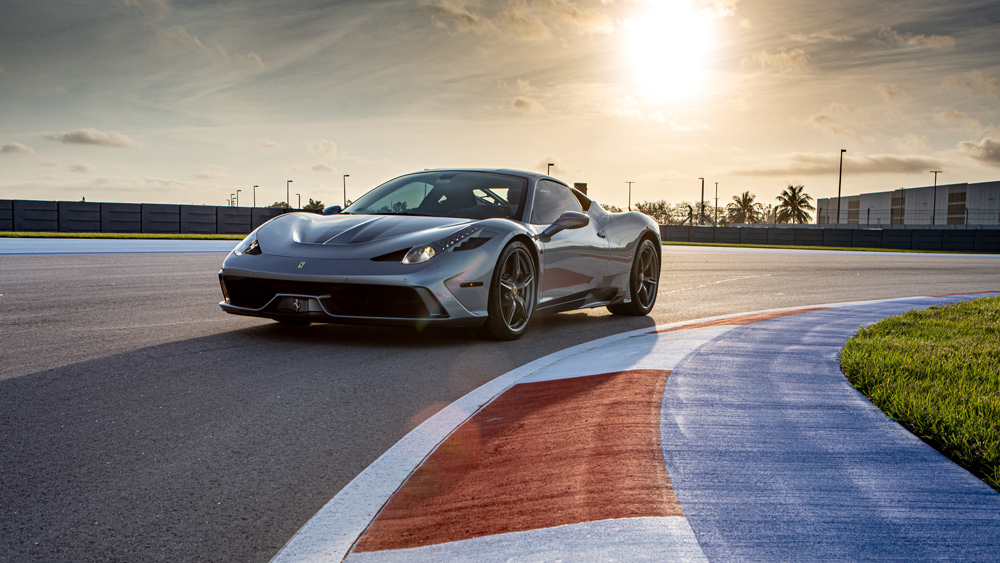 Photo: Courtesy of the Concours Club.

My eyes are fixed on the fast-approaching distance markers at the end of the 2,100-foot straightaway, my foot ready to take action the moment I get the signal in my headset—but there’s silence. Past the second marker, finally, a calm command: “Brake.” The BMW M2 CS race car responds like a thoroughbred with its reigns pulled hard, immediately scrubbing speed to navigate the ensuing double apex and trace the ideal line through a pair of deceptively challenging corners aptly named “Frustration and Temptation.”

Pulling into pit lane after just a few laps at the Concours Club in Opa Locka, Fla., I’m approached by Rod MacLeod, the voice that’s been guiding me remotely. The former Formula 3 champion—and one-time mechanic for the late racing icon Ayrton Senna—is precise in his analysis: “Brake later and harder.”

That simple instruction shaves copious time off subsequent laps, with confidence in both the machine and myself growing exponentially. It’s something the exclusive list of members experience daily at this 80-acre motorsport haven, fast becoming a frontrunner in the private-racetrack field. The level of coaching, the hi-tech circuit (including the latest safety features) and top-tier dining and amenities are what helped the Concours Club stand out as the chosen venue for the East Coast segment of Robb Report’s Car of Year contest, with drive days taking place December 1 through 5.

For Concours Club founder Neil Gehani, a commercial real estate developer and entrepreneur, the plan to develop his motorsport concept was driven by passion. “I loved cars growing up, but never had a family that could afford buying sports cars or being immersed in car culture,” says Gehani. “When I had my first success in business, the first thing I did was go to a Porsche dealership and buy a beautiful 911,” he says, adding that “the general manager of that dealership was a gentleman racer and started a driving series at the Autobahn Country Club in Joliet, Ill. I had this embedded addiction to cars, and he basically just poured fuel on the fire. When I got to Miami, my wife looked me in the eyes, and asked what I was thinking,” Gehani’s response: “I’m going to build an auto country club in Miami—it has to happen down here.”

The circuit can be presented in over seven different configurations.  Photo: Courtesy of the Concours Club.

While such private courses are becoming more common Stateside, few, if any, provide the caliber of testing ground on offer here. “This is the only racetrack club I’ve joined,” says Hélio Castroneves, four-time Indy 500 champion and founding member of the Concours Club, in a conversation with Robb Report back in 2019. “I joke sometimes that IndyCar should learn from this course because it has a lot of challenges but is 40 feet wide and has many built-in safety aspects, so it’s good for all experience levels.”

The more than 2-mile circuit, which can transform into over seven different track configurations, is a benchmark in design and measurement of performance metrics. While many members bring their own machines or keep them in an on-site facility tended to by a team of specialists, the club maintains a fleet of race cars at the ready, including the aforementioned BMW M2 CS. All course monitoring is done by electronic marshals via closed-circuit cameras and state-of-the art data processing. But what truly stands out is the world-class mentoring.

“Some of the most fantastic experiences I’ve had here at this club are with people that almost needed to be shoehorned in the car; they were not interested in driving,” admits MacLeod, who counts Formula 1 star Sergio “Checo” Pérez as a protégé. “Then you see the smile on their face after 10 laps working with them and, now, you can’t get them out of the car. That’s really what I live and work for.”

Concours Club fixtures like MacLeod and Castroneves aren’t the only magnets to membership, however. A lynchpin of the 28,000-square-foot complex is Verge, the dining enclave helmed by renowned chef Brad Kilgore, previously with three-Michelin-starred restaurant Alinea, in Chicago, along with master sommelier Dan Pilkey.

“We want to be seen as a team of private chefs,” says Kilgore of his teams’ relationship to members. “We’re logging all their preferences, not only dietary restrictions, but likes and dislikes.” Asked to define his own culinary style, he says he’s “been trying to put it into words for some time, and it’s really ‘food with no borders.’ I’ve always been a guy that breaks the rules.”

Chef Brad Kilgore in a rare moment of rest.  Photo: Courtesy of the Concours Club.

The menu offerings range from a heart of palm salad with lemongrass, ginger, cardamom and habanero to pizza featuring a crust made from sourdough starter that’s more than 50 years old. Then there’s the staples: “I’ve been told my burger was worth landing a plane for, so we call it the ‘$10,000 burger,’” says Kilgore. “That’s my job, right there.”

Confectionary artisanship on display at Verge.  Photo: Courtesy of the Concours Club.

Unlike other membership-driven racetracks, the Concours Club—which owes its overall aesthetic to DMAC Architecture—doesn’t offer a residential component, but will be developing Auto Lofts; basically, these will be condos for your car that are also suitable for entertaining. And a soon-to-be-built event structure, designed by Pininfarina, will lure corporate entities looking for a unique place to host.

The Verge lounge.  Photo: Courtesy of the Concours Club.

But all of the lavish touches are mere garnish for the raison d’être of membership: driving on a closed course with the freedom to, as MacLeod put it, brake later and harder than one’s comfort level would normally allow. For the next few days, a cadre from Robb Report’s own membership club, RR1, will do just that as they test a field of the world’s top production models and proffer their ballots for the 19th edition of our Car of the Year contest. Regardless of each judge’s respective choice for ultimate honors, the highlight of the day will likely come from the passenger seat as Hélio gives hot laps. He has my vote, at least.