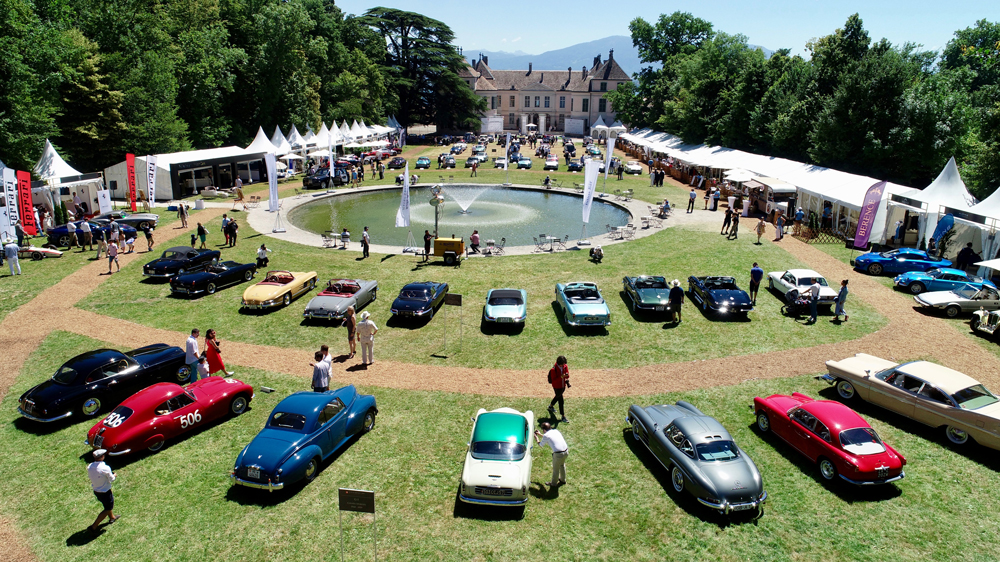 The fourth annual Concours d’Elegance Suisse takes place June 21 through 23 at the Chateau de Coppet, less than 10 miles outside Geneva. It’s an appropriate setting for an event with “elegance” in its name—the lovely chateau and its graceful grounds were home to the great lady of letters, Madame de Stael.

“It’s important to celebrate the authenticity and originality of the cars,” said the event’s co-founder Mathias Doutreleau, who also launched the Quail, a Motorsport Gathering in Carmel, Calif., in 2003 and ran it until 2008. There will be 89 cars in 17 classes to assess. One of the rarest is the 1934 Bugatti Type 59 Grand Prix. “This car is the first chassis of the four factory works cars built for the 1934 racing season,” says Doutreleau. “It placed third in the 1934 Monaco Grand Prix with driver Robert Benoist.”

The 1934 Bugatti Type 59 Grand Prix that will be on display.  Photo: Courtesy of Concours d’Elegance Suisse.

The Concours will also celebrate a bunch of birthdays—the 125th anniversary of the Delahaye, the 110th of the Bugatti, the 100th of the Citroen and the 60th of the Mini.  To mark the occasion, 8 to 10 premiere examples of each brand will be on display. The centenary of the Bentley, for instance, will be celebrated by cars owned by Mr. Woolf Barnato, who eventually acquired the British marque. One stunning example is the 1931 Bentley 8 Litre Open Tourer Vanden Plas, his personal car and the one he used for his wedding.

This year there will be a new award, the Best of Sound. It’s “for the car with the most pleasurable engine sound,” explains Doutreleau. It’s given in collaboration with BOSE Corporation and Glastonbury, Inc. “As we are advancing towards ‘mute’ automobiles [with electric engines], we felt the need to record, preserve and honor the great engine sounds of the world’s best automobiles for future generations.”

In total, 41 awards will be handed out to participants from across Europe and the United States. One of last year’s winners, Dr. Christian Jenny, is returning with a few examples from his renowned collection of Jaguars. Last year his 1961 Jaguar Type-E (car of the 1961 Geneva International Motor Show) won first prize in the category of Front-Engined Sport Coupes 1960-1975; this year he’s bringing his 1935 S.S. Prototype. Jenny has been a participant in the world’s biggest car events, so why this boutique Concours? He sums it up in one word: “excellence.”