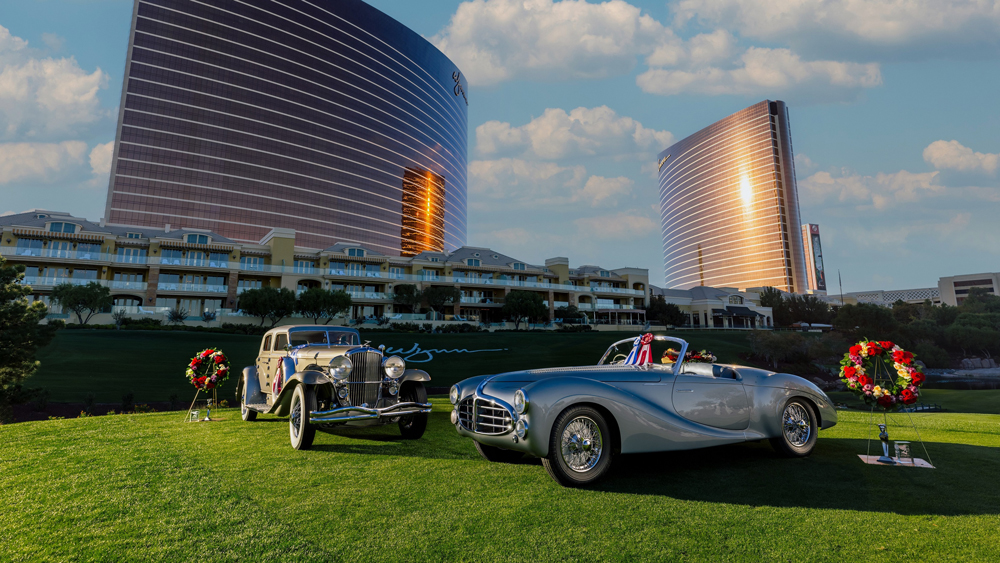 Like a struggling sports franchise that lands a coach who truly believes in its full potential, a fledgling car show in Sin City has found its catalyst to greatness by teaming with one of the regions most renowned hotels. The result is the Concours d’Elegance Wynn Las Vegas, which debuted on Saturday, October 29. For anyone in attendance, it was clear that there was now another player that could eventually compete with the likes of Pebble Beach as an annual epicenter for car culture.

“You’re very fortunate, because the crowd will never be this small again,” said Grand Marshall Jay Leno to those assembled at the entrance moments prior to sparklers and streamers commencing the contest. “This is a world-class event at a world-class resort, I mean, this is doing it right. Hey, it’s Vegas—you’re not going to get this at the Walmart Cars & Coffee.”

Gracing the final fairways of the Wynn Golf Club, 230 show vehicles were grouped in 15 classes, from Antiques thru 1924 to Supercars: 1967-2012. Also in the mix were various prewar and postwar sports car and racing categories, a division devoted to important Japanese cars and classes specific to Cadillac, Corvette and Shelby variants.

“With Shelby being in Las Vegas, it’s great having something like this in our backyard—we were excited to participate this year,” says Aaron Shelby, grandson to the late automotive icon Carroll Shelby. “It’s fun to see the Cobras and 427s, but it’s also really neat to see some of the unique cars that have come out,” says Shelby of the mobile history that wears his family’s name. Among them was a 1964 Shelby 289 Cobra that was made even more significant by the fact that it was both the final example built and was owned by Carroll himself.

Also catching the eye was a 1967 Shelby Cobra 427 owned by Marvin and Shelley Smith. “This is the street Cobra, it hasn’t been fettered or fussed with,” says Marvin. “It’s numbers-matching and didn’t have an accident, so that was the big deal for me . . .. and I do drive it.”

Motorsport was well represented in an all-encompassing racing segment that focused on cars campaigned from the early 1960s to 1990s, such as Bill Pope’s 1960 Maserati Tipo 61 “Birdcage” featuring a mere 81-pound spaceframe chassis and the distinction that only two more examples were made after it. Then there was Tony Hart’s 1966 Lola T70, a Can Am racer in period and a winning concours car, named best in class at the Quail in 2018 and taking third in class at the Wynn.

Two outliers in the aforementioned field were stunning continuation cars from Jaguar Classic, a 1953 Jaguar C-Type—the first example of the C-Type to be built by the automaker in nearly 70 years—and a 1955 Jaguar D-Type. These period-correct clones, owned by local resident Joel Laub, resurrect a true automotive power couple as both bygone models were responsible for five overall victories at the 24 hours of Le Mans from 1951 through 1957.

“I owned an original C-Type and D-Type, which I raced, rallied and subsequently sold,” says Laub. “These cars are probably higher quality because they [Jaguar] had more time to build them,” says Laub when asked how the new doppelgängers compare. “Back then, they had to rush the cars to get them ready to race.” Pointing to the redux D-Type, Laub adds, “you can drive this one from here to New York.”

Not to be left out, Leno drew from his own renowned collection to bring a 1968 Bronco originally “gifted” to him in disrepair as a gag from fellow entertainer and late-night host Craig Ferguson. For Leno, restoration also meant giving it an engine from a Shelby GT500. “It’s got a short wheelbase and 800 hp—it’s the more-money-than-brains club” Leno told attendees. “I’m glad I didn’t have this when I was 16, because I would be dead now.”

As diverse as the field was, the team of judges used the same overarching criteria in evaluating cars across categories. “In any class, we look for originality and preservation,” chief judge Gary Bobileff told Robb Report. “The whole objective is to preserve the car when it comes to the shape, the body, what it should represent.”

The owner of eponymous restoration house Bobileff Motorcar Company, the veteran judge cites his own work on concours-quality vehicles as an example. “For a lot of the Italian cars—Ferrari, Lamborghini, Maserati—you can’t buy original exhaust systems, so you put on stainless-steel systems that last forever; the mild-steel ones rot out in no time. But the stainless ones sound completely different and take away half the fun of the car. We make an exact duplicate of the original exhaust systems that are guaranteed to rust out in 10 years, but that’s part of it. You try to keep everything the same, you don’t improve it.”

At the end of the day, a 1933 Duesenberg “20 Grand” and a 1951 Delahaye 235 epitomized these qualities to the judges, who named each Best of Show for the Prewar and Postwar classes, respectively. The Duesenberg “20 Grand,” named for its asking price so egregiously out of touch for the time, was the exact one presented at the Chicago World’s Fair that year and is now in the Nethercutt Collection. Peter and Merle Mullin’s Delahaye roadster, on the other hand, seems more in tune with its era of optimism and glamour—the automotive manifestation of Hollywood’s golden age.

Complementing the competitors, an exhibition of the industry’s latest and greatest included hypercars from Bugatti, Czinger and Koenigsegg, the current line of supercars from McLaren and luxury models from Bentley and Rolls-Royce.

Of that impressive roll call, perhaps Rolls-Royce looked most at home on the grounds of the Wynn due to a collaboration that dates back decades between the legacy automaker and the hospitality provider who happens to be one of its biggest customers. Currently, there are 30 Rolls-Royce Phantoms that comprise Wynn’s combined fleet between resorts in Macau and Las Vegas, the latter having 10 with another five soon to be delivered.

The model’s presence was also prominent on the show lawn. “We are using this opportunity to showcase the Phantom Series II,” says Martin Fritsches, president and CEO of Rolls-Royce Motor Cars Americas. Of the Goodwood-based marque’s relationship with the hotelier, Fritsches says, “It started out as a partnership but turned into a friendship, and it is simply growing.” When asked whether the recently debuted Spectre, the brand’s first foray into electrification, could be expected at the concours next year, Fritsches was confident if noncommittal, saying only that “the chances are very, very high.”

The weekend culminated with Sunday morning’s Tour d’Elegance that had many of the entrants cruising the Las Vegas Strip with police escort and Leno leading the pack. Surprisingly, there were more than a few spectators on hand despite the relatively early start in a town synonymous with 24-hour night life. But then support has been shown throughout the process of bringing this concours to fruition.

“We just started working on this six months ago and we’ve had so much help from the exhibitors and museums, it couldn’t be a more supportive community and we’re humbled by that,” says Brian Gullbrants, president of Wynn Las Vegas. “Everyone is telling us we have the opportunity to evolve this into something quite mightier. We are forming an advisory committee because we want experts in the industry guiding us to make sure this is the ultimate automotive show on the planet.”

That same goal drives Stuart Sobek, founder and chairman of the event. “The partnership with Wynn and this Concours d’Elegance is a magical thing to come together,” says Sobek, who marvels at how the feat was pulled off so well in such a truncated timeframe.  “We now have a full year to do the next show, and it’s going to be stellar.”

Sobek, Gullbrants and a Wynn team that’s 12,000 strong are certainly on track, considering that the 2023 edition is scheduled the week before the inaugural Formula 1 Las Vegas Grand Prix. Cars, it seems, have become the city’s new vehicle for tourism—as if it needed one.

The Best of Show winners from the 2022 Concours d’Elegance Wynn Las Vegas.