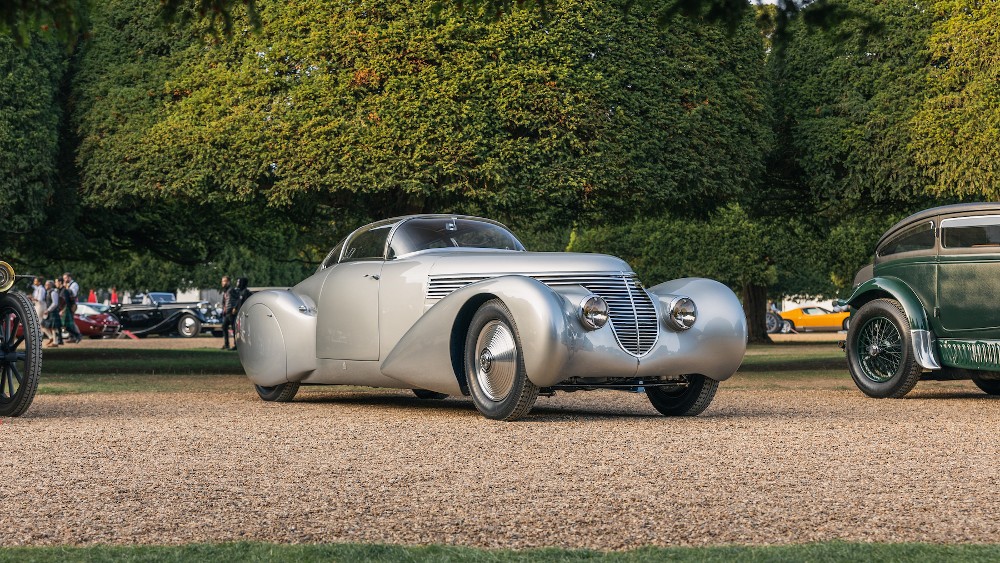 Nothing sets tone like a sense of place, and the world’s top car concourses are all about the milieu—Villa d’Este’s classic Italianate lakefront enclave, Pebble Beach’s craggy California coast, Chantilly Arts & Elégance’s aristocratic French garden. And then there’s the Concours of Elegance at Hampton Court, a destination as properly grandiose as King Henry VIII’s 16th-century castle upon which it resides.

Title sponsored by A. Lange & Söhne, the competition arrays rows of classic and vintage cars across the pristine Great Fountain Garden, an orderly assemblage of shaped trees, a circular driveway that laps a reflective water feature, and the facade of Hampton Court Palace, the edifice that housed the legendarily large-appetited king.

Art Deco won big at the 2022 edition, with the elaborately sculpted 1938 Delage D8-120 S “de Villars” taking Best in Show, and the aeronautically themed 1938 Hispano-Suiza H6B Dubonnet Xenia returning after a 2016 win to nab the Bridge of Weir Design Award. The Delage was first sold new for $7,299 USD, making it one of the most expensive cars in the world at the time. It was first shown at the Concours de l’Auto de Printemps in 1938, where it won Best in Show. After trading hands several times, it won the European Classics section and Best in Show at Pebble Beach in 1996. The Hispano-Suiza was originally commissioned by André Dubonnet, heir to the Dubonnet aperitif fortune, and used the Xenia’s platform as a showcase for the patented four-wheel independent “hyperflex” suspension system he invented with help from engineer Antoine-Marie Chedru. Wearing a stunning body by Jacques Saoutchik, the sleek two-seater is owned by the Mullin Automotive Museum and is perhaps the ultimate expression of 1930s design optimism.

The sponsoring high-end watchmaker from Saxony is led by CEO Wilhelm Schmid, a self-professed gearhead whose minty Porsche 356 was parked casually near the brand’s hospitality tent. The watchmaker featured their 1815 Chronograph Hampton Court Edition flyback chronograph, an intricately detailed one-off timepiece which will be auctioned by Phillips in November 2022 at the Geneva Watch Auction XVI, with all proceeds benefiting the Prince’s Trust.