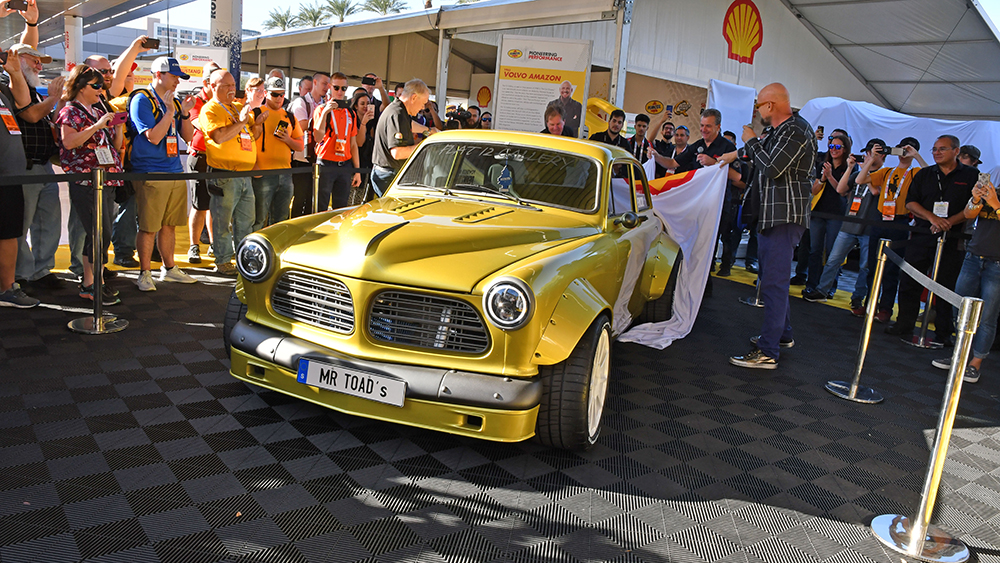 We’ve been getting teasers about the new Fast and the Furious spinoff flick, Hobbs and Shaw, starring Dwayne “The Rock” Johnson and Jason Statham. When the official trailer dropped awhile back, the most eye-popping moment was the two action stars drifting a McLaren 720S under a tractor trailer during a chase sequence in London. That trailer contains few glimpses of the rest of the four-wheeled stars from the film that hits theaters in August. However,  one-of-one Volvo and Corvette mashup will also grace the silver screen in the movie, according to Motorious.

The vehicle comes courtesy of Jeff Allen, a custom builder who also hosts The Car Chasers. Allen had always wanted to create something unique around a Chevrolet LS engine, and the ah-ha moment came when he found a Corvette Z06 parked next to a 1963 Volvo 122S Amazon and realized the wheelbases were rather similar. The build began as a bar napkin sketch, and all the parts used came from online or stores in a bid to show younger builders that anything’s feasible. The Z06 chassis ultimately wouldn’t fit with the Volvo body, so he switched to a 2013 Corvette Grand Sport, and made some trims and tweaks.

The Lingenfelter LS7 under the hood is packing 700 horsepower, which is a mite up from the Volvo’s original 85 horsepower. Allen knows his creation may ruffle some feathers of the respective Volvo and Corvette fanbases, but is non-plussed. “Love it or hate it, you’ll have some kind of emotion,” he said to The Classic Cars Journal when debuting the beauty at SEMA in 2018. There are a lot of ways the name for this Swedish-American combo could’ve gone (Volvette? Corvo?) but Allen ultimately settled on V06, which has a nice ring to it. Because it goes like a savage bat out of hell, per Allen, he’s nicknamed it Mr. Toad’s Wild Ride, and the license plate is a wink to that.

That plate is partially responsible for Motorious’s belief that the V06 will turn up in Hobbs and Shaw. A tipster pointed editors towards the social media account of a production member of the film, and there was the same car, with a “Hobbs Customs” sign lurking in the background. Here’s hoping the V06 makes the final cut, and that we see—and hear—it roar.