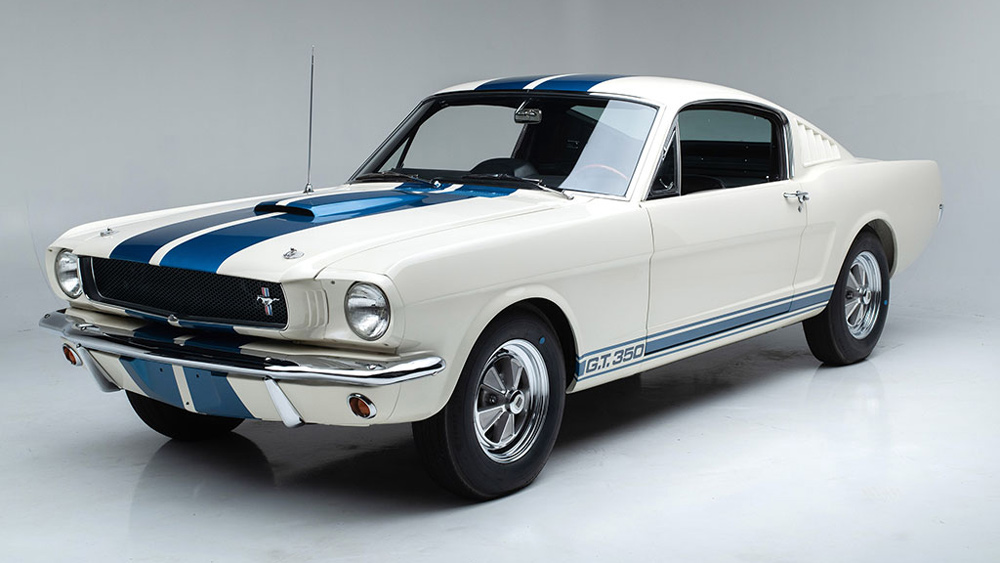 One of the most influential American muscle cars of all time, the Ford Mustang debuted in April of 1964 but was quickly given a boost in prominence by none other than Carroll Shelby and his brawnier Shelby GT350. Starting in 1965, Ford sent an allotment of Mustangs, based on the 1960 Ford Falcon platform, to Shelby’s facility in Southern California, where Carroll and his team gave the original “pony car” more power and performance while raising the car’s standing in the eyes of the performance-obsessed.

Only 562 examples of the 1965 Shelby GT350 were produced, so imagine coming across one today—and not just any model but one that’s in immaculate condition, maintains 99 percent of the original factory components and has only 19,000 miles on the odometer. That’s exactly what’s crossing the block at Barrett-Jackson’s Scottsdale sale, running March 20 through 27. Equally impressive is that the example, currently owned by the auction house’s co-founder Craig Jackson, is being offered without reserve.

Currently owned by Craig Jackson, chairman and CEO of Barrett-Jackson, this 1965 Shelby GT350 is one of the featured lots at the company’s upcoming Scottsdale Auction.  Photo: Barrett-Jackson Auction Company.

Jackson, a renowned Shelby collector, has strong ties to not just Carroll’s cars, but the man himself. “I knew Carroll since I was seven or eight years old, and when I got my first Cobra, I had him sign it,” say Jackson. “We did 100 of the Barrett-Jackson Shelbys . . . the lowest production run of Shelbys, and sold the first Shelby GT500 at Scottsdale for $600,000 for his foundation. Then we sold his personal Super Snake for $5.5 million, with him on the block. We held his 80th birthday party at the auction, so we’ve really been connected to Carroll for a long time.”

The car maintains 99 percent of the original factory components and has only 19,000 miles on the odometer.  Photo: Barrett-Jackson Auction Company.

Chassis No. 5S553, originally sent from Ford’s factory in San Jose, Calif., to Shelby American’s operation at Los Angeles International Airport, has undergone a painstaking restoration. At Shelby American it was given the GT350 treatment, a suite of enhancements that included the addition of a “high-riser” intake manifold and welded-tube headers for the engine, plus upgraded brakes and suspension.

After being used as a public-relations vehicle, it was sold by a SoCal dealership to a pair of brothers, one of whom used it to haul dirt bikes and damaged the idler arm during a road mishap. Repaired incorrectly, the car proved difficult to drive and sat unused (but protected) for decades, until a few Mustang experts, including John Brown of Thoroughbred Restorations and Barrett-Jackson’s own Jason Aker and Jeff Catlin, put the barn find on Jackson’s radar.

The all-original interior is one of the elements that make this GT350 so rare.  Photo: Barrett-Jackson Auction Company.

“We decided to restore it because the interior was perfect and it still had every single original Shelby part on it,” says Jackson. “Jeff came to me and said, ‘We can make the world’s best Shelby out of this car.’ The original carpet, the original seats; the whole car was just a time warp.”

Finished in Wimbledon White with blue Le Mans racing stripes, the GT350 being presented in Scottsdale represents 2,000 hours of labor, including reducing the vehicle to bare metal, a fully documented disassembly with all pieces restored, rebuilt or replaced with date-coded originals as needed. According to Jackson, some of the components are among “just a handful on the planet.” The concours-ready machine also has its original 306 hp small block V-8 and four-speed manual transmission.

This pristine GT350’s rarity and its meticulous restoration has garnered a trifecta of perfect scores that earned the car the enthusiast’s version of the Triple Crown: Gold in the Mustang Club of America (MCA) Thoroughbred Class, the Shelby American Automobile Club’s Premier Award plus the MCA’s Authenticity Award.

In fact, those accolades are a major reason why Jackson decided to part with his automotive unicorn. “Until last week, I had never driven the car,” he says. “I smoke the tires on almost every car I have. I drive my cars hard, the way they’re meant to be driven. But this one should go in a museum. It should be put in a glass case filled with argon and kept until the end of time.”