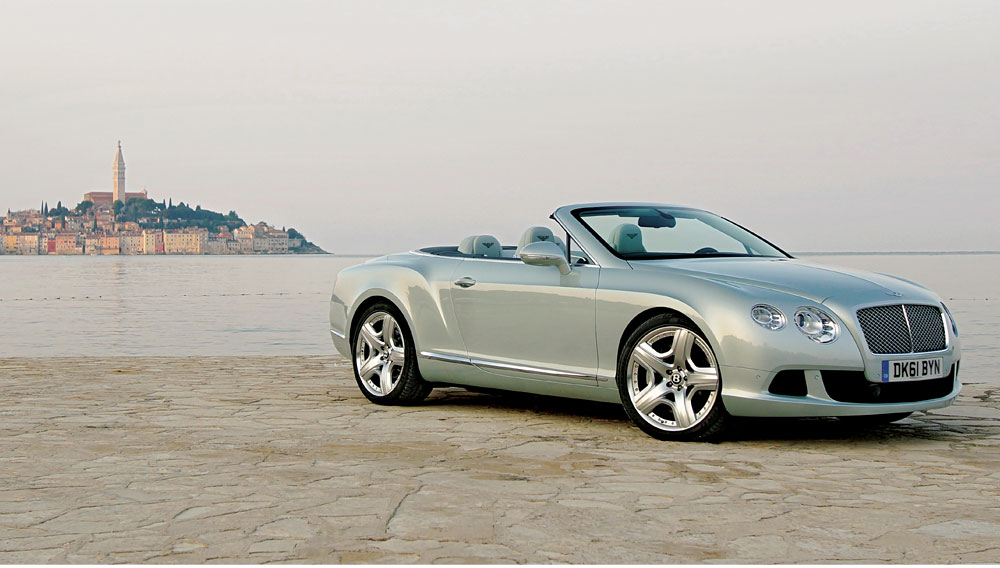 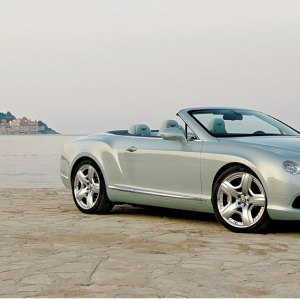 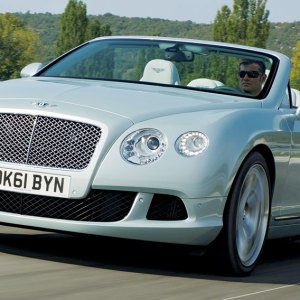 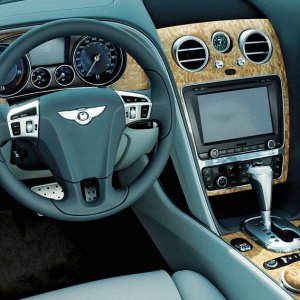 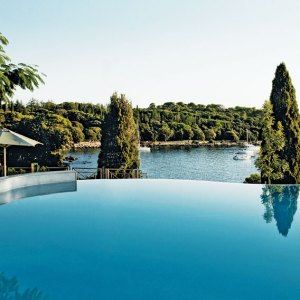 Our Bentley-hosted Croatian caper begins at the Hotel Monte Mulini, a 2-year-old structure of chrome, glass, and blond marble near the cobblestoned fishing village of Rovinj, on the Istrian Peninsula. A group of 2012 Continental GTCs—Grand Touring Convertibles—is assembled on the hotel’s portico under an undulant roof evidently inspired by the Adriatic Sea, to which the hotel property gently slopes.

It is mid-October but still warm enough for sunbathers to recline on the narrow beach at the base of the property and around the infinity-edge swimming pool on the hill above the beach. The weather also is pleasant enough for the Bentleys to have their lids down and their touchscreen satnav systems loaded for the peninsula’s attractions. These destinations form a charm bracelet of yellow-sand beaches, picturesque vineyards, and nearly pristine structures built by the Roman Empire.

Croatia has no Bentley dealerships and little heavy industry to speak of. But in this country of 4.5 million people that is several hours by car from Venice, tourism has become a $9 billion annual business that is growing yearly at a rate of about 5 percent. Although the number of Americans who visit Croatia is small—only 150,000 in 2010—it is swelling; Swift Air of Phoenix has had plans to add a nonstop summer route between Chicago and Zagreb, the country’s capital and largest city, to which billboards across Europe invite travelers to “dance until dawn.”

That enticement notwithstanding, even the worldliest travelers might hold a dim view of Croatia, seeing it as a darkled territory that, at various times over the last two millennia, has been conquered, broken apart, and plundered by its European neighbors. Most recently, in the 1990s, five years of war between Croats and Serbs—which began when Croatia declared its independence from Yugoslavia—created images of the western Balkans as killing fields where ethnic cleansing reached a level not seen since World War II.

Observers feared generations would pass before the hostility between Serbs and Croats subsided enough for the region to recover. But healing has come much sooner. Croatia, having gained its independence, has transitioned from a Communist dictatorship to parliamentary democracy; most of the war criminals and corrupt politicians from the 1990s are dead or in prison; the country is poised to join the European Union; it is a member of the United Nations and has a gross domestic product headed into positive territory for 2012; and from Zagreb to Dubrovnik, one has to look hard to find bullet holes.

Croatia’s climate is continental in the north and Med­iterranean along the coast, which means always warm and mostly sunny—hence the dropped tops on the Bentleys nearly a month into autumn. Croatian roads are new and sophisticated. They are broad where they cover long distances, and two-lane curls and corkscrews where they cross the mountains. And, most surprisingly, they are always smoother than the fur on a Dalmatian puppy (a breed that originates from the Dalmatia region of Croatia). The roads are well suited to wicked bursts of speed from 195 mph motorcars.

For these reasons, Bentley chose Croatia and its luscious Istrian Peninsula for the launch of the $212,000 second-generation Continental GTC.

When initially introduced, in 2003, the Continental was smaller, more powerful, more relevant, and not quite as expensive, compared to other Bentleys, yet it still embodied the engineering thoroughness and luxurious handcraftsmanship that are the company’s legacies.

The new Continental GTC is a sophisticated refinement of its first generation—not, thank God, some desperate remake. If it worked before, believes Bentley, it will function better in the future. Therefore the 2012 GTC receives more power than would ever be necessary, from a tried-and-true twin-turbo W-12 sourced from Volkswagen (which owns Bentley) and tuned by Bentley. The engine delivers an impressive 567 hp of tugboat muscle and 516 ft lbs of torque, which is about 15 more units of horsepower and 37 more of torque than the departing Continental.

Gentle refinements enhance a design that already was attractive, adding more character than the somewhat understated original displayed. Slightly longer length and wider track lend the car a flatter appearance. The silhouette looks smoother because the fenders and body panels are formed from single sheets of aluminum shaped by hyperheating and air pressure. The construction method eliminates visual intrusions from welds, seams, and shut lines. Both ends of the new car are blockier than those of the original and certainly more masculine-looking.

Delightful details include a little more rear legroom, a seven-bow retractable roof (because the old four-bow design tended to make the roof fabric look a little baggy and saggy), a cupholder moved farther to the front of the console, a removable sunglasses case sporting a Bentley badge and a wood grain that matches the car’s interior veneers, improvements to the massaging seats, a headrest draft dam that tames vortices and enables conversations when the car’s top is down, and a heating system cribbed from Mercedes that directs warm air to the necks of driver and passenger.

The top goes up or down in 25 seconds while the vehicle is traveling as fast as 20 mph. Other convertibles’ tops operate at swifter speeds, but when you are being coddled in a Bentley, what’s the hurry?

The first stop after departing the Monte Mulini and driving south toward the tip of the Istrian Peninsula is Pula, a city built by the Illyrians 3,000 years ago and acquired as a fixer-upper by the Romans eight centuries later. Pula’s main source of civic pride is its arena, the world’s sixth-largest and perhaps best-preserved Roman amphitheater. The contestants’ changing rooms remain in place, as do the caverns that held lions and Rottweilers before the animals met and tried to maul their gladiator foes in ancient Rome’s equivalent of Monday Night Football.

Riding to Pula in the Continental GTC is no sprint. The inbound road is a cluttered secondary route that negates performance travel. No matter: A driver can learn as much about a car by meandering as by cutting it loose. The Bentley, despite its huge horsepower, terrifying torque, and industrial-strength braking and suspension systems, treads lightly, like a pussycat in slippers. On a ride north from Pula into the mountains and then downhill to Istria’s east coast, the GTC is able to perform closer to its capabilities. With its 12 pistons sometimes chugging, sometimes—under serious power—making their characteristic whooshing sound, the Bentley is in its element. Bring on the sweepers. Hairpins ahead? Game on.

Shifting, whether manual by steering-wheel paddles or automatic, is barely noticeable. Better yet, whether the car is climbing a hill, descending one, or exiting a corner, a quick stab to the ZF gearbox always delivers the precise cog. It does not matter that the transmission has only six gears. With torque cutting in at only 1,700 rpm and remaining at its peak until 5,000 rpm, longer legs are not necessary.

Throughout the ride, the GTC offers the type of open-top motoring exhilaration that is unique to a Bentley. It is more than a matter of breezes on the face and oneness with the elements; those are the simple pleasures experienced in any mainstream convertible. In a Bentley, however, nothing distracts from the total adventure of alfresco pace: no loss of precision in the steering, no rattles or lurching, no flexing of frame, and no unexpected changes in road holding.

“We don’t have those compromises, so there are absolutely no trade-offs in the ride,” says Paul Jones, the youthful engineer who heads Bentley’s product management and is on hand for the Croatian drive. “Then there is the security of having that huge reserve of power. That alone gives the driver a sense of occasion. You sit in the car, it wraps all that comfort and quality around you, it begins to move, and you don’t have to wait long to enjoy.”

The ride to the 2,000-year-old mountaintop town of Motovun, in the center of Istria, certainly is enjoyable. The same cannot be said for the walk from the town parking lot, a steep trek across cobblestones that remain ankle breakers even though they have been smoothed by the sandals and sneakers of centuries. Yet it is worth the effort to reach the 33-room Hotel Kaštel, which occupies a 17th-century palace near the town’s highest point and overlooks the Mirna River valley and the vineyards of Motovun.

Of greater interest, to gastronomes at least, are the town’s surrounding forests, the roots of whose trees are rich with truffles. White and black truffles, whole truffles, truffle oil, truffle jams, and even truffle candies are readily available in restaurants and shops throughout Motovun. In 1999, one of the world’s largest white truffles—weighing almost three pounds—was sniffed out of a forest about 10 miles from the city.

Rocketing back to Rovinj along nearly empty freeways built for the far side of any speedometer, the GTC is not even close to becoming breathless. Taking the car to 120, 140, and then initiating a burst of speed normally reserved for starting and finish lines is not a demonstration of bravado nor a juvenile challenge for man or machine. It is simply a query of the car’s credentials.

Or maybe it is a nod to a certain native of Motovun. In 1940, twin boys Aldo and Mario were born to a farm administrator and his wife, Luigi and Rina Andretti.