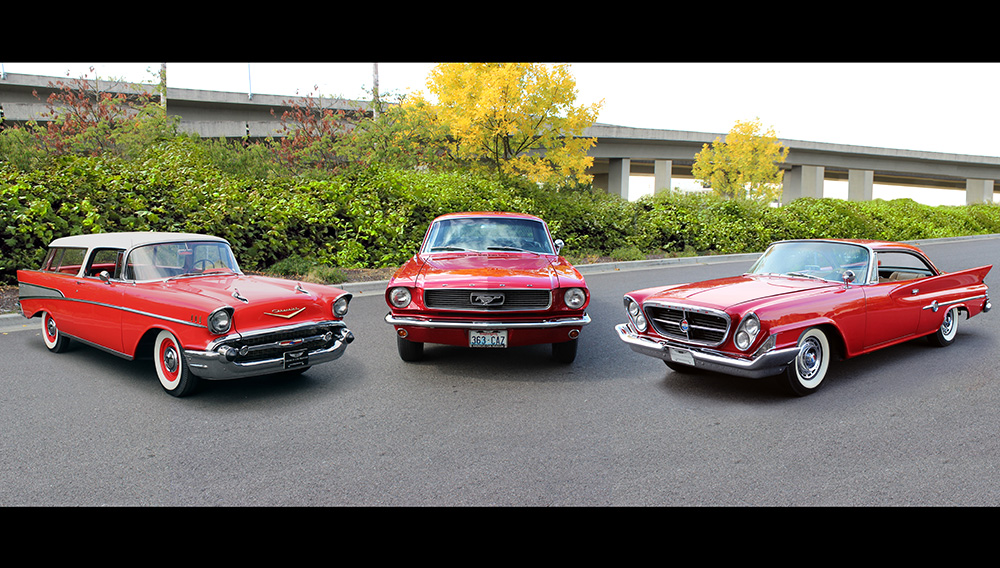 From December 27 through January 8, a convoy of three classic cars will be making the pilgrimage back to their point of production in Detroit, Mich., during the Drive Home rally—a collaboration between America’s Car Museum and the North American International Auto Show. An affirmation of America’s automobile industry, one vehicle from each of the “Big Three” manufacturers—General Motors, Chrysler, and Ford—will participate. Selected as iconic representatives for each brand are a 1957 Chevrolet Nomad, a 1961 Chrysler 300G, and a 1966 Ford Mustang, each dressed in the same eye-catching red raiment.

The 13-day, 2,400-mile migration begins at America’s Car Museum in Tacoma, Wash. Behind the wheel will be David Madeira, CEO of the museum; Keith Flickinger, owner of Precision Motor Cars in Allentown, Pa.; and William Hall, a writer and car collector from Milwaukee, Wis. Accompanying the crew will be a pace car, a repair truck and trailer, and volunteer Gregg Smith in his 2014 Dodge Challenger as support.

After publicity events in Portland and Bend, Ore., the motorcade will cover an average of 300 miles per day with planned overnight stays in Boise, Idaho; Salt Lake City, Utah; and Grand Junction and Lakewood, Colo. At the latter, the parade will park for a New Year’s Eve party at Club Auto Colorado. Next, it is on to Hays, Kans., and Kansas City and St. Louis, Miss. In Bloomfield, Ill., State Farm Insurance (the museum’s sponsor) will host a Homecoming Rally at its headquarters before the procession proceeds to Chicago, Ill.; Birmingham, Mich.; and its final destination, Detroit, where the three stars will proudly take a place of prominence in the auto show.

At each day’s stop along the way, gatherings with local clubs and connoisseurs have been organized, and members are invited to join in the journey with their own examples of automotive Americana. Unlike regular rallies, however, the Drive Home will take to the road in the height of winter as testament to the tenacious character of the cars themselves and the people who made them. Proceeds from the rally will go to the museum’s Hagerty Education Program established to prepare interested youth for careers in automobile restoration. (americascarmuseum.org)