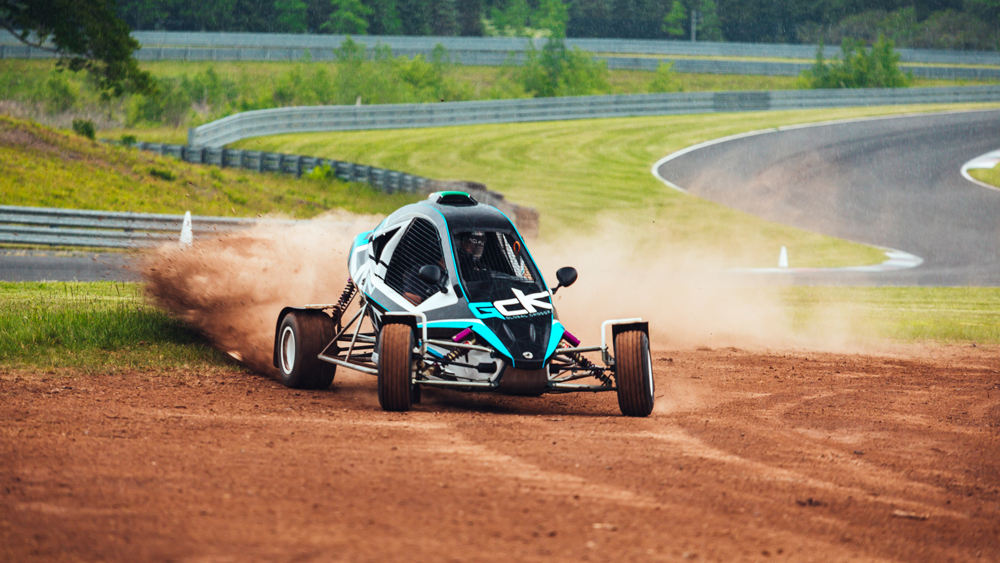 Coming down into Turn 1 on the Monticello Motor Club (MMC) track while at the top of sixth gear is always a tricky thing. You’re braking downhill, and a challenging right-hand turn sits at the very bottom of the straightway. Right now, an engine at a 13,200-rpm redline is keening behind my head; I’m hard on the brakes; and the right-hander is coming up fast.

But I don’t turn the wheel. Instead, the vehicle screams off the track onto the grass. I twist the wheel now, and go sideways on the turf before cresting a slight rise and blasting back onto the paved track. But, 20 seconds later, I plow off the track again, spitting dirt from my rear wheels.

First-time mistakes on a racecourse? Nope. I’m piloting a “crosskart” race car, a buggy-style machine with a single seat, four knobby tires at each end and a 750 cc motorcycle engine mounted in the rear.

Maybe all that social distancing made the folks at New York’s premiere (and highly manicured) private track even more imaginative. The team at Catskills-based Monticello took out some trees in the center of its South Course, and turned it into a dirt-and-grass path that both intersects and joins up with the asphalt.

The result is a rallycross circuit that includes superfast, on-tarmac straights; a mad, blind dash up a dirt hill; and at least two potential jumps. Even better, they are making a wheel-to-wheel race out of the new course for members.

“We are calling it the Race of Champions,” says Ari Straus, the CEO of MMC. “It’s the ultimate ride-and-drive-spec racing series. Twelve drivers will race both Porsche Caymans and the rally buggies to decide who is the ultimate driver on every surface.”

The idea is audacious. The $37,500 buy-in price, for the entire three-race season, includes both a Porsche—with a roll-cage—and the Speedcar Xtrem crosskart. All will be specified exactly the same, and competitors will be assigned a car at random, negating any potential performance advantages.

Writer Jason H. Harper stands next to a Speedcar Xtrem for sense of perspective.  Photo by Christopher Szczypala, courtesy of Monticello Motor Club.

On the first half of race day, the dozen drivers will be broken into heats, and each will race three times in the Cayman, accumulating points. On the second half, they will race three more times in the buggies. Yeah, you read that right: Six races in a single day. “Sound like too much?” asks Straus. “Then the series is not for you.” At the end of the season, an overall winner will be crowned.

“Since we’ve opened, we’ve sent a couple dozen members to semipro and pro racing series,” says Straus. “But those series are really expensive to run, and take up a lot of time traveling around the country. This is a chance to do something unique, bringing some of those racers back. It’s also going to have a ‘big show’ kind of spectacle to it. Can you imagine those buggies racing in the dirt side by side?”

Even after experiencing the course and buggy myself, the idea seems wild—maybe the wildest race in the U.S. right now in the time of Covid-19, when most tracks are closed. (MMC is open, but carefully adhering to social-distancing guidelines.)

The crosskarts, built in Spain and hugely popular in Europe, are intensely fast. They have sequential gear boxes which require use of a clutch. There’s a handbrake, too, if you want to get seriously sideways, rally style.

Made in Spain, the single-seater has a sequential gear box, which requires use of a clutch.  Photo by Christopher Szczypala, courtesy of Monticello Motor Club.

During my very first session on an afternoon in June, the skies open up with rain and water beads on my helmet’s visor as I pummel down the track. (There are no front windows, only metal screens.) Surprisingly, the traction is sure and grippy, even on wet tarmac. As soon as the buggy hits dirt, though, I find I can toss it around, drifting with the addition of left-foot braking.

But then I watch as two buggies take on the course simultaneously, piloted by MMC’s resident rally expert, Chris Duplessis, and an Irish rally driver, Barry Mckenna (who imports the buggies for the club).

The Speedcar Xtrem has a 750 cc motorcycle engine mounted in the rear, making the vehicle extremely fast.  Photo by Christopher Szczypala, courtesy of Monticello Motor Club.

The speeds they carry onto the grass and back onto the track are incredible. At one point, they’re both literally in the air, sideways. They somehow land upright and carry on.

“You may find this is the most fun you’ve ever had on four wheels,” says Straus, later, as I drip sweat and rain water. He just might be right.