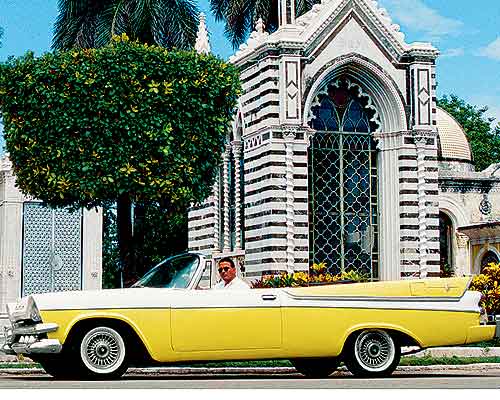 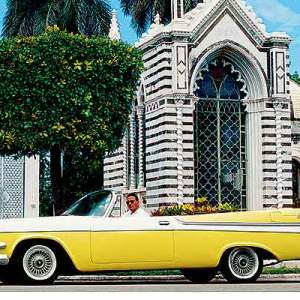 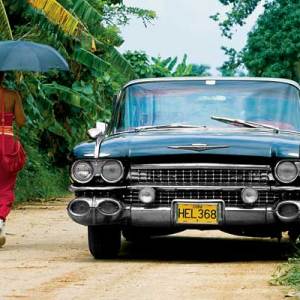 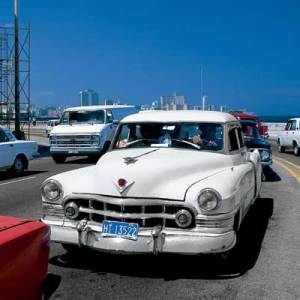 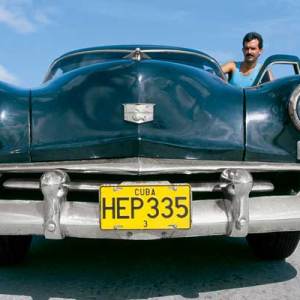 “Mira, señor,” says Eugenio, taking a moment from other distractions to demonstrate how the Caddy’s power seat—a slick, blood red Naugahyde bench on which I have been sliding around—still rises and descends with an audible hum. I am amazed, if only because this is Cuba, where keeping a car running requires a combination of providence, perseverance, and a genius for eclectic invention.

Eugenio is guiding me on a photographic hunt for classic autos, though his assistance is not needed. Every street features a parade of Eisenhower-era American iron. “That one’s mierda,” says Eugenio, employing a profanity to describe a bullet-nosed 1950 Studebaker Champion that we pass. “We call them Stu-desgracias”—disgraces. He guns the 390-cubic-inch V-8, and the Fleetwood roars along the road, which shimmers with microwave heat. Then the old man’s soulful eyes widen with pleasure. He has spotted a 1957 Ford T-bird convertible parked in the shade of a group of tall and tousled royal palms. Nearby squats a red 1949 Dodge Wayfarer, and a 1951 Hudson Hornet sits beneath a faded circa-1950 Coca-Cola sign that swings on rusty hinges in the breeze eddying in off the sea. The cobblestoned streets of Santiago de las Vegas, lined with once-glorious colonial edifices, are littered with corpulent Chevys, chrome-laden Chryslers, and other voluptuous dowagers that embody the sensational styling of Motown’s glory years.

The big-boned Cadillacs, however, draw my attention. They are everywhere, wallowing through the streets on sagging tires. In his book Driving through Cuba: Rare Encounters in the Land of Sugar Cane and Revolution (Simon & Schuster, 1990), author Carlo Gébler writes about rummaging from one end of the isle to the other in search of a 1957 Cadillac Eldorado Brougham. The pillarless, handbuilt sedan with a brushed stainless steel roof and Dagmar bumpers (named for a buxom blond actress) was the most sumptuous Cadillac ever made. It even had a built-in atomizer filled with Lanvin perfume. Only 704 Eldorado Broughams were ever produced, and each cost an eye-popping $13,074—more than a Rolls-Royce of the time. Gébler’s quixotic quest proved fruitless, yet it remains likely that at least one Cuban Brougham is awaiting discovery. After all, on the eve of the revolution, no other city in the world boasted as many Cadillacs per person as did Havana, and despite more than four decades in which not a single Cadillac has been imported, this is still the case.

The oldest Cadillac in Cuba is a 1905 4-cylinder Model D that now resides in Havana’s Depósito del Automovil. The U.S. military administration (1898–1902) paved the way for its arrival when it laid blacktop on Havana’s potholed, mud-puddled streets following Cuban independence. Over the next two decades, an appetite throughout the world for Cuban sugar enabled the island to become the wealthiest of the tropical nations. At the peak of the boom in 1920, the year of the “dance of the millions,” sugar export revenues more than doubled, from $455 million to $1 billion. The bubble burst soon thereafter, but Cubans had already developed a taste for deluxe yanqui autos.

Cuba was only a 96-mile ferry ride from Key West, so the costs of shipping the autos from the United States were low, and because the peso and dollar were of equal value, no problems of foreign exchange existed. In addition, Cuba had fallen under the sway of Madison Avenue, which treated the island as an extension of the U.S. mainland, though the advertisements, of course, were in Spanish. U.S. auto manufacturers sponsored radio programs and broadcast their message of “North American prosperity within everyone’s reach” to a population eager to emulate the American Dream. American celebrities played their part, inspiring an impressionable public to buy cars as glamorous as the stars who rode in them. Ernest Hemingway set the tone, swinging through Havana in his sleek V-12 Lincoln Continental convertible, accompanied by such illustrious friends as Ava Gardner, Gary Cooper, Marlene Dietrich, and Errol Flynn, en route to El Floridita for his daily papa dobles (sugarless double daiquiris).

Havana increasingly resembled a U.S. city as its large, financially comfortable middle class developed a proclivity for all things American, especially the latest coupes and sedans—possessions by which the status-conscious defined themselves. Among these residents was a dashing 24-year-old with a taste for stylish suits and the limelight. Following his graduation from the University of Havana law school in 1950, Fidel Castro Ruz was gifted a sparkling Pontiac Chieftain Eight DeLuxe sedan by his father.

Cuba continued to be deluged with American autos for half a century, culminating in the late 1950s, when no country other than the United States boasted so many Studebakers, DeSotos, and Cadillacs. During the 1940s, imports of U.S. autos increased fivefold, and that volume doubled by 1955, when Cuba recorded 125,000 registered passenger cars, the vast majority of which were built in the United States. That year, 40,000 Habañeros clamored for entry to a one-day espectáculo at Havana’s Tropical Stadium showcasing General Motors’ new line of autos, including a limited-production, 270 hp Cadillac Eldorado convertible. The car, which sold in the United States for $6,286, introduced to an idolatrous public the rear-pointing, sharp-enough-to-draw-blood, shark-fin blade.

In 1958, on the eve of the revolution, Cuba had more television sets than any other nation in Latin America, and U.S. automakers were beaming their advertisements directly into Cuban homes during episodes of Ozzie and Harriet and I Love Lucy. Only Argentina and oil-rich Venezuela enjoyed a per capita income greater than that of Cuba, and only Venezuela had more automobiles per head. Indeed, with 174,000 autos in 1958, Cuba had four times more per capita than Spain. Chevrolet Corvettes, Pontiac Catalinas, Imperial LeBaron Southamptons, Lincoln Continental Mark IVs, Packard Caribbeans—every luxury model was represented.

However, nothing symbolized Cuba’s prosperity so much as the profusion of Cadillac Coupe de Villes, Series 62s, Fleetwoods, and Eldorados. Stretching out in a long blaze of brightwork, the Eldorados and Fleetwoods were among the most exaggerated cars of the flamboyant ’50s, reflecting America’s peak moment of self-confidence. That moment coincided with  the heyday of Havana, when the roulette wheels tinkled and tourists flocked to los exhibiciónes (live sex shows). The Cadillac, a blend of couture and chrome that surpassed Imperial, Lincoln, and Packard in the prerevolutionary Cuban luxury market by a wide margin, was a perfect metaphor for Gen. Fulgencio Batista’s Babylon.

Castro regarded  Fleetwoods and Eldorados as symbols of Cuba’s malaise. How, he asked, could an island with a per capita income a mere one-sixth of that of the United States possess more Cadillacs per person than its giant neighbor? “Why were we buying Cadillacs when what we needed were tractors? We need tractors, not Cadillacs!” Castro protested in July of 1959, the year he seized control of the country.

However, the age of the American dream car in Cuba did not end when Castro came to power, or a year later when Eisenhower declared an embargo on U.S. exports to the island. Today, of the 450,000 cars in Cuba, officially fewer than 32,000 are pre-1960 American models. In reality, three times that number of prerevolutionary yanqui classics may still be on the road, by necessity, not choice, in a land where the state owns all other vehicles and the public transportation system is unreliable at best. Unlike many of their counterparts across the Florida Straits, Cuba’s Cadillacs are day-to-day beasts of burden, mostly sorry heaps of metal. Only a handful are shining examples of museum-quality preservation and restoration.

Eugenio’s Fleetwood is not one of them. Each spring and hinge creaks and rattles rheumatically. Even from a distance, its rusting iron suggests penury and evokes pity. I am surprised, then, when I spot, parked in the shadows, a gloriously voluptuous Cadillac Series 92 two-door fastback convertible that is as rust-free and radiant as the day it rolled off the assembly line in Detroit. The Cádila’s color is a deep garnet that is lustrous in the late afternoon sunlight, like a lush Beaujolais, and there is not a dent in the bodywork. “It’s owned by the Belgian ambassador,” chauffeur Luis Escandron explains wistfully as he puts the finishing touches on a spit and polish. This information is not surprising, for few, if any, Cubans could afford the cost of such a restoration.

“Let’s go for un paseíto,” Luis suggests, waving a Cohiba expansively. The door swings open, heavy on its well-oiled hinges. Eugenio looks on with obvious yearning as I climb in and settle myself on a reupholstered passenger seat that is as comfortable as a living room chair. Luis cranks the ignition, and the Caddy’s original, overhead-valved 331 cid engine growls contentedly behind the car’s grinning grille. The 92 rumbles down the street with a gutsy V-8 roar, but the interior is as quiet as a whisper. I feel drunk on molasses air, as the car heads toward the setting sun, like a long metal ghost leaving a slipstream that leads to Cuba’s past.

Christopher P. Baker writes more about Cuba’s wealth of Eisenhower-era American cars and the people who keep them running in his book Cuba Classics: A Celebration of Vintage American Automobiles, published by Interlink.