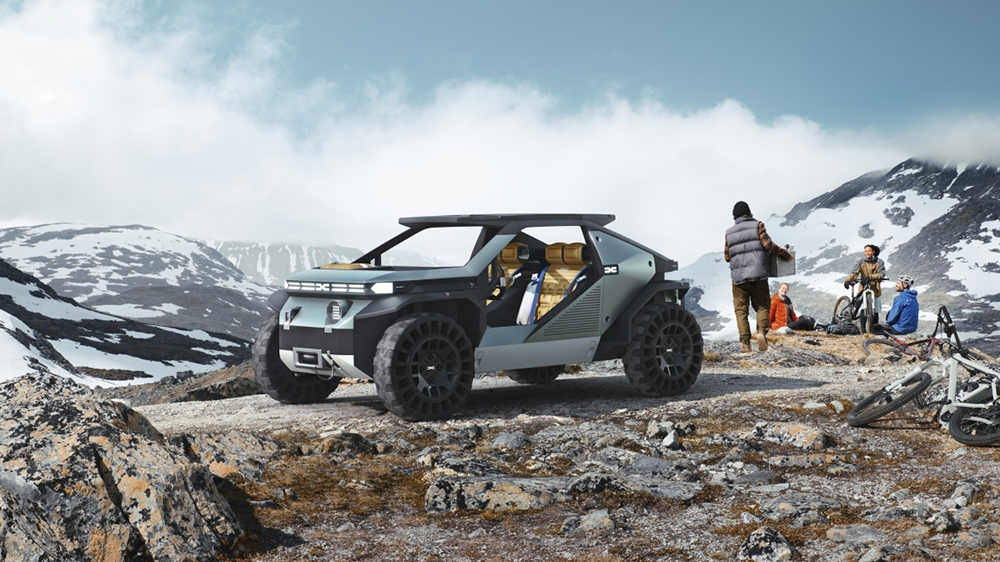 Dacia wants to help spread cyberpunk style outside of the city.

The Romanian marque, which is owned by Renualt, has just unveiled an exciting new concept car called the Manifesto. The vehicle is a futuristic buggy that will make its public debut at the Paris Motor Show next month.

Although it looks like something from a dystopian science fiction movie, the Manifesto was actually designed to help its driver and passengers better connect with nature. Because of this, the compact cruiser—it measures just 12 feet from bumper to bumper, though it still has room for four—has no windshield, windows or doors, allowing you to really take in your surroundings and all they have to offer. The angular 4×4 also features a single-strip headlamp that can be removed and used as a flashlight, as well as giant airless, all-terrain tires guaranteed to last as long as the vehicle since they are puncture-proof.

Dancia hasn’t revealed what kind of powertrain is in the Manifesto—though it does offer four-wheel drive—but was more forthcoming about some of the EV’s other forward-thinking features. The driver’s smartphone can be inserted directly into the dashboard, so that it can connect to the vehicle’s onboard computer and be used as an infotainment system, according to the brand. The fully waterproof interior is made from recycled materials like plastics and cork, making it easy to clean after a particularly messy adventure. The vehicle also features a modular YouClip system that makes it easy to add and swap off-roading accessories.

“At Dacia, we like to keep it real,” David Durand, the marque’s design director, said in a statement. “As we were developing and exploring new ideas, we felt we needed to push them past 3-D simulations and see what they look like in real life! As well as being a designer object, Manifesto Concept encapsulates our vision and combines a wide range of innovation—some involve extreme implementation, but they are still affordable for customers. We will be using a few of them on future Dacia models.”

Unfortunately, Dacia only envisions the Manifesto as a show car. All is not lost, though. the automaker said it is treating its stylish EV as a “lab for ideas” and that some of its “pioneering” features will pop up in the brand’s vehicles going forward.

Click here to see all of the photos of the Dacia Manifesto Concept.