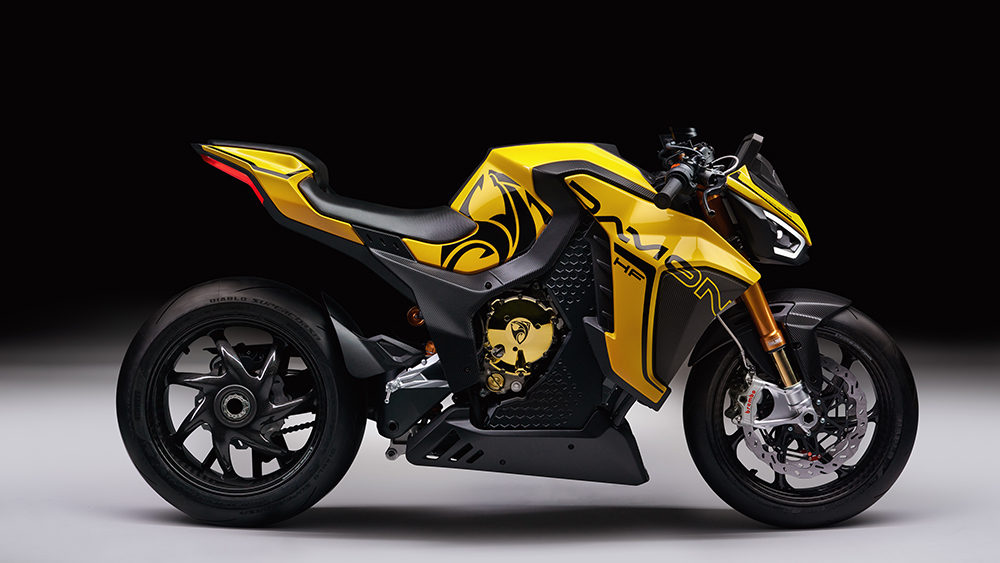 The aptly named HyperFighter, which was unveiled at the Consumer Electronics Show (CES) in Las Vegas on Tuesday, builds upon the Canadian outfit’s popular first model, the HyperSport, and was designed for a new generation of more eco-conscious bikers.

With a muscular silhouette, the stripped-down two-wheeler appears to pack all the attitude of a classic naked bike—judging by the sole picture Damon provided, at least. Like its predecessor, the emissions-free Hyperfighter is built around Damon’s HyperDrive technology and features an electric powertrain, which also received a CES 2022 Innovation award.

The model that was presented at the gadget-packed technology trade show is the range-topping Hypefighter Colossus. Priced at $35,000, it features a premium bodykit and wheels, along with a 20 kWh battery that promises 200 hp and 148 ft lbs of torque. This reportedly gives the Colossus the ability to zoom from zero to 60 mph in less than 3 seconds on its way to a top speed of 170 mph. It can also cover 146 miles on a single charge, according to the bike builder.

“Forget what you know about traditional streetfighters,” Damon’s co-founder and CEO Jay Giraud said in a statement. “Just as HyperSport has done to the sportbike segment, the HyperFighter stands to disrupt the streetfighter category with groundbreaking technology not found on any other bikes.”

Damon also has two other variants in the pipeline. The HyperFighter Unlimited 20 and HyperFighter Unlimited 15, which will set you back $25,000 and $19,000, respectively. The Unlimited 20 has the exact same battery and touted performance specs as the Colossus but is fitted with a standard body kit and wheels. The Unlimited 15, meanwhile, comes equipped with a 15 kWh battery that’s good for 150 horses. This gives the bike, which sports the standard body kit and wheels, the ability to reach 150 mph at full tilt and cover 120 miles per charge.

Each HyperFighter also comes with CoPilot, an advanced 360-degree warning system that uses radar, cameras and sensors to track moving objects and give you better situational awareness, as well as electronic ergonomics that allow you to position the handlebars and windscreen exactly to your liking. To top it off, the trio can also be customized with special body kits and graphics.

“We’ve built an incredible, technologically advanced motorcycle that will appeal to both long-time streetfighter enthusiasts and new riders,” Giraud added.

You can reserve your HyperFighter now with a fully refundable deposit (Colossus for $250 and HyperFighter Unlimited models for just $100) on Damon’s website.