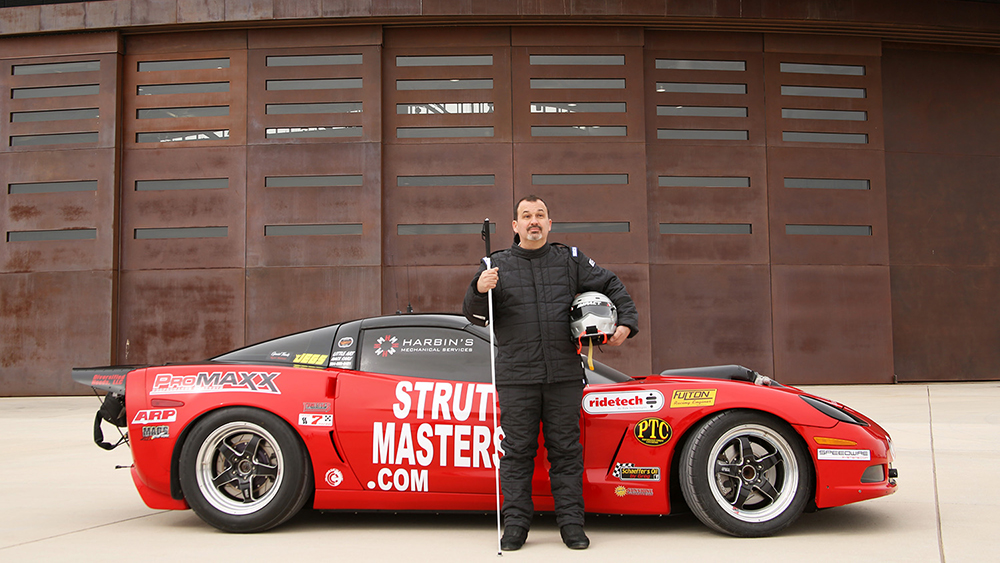 Dan Parker is ready to turn tragedy into triumph. After losing his sight following a horrific drag-strip crash in 2012, the determined 50-year-old is back behind the wheel with a goal of becoming the world’s fastest blind driver.

Parker is currently building a 2008 C6 Corvette to accomplish the feat, which will require he beat the current blind speed record of 200.9 mph achieved by Mike Newman in 2013. And the lifelong drag racer is confident he’ll succeed.

“I’m not a blind man trying to race. I’m a racer who went blind,” Parker states on his website.

Indeed, prior to the catastrophic accident—Parker hit a concrete barrier at 175 mph in a ‘63 Corvette—he had won multiple championship titles, including the Dixie Pro Stock and ADRL Pro Nitrous world championship.

Beyond his racing pedigree, Parker will rely upon an automated guidance system that will help him stay close to the centerline via audio cues. And if he veers just 20 feet off course, the system will automatically shut down the car. Parker previously tested this system on a 153.8-mph run at Spaceport America in February and didn’t veer more than five feet from the centerline, according to Car and Driver.

Parker has painted his new ‘Vette in the same crimson color as the model from the accident. He is also working on a spate of modifications, including a crucial custom exhaust which features three mufflers to ensure that he can hear the audio cues.

The fearless racer has used the custom guidance system to make history before. In 2013, Parker became the first-ever blind man to race a motorcycle at the Bonneville Salt Flats, using the audible feedback to stay on course. The following year, he set the class record with no exemptions for blindness.

The driving record attempt is likely to happen this fall, and Parker is currently raising funds by selling writing pens that he machines from start to finish by himself. Is there anything this guy can’t do?