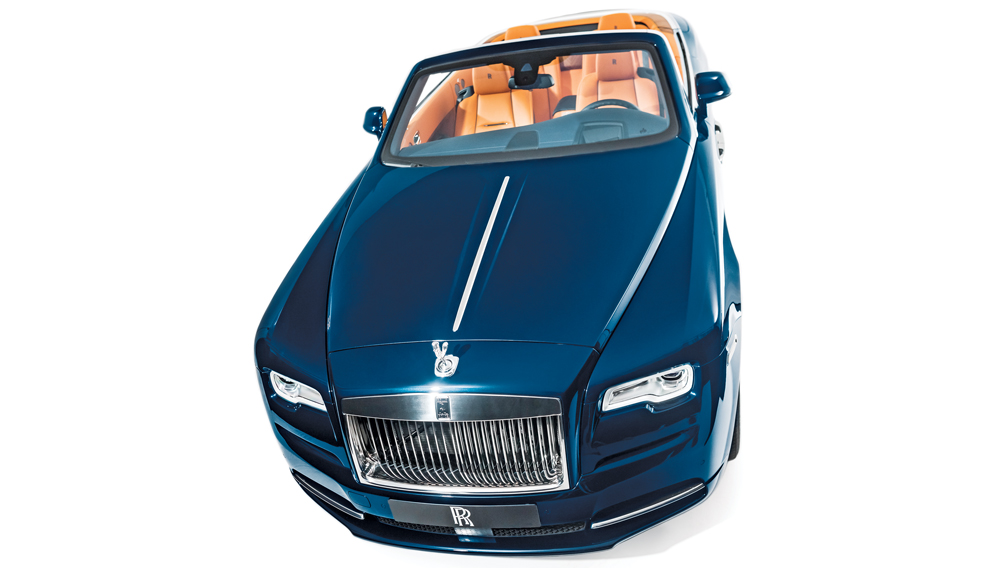 Rolls-Royce’s latest convertible signals the arrival of a new day for the venerable marque.

Since launching the Phantom in 1925, Rolls-Royce has bestowed menacing and otherworldly names on its models: Ghost, Spirit, Seraph, Wraith. None is warm and fuzzy; each confers gravitas. Now comes the Dawn, a two-door, four-seat luxury convertible—or rather a drophead coupé, as it is called in England, where a hood is a bonnet, a canvas top is a hood, and a trunk is a boot.

Such words may have company founders Charles Stewart Rolls and Frederick Henry Royce spinning in their book-matched, burl-veneered pine boxes, but they are not outrageous in 2015—not when one considers the marque’s younger clientele and the fact that the car is designed to be a very “engaging” Rolls-Royce. The Dawn offers a glimpse of the new mind-set taking hold at a company sometimes uncharitably regarded as the most serious and hidebound of luxury carmakers. The soon-to-be six-model lineup is distinctly bifurcated, with the stalwart Phantom Series II sedan, coupe, and convertible holding a stiff upper lip, while a more athletic Ghost Series II four-door is accompanied by the even sportier Wraith grand tourer, its unruly kid brother. The Dawn, which Rolls-Royce expects to begin delivering in April with a starting price of $325,000, joins the latter group.

A seat behind the wheel provides the thrill of driving the Dawn, but the front-seat companion gives up nothing, nor do the passengers in the sinfully sumptuous rear bucket seats, who enjoy a truly commodious space with plenty of room for their heads, shoulders, and legs. A drive in a Rolls-Royce is meant to be a social experience, and so when the Dawn’s six-layer fabric top is raised, the cabin is quieter than that of any other convertible, according to the company. After all, quiet can be sexy.

The inspiration for the Dawn’s name and design is the Silver Dawn, which Rolls-Royce produced from 1949 to 1955. The name reflected the rebirth of a nation and the carmaker after World War II. (Rolls-Royce had ceased auto production during the war.) The Silver Dawn was the first Rolls-Royce offered with a factory-built body, though the company also produced 28 Silver Dawn dropheads with bespoke coachwork. An example from 1952 was acquired by the factory to serve as a muse for the designers of the 21st-century Dawn.

This Dawn is unmistakably a Rolls-Royce, though four-fifths of the body panels are unique to the model, dispelling the notion that the new car is just a convertible variant of the Wraith. The shape incorporates that most important of Rolls-Royce’s historic design elements: the 2-to-1 body-height-to-wheel-height ratio. Combined with a long front end, a long rear overhang, and a high shoulder line, it gives the Dawn a stately presence. Eye-catching exterior details include painted or polished wheels, stainless-steel door handles and waistline trim, bumper embellishments, and visible exhaust tips.

The Dawn’s doors are a signature feature. Hinged at the rear and open toward the front, they allow unfettered entry and exit, especially for rear-seat passengers. Behind the rear seats is a horseshoe-shaped wooden deck that conceals the fabric top when it is stowed. The deck, as well as the trim on the door panels, the dash, and the central console, exemplifies the superlative woodcraft for which Rolls-Royce is known.

(Continues on next page….)

The Dawn that Rolls-Royce brought to Pebble Beach in August was finished in inch-deep Midnight Sapphire paint (with a hint of metallic). The interior was lined with brilliant mandarin-orange leather and featured open-pore Canadel trim. The soft, non-glossy finish of the wood veneer added a contemporary look antithetical to that of a polished-wood-paneled drawing room filled with top hats poking over high-backed chairs—an image that the Rolls-Royce name may still conjure.

The car’s polished-chrome, stainless-steel, and satin-finished fittings create reflective and sumptuous contrasts with the wood and leather, resembling jewelry instead of auto-interior components. Occupants can take pleasure in a gimbaled air vent, an organ-stop damper control, a doorsill threshold, or even an ashtray.

The visual delights are matched by aural ones, because the Dawn is equipped with Rolls-Royce’s Bespoke Audio system. It incorporates 16 speakers and a microphone that monitors ambient exterior noise and automatically adjusts the system’s volume and tone settings accordingly. Unlike those of other marques, the Rolls-Royce system was engineered in-house, not in partnership with a high-end audio brand. The entertainment and navigation systems are managed by the Spirit of Ecstasy Rotary Controller, which includes a 10.25-inch screen and touchpad and voice-command technology that eliminates clutter and complexity.

Many contemporary convertibles have a metal clamshell top, but only a fabric roof would do for a car the nature and size of the Dawn. The top’s profile is smooth, without the unsightly concaves of some fabric tops. It can be raised or lowered in 22 seconds and while the car is cruising as fast as 30 mph. Rolls-Royce calls the top’s graceful and quiet operation “the Silent Ballet.”

The Dawn is 4.5 inches shorter than the Ghost but still more than 17 feet long, which presented Rolls-Royce engineers with the challenge of making a chassis that was rigid yet still relatively light. It is made of aluminum, and the company claims it is the most rigid of any four-seat convertible. No doubt the Dawn will gently waft in the manner of a proper Rolls-Royce, but its tuned suspension with air springs and active roll bars promises that it will be as agile as it is powerful.

Long known for its reluctance to disclose power specifications, Rolls-Royce is uncharacteristically transparent with the Dawn’s numbers: The 6.6-liter, twin-turbocharged V-12 engine develops 563 hp and 575 ft lbs of torque, creating a massive yet effortless push that will take the car from zero to 60 mph in about 4.9 seconds. Top speed is limited to 155 mph.

The Dawn shares with the Wraith a satellite-aided 8-speed ZF transmission that employs GPS data to “view” the road ahead and select the ideal gear ratio for upcoming twists, turns, and traffic conditions.

Safety features include new software for the radar in the front bumper and the camera in the upper portion of the windshield. The software will more quickly prepare the brakes for emergency stops. The Dawn is also equipped with LED lighting that provides continuous full-beam intensity but automatically deflects the light from the eyes of oncoming drivers. Also for night driving, the Dawn comes with a thermal-monitoring system that will detect the body heat of unseen pedestrians or animals on the road and issue an audible warning to the driver.

Not long after Rolls-Royce launched in 1906, Autocar, England’s premier publication concerned with the then newfangled automobile, pronounced the company’s 40/50 hp model to be “the best car in the world.” The editors’ praise was a weighty third-party endorsement: “Best” meant modern, safe, reliable, and made to last. Fast-forwarding more than a century, the same descriptors seem to fit the Dawn, a car that blends the latest engineering and technology and manufacturing precision with old-world quality and, if you agree with Rolls-Royce, sex appeal.

The company is one of the few luxury brands across all segments that have maintained their currency while staying true to the principles of their founders. If the Dawn is the sexiest Rolls-Royce ever, it can only help the brand remain relevant, and that should keep the spirits of Messrs. Rolls and Royce content.