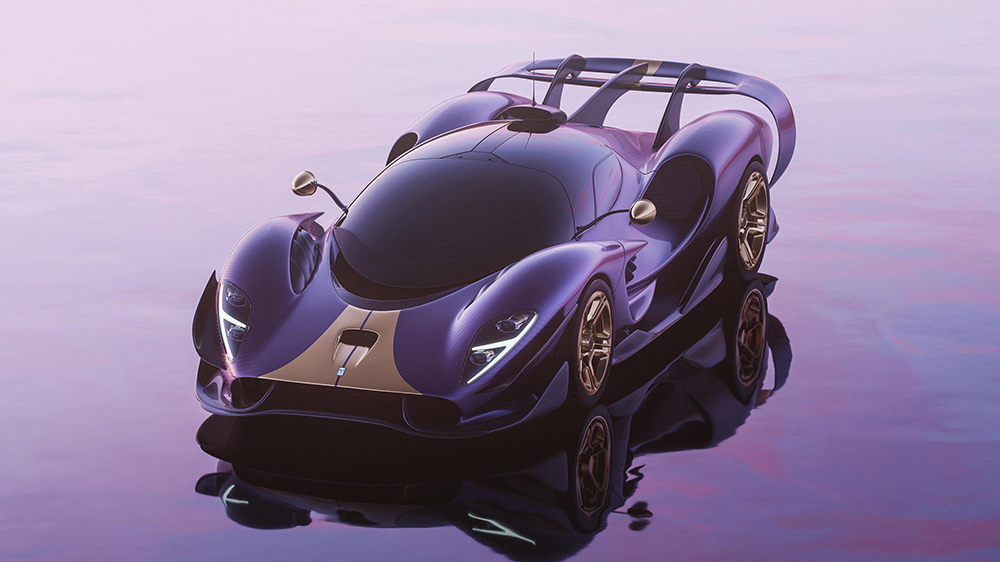 Looking to stand out at your next track day? De Tomaso has just the thing.

The reborn automaker has just unveiled its new track-only hypercar, the P900. The futuristic model pairs an outlandish design with an otherworldly V-12, all but guaranteeing it will turn heads when you take it for a spin around the course.

De Tomaso returned to the scene in 2019 with the P72, an homage to the Peter Brock-designed and Carrol Shelby-built P70 race car. The P900 takes its direct predecessor’s retrofuturistic design and turns everything up to 11. Whereas the P72 was sleek and elegant, the new hypercar is bold and aggressive. Its fenders are bigger, its lines sharper and it has a massive rear wing that wraps around its taillights, giving the rear a rocket ship-like feel. In no uncertain terms, it is a car designed to be as fast as possible.

Just as vital to achieving this goal is the car’s naturally aspirated 6.2-liter V-12. The bespoke mill is bigger than that found in the P72—which packs a supercharged 5.0-liter Ford Coyote V-8—and can pump out a hair-raising 900 horses. Maybe even more impressive is its 12,300 rpm redline. Yes, 12,300 rpm. The mill is mated to an Xtrac sequential transmission and has been specifically designed to run on carbon-neutral synthetic fuel, which should take some of the guilt out of speeding around a race track. No performance numbers were provided, but we imagine that will change the closer we get to release.

As powerful as the P900’s engine may be, it only weighs 220 kg, or 485 pounds, making it the smallest and lightest V-12 ever developed. Thanks to its lightweight mill, an all-new carbon chassis and body made primarily of carbon fiber, the car has a dry weight of just 900 kg—which is where the name comes from—or 1,984 pounds. This means that the car has a power-to-weight ratio of 1:1. As Motor1.com points out, the only other car that can claim that is the equally ridiculous Koenigsegg One:1.

De Tomaso plans to build just 18 examples of the P900, each of which will start at $3 million. Prepare to be patient, though. Deliveries aren’t expected to begin until the end of 2024. If you can’t wait, you can buy a P900 with a V-10 that will arrive during the second half of next year— but what’s the fun in that?