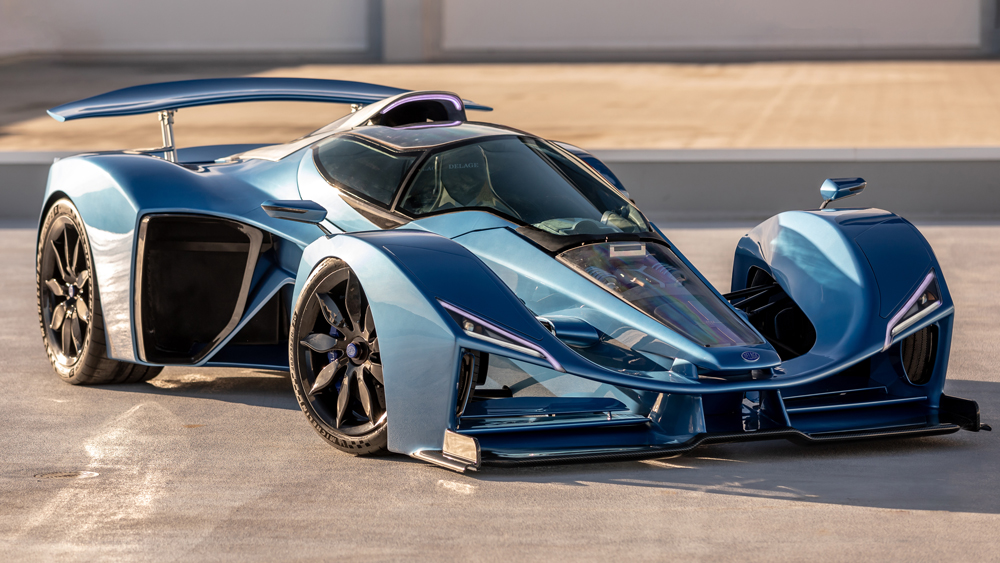 Photo by TED7, courtesy of Delage.

Storied automaker Delage is announcing its D12 hypercar and has selected RobbReport.com to officially break the news globally. The name Delage and the concept of a hypercar couldn’t seem more disparate, at least at first blush: an outrageously ambitious vision for a vehicle that has the Nürburgring Nordschleife’s lap record in its sights, and the achingly elegant French nameplate that’s been defunct for nearly seven decades.

The Delage D12 Hypercar  Photo by TED7, courtesy of Delage.

Putting power players like Bugatti, Pagani and Koenigsegg on alert would be no small feat for any marque, let alone one that’s been in hibernation. But if French entrepreneur Laurent Tapie has his way, a radical offering just might shake things up within the most rarified of automotive cliques.

Claiming an in-house developed, naturally aspirated 7.6-liter V-12 engine paired to a bespoke eight-speed automated single-clutch transmission housing an electric motor, the street-legal Delage D12 will be offered in two versions. The GT will harness 1,100 hp and have a dry weight of 3,086 pounds, while the 1,010 hp Club variant will have a dry weight of only 2,888 pounds. Both include extremely lightweight construction that draws inspiration from Formula 1, the top tier of motorsports.

Embracing what is perhaps the second-most extreme layout (next to a solo-seat configuration), the D12 puts the driver in a center seat and positions the passenger directly aft of the pilot. Think of it as an ultra-high-performance tandem go-kart for hopeless adrenaline addicts.

A carbon-fiber monocoque and carbon-fiber wheels—intended to funnel cool air into the brakes—are among the extreme lightweighting measures carried out mercilessly through every aspect of the automobile. Bodywork flows around the narrow fuselage, creating a taut hourglass between the extension of the front wheels and the wide swell of the tail. Windows wrap around the low-slung cockpit like a fighter-jet canopy, and a clear panel showcases the inboard suspension components. The look is gaunt yet powerful, like the lovechild between a track tool and a high-dollar exotic.

Delage D12 is the brainchild of Tapie, a self-professed speed junky who has been fueling his appetite for fast cars for the entirety of his adult life. A defining moment came when, at age 23, he scored the grand prize in an amateur competition put on by Porsche: an opportunity to pilot a Formula 1 car on a track. “It was absolutely incredible,” he recalls. “There’s nothing like Formula 1.”

Delage CEO Laurent Tapie in the cockpit of the D12.  Photo by TED7, courtesy of Delage.

Springboarding from the McKinsey & Company consulting firm in Paris, Tapie eventually formed several highly successful internet startups between 2000 and 2016. After selling his last venture and fulfilling his dream of moving his family to Miami, Tapie grew restless after about a year. Researching the burgeoning hypercar market, he found a business case for a small-batch production that called upon his love for Formula 1. He then set out to assemble a group of innovators capable of executing his goal.

The D12’s windows wrap around the low-slung cockpit like a fighter jet canopy.  Photo by TED7, courtesy of Delage.

“I hired an incredible team that I’m very proud of,” he says, adding that between a head engineer with six world titles under his belt, a technical director responsible for two touring world championships and development driver Jacques Villeneuve, among others, his group boasts an impressive 16 world championship titles.

The rights to the Delage name have been licensed from its official owners, Les Amis de Delage, with a purchase price pre-negotiated for an exclusive seven-year period, which started in 2019. The agreement includes a unilateral option for Tapie to purchase the brand beginning in 2022.

The D12 is scheduled to begin production early next year.  Photo by TED7, courtesy of Delage.

Though Tapie admits he originally “knew much more about racing cars than old cars,” researching the historic brand—established in 1905 and shuttered in 1953—revealed several striking hallmarks: a Delage race car with a complex V-12 dominated the 1927 grand prix season, and lore that the power plant inspired Enzo Ferrari to adopt the V-12 layout for his own creations.

The legacy is heady stuff for any red-blooded auto enthusiast, as evidenced by the fact that two D12s have already been presold through the Newport Beach Automotive Group.

While it’s still early days for the fledgling manufacturer, Tapie is quick to point out that new funding for Delage hails from four deeply invested billionaires, and that the French are no strangers to notable engineering achievements, from the Concorde and Airbus to the Dassault Rafale fighter jet and the Ariane rocket. As development continues with the goal of producing no more than a total of 30 cars, Tapie’s plan may be just audacious enough to fly.